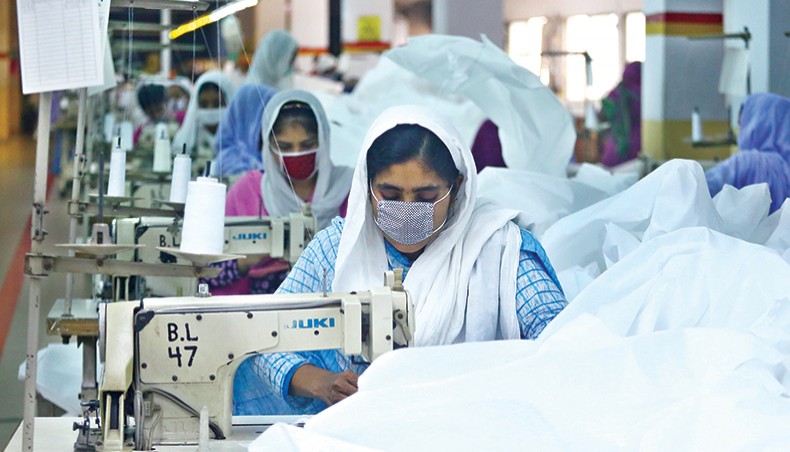 A file photo shows workers making personal protective equipment at a readymade garment factory on the outskirts of Dhaka. The country’s economy grew by 5.24 per cent in the last fiscal year 2019-2020 despite an unprecedented blow to economy in the last quarter of the year by the COVID-19 outbreak, according to the Bangladesh Bureau of Statistics provisional estimates. — New Age photo

The country’s economy grew by 5.24 per cent in the last fiscal year 2019-2020 despite an unprecedented blow to economy in the last quarter of the year by the COVID-19 outbreak, according to the Bangladesh Bureau of Statistics provisional estimates.

BBS, the statistical arm of the government under the planning ministry, on Monday released the data estimating the gross domestic product (GDP) growth for FY20 at much lower than the GDP growth rate at 8.15 per cent of previous FY19.

Earlier the government revised down the GDP growth target to 5.2 per cent for FY20 from original 8.2 per cent due to impact of the coronavirus outbreak.

Experts and economists, however, remained sceptical and raised eyebrows to the estimates saying that the higher economic growth was not matched with the actual economic situation and performance of economic indicators.

The growth figure is also inconsistent with the other indicators calculated by the BBS, they said.

International and local research organisations predicted that Bangladesh’s GDP growth would range between 1.6 per cent and 3.5 per cent in FY20 due to fallout of the coronavirus outbreak.

The World Bank projected GDP growth at 1.6 per cent, the International Monetary Fund at 2 per cent, UK-based Economist Intelligence Unit 3.5 per cent and local think-tank Centre for Policy Dialogue at 2.5 per cent for FY20.

CPD distinguished fellow Mustafizur Rahman said that the estimated growth rate was not consistent with the performance of economic indicators, including private investment, export and import, and the economic situation during the last quarter (April-June) of the fiscal year when economic activities remained almost halted.

‘Economy does not grow without investment,’ he said.

‘The BBS will have to revisit the growth figure while it will finalise the calculation removing the inconsistencies,’ Mustafizur told New Age on Tuesday.

The government revised down the growth target to 5.2 per cent before the budget when the full-year data for sectors was not available and surprisingly, there is no change in estimation even after three months when full-year data for the sectors is available, he said.

‘It seems that the BBS made the calculation based on data available in March and April,’ he said.

Both export and local market-based industries experienced a slump in production and sales in the period.

South Asian Network on Economic Modeling executive director Selim Raihan doubted whether the BBS took the impact of the coronavirus outbreak into account while making the estimates.

All indicators, except remittance, were in a downward trend in the year, which was not reflected in the GDP growth rate, he said.

He said that there were many inconsistencies, including calculation of investment and national savings, as entrepreneurs did not make new investment and people survived the pandemic on savings.

Most of the countries predicted either negative or very low growth rate for the year, but the BBS estimated the growth rate based on pre-determined framework without considering the impact on economy of the outbreak, he observed.