Beirut goes up in smoke 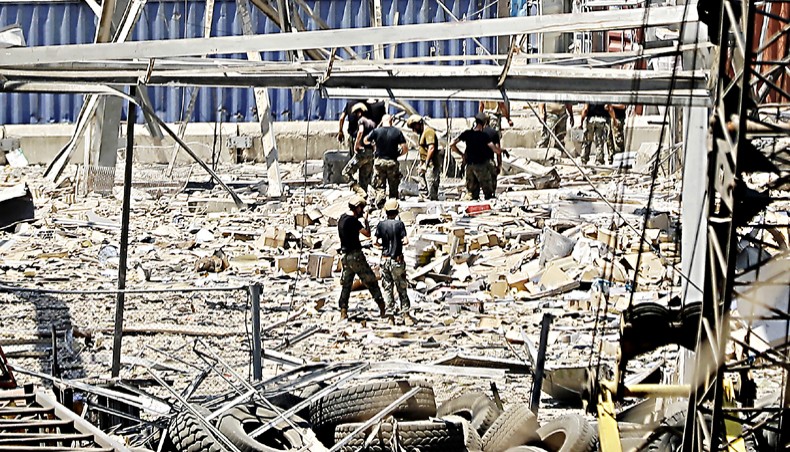 Rescuers and civil defence search through the debris at Beirut port’s silo on August 5 in the aftermath of a massive explosion in the Lebanese capital.— Agence France-Presse/Joseph Eid

TO SEE Beirut and its port area with a huge mushroom cloud hanging above is a truly surreal sight. But what is not surreal in battered Lebanese capital?

A big part of the downtown looks flattened, thoroughly ruined.

One of my Japanese friends based in Beirut exclaimed: ‘It looks like Hiroshima!’

Who is behind the carnage? What really happened? Nobody is claiming responsibility. Was it sabotage, a direct attack against Lebanon, or a politically motivated terrorist act?

What is certain is that the ‘earth moved.’ One of the explosions, equivalent to a 4.5-magnitude earthquake, ruined everything in its proximity. Blasts were heard all the way across the sea in Cyprus, while some 20 kilometres away, window panels at Rafik Hariri International Airport, got shattered.

FOR five years, I have been observing from my window and terrace this magnificent sight: tall, often snow-covered mountains, huge bay, and vast port area with cranes, tankers, and mighty container cargo ships.

Once there was a small fire in the port, and I could see each and every detail of it. But now, everything changed. Two explosions, one relatively small and one enormous, turned the entire port area of Beirut into a war zone, a target of carpet bombing. Or the aftermath of a nuclear explosion.

People running away, in horror. Women and children shouting, crying, clinging to each other. The number of casualties is still unknown. Preliminary reports speak of at least 73 persons killed, but there are most likely hundreds of those who lost their lives. There are those still buried under the rubble, burned beyond recognition. One entire fire brigade just ‘vanished.’ Red Cross reported at least 2,200 people injured. Soon after, the number shot up to 4,000. Several crew members on the UNIFIL vessel, which was docked in the Beirut port, injured. The horrible count goes up and up.

Red smoke is levitating above the coast. What is it, really? Speculations and preliminary analyses are the

The Canadian embassy began headcount of its staff. That fact has been confirmed.

What has been clearly a hoax is that the embassy sent scientific/medical warnings, which are now circulating all over the social media, such as: ‘It’s a dropped bomb with depleted uranium (red colour). Tell all your loved ones to get away and don’t inhale. Try to go in the opposite direction of the wind.’

Truth is getting mixed with the fake news. Whether it was a bomb is a very legitimate question. But the Canadian embassy definitely did not claim on its social media, that it was.

There is an ‘urgent message’ from the American University of Beirut Medical Centre, the most prestigious medical facility in the Middle East. It even carries its logo at the top of the page. But when I contacted AUBMC, the staff strongly denied sending such messages: ‘Everyone in Lebanon needs to stay indoor… From the look of the flame, the explosion looks nitric acid-based. Please stay inside!!!’

There is a long message from the American University of Beirut president, however, which begins with: ‘Dear members of the AUB community, I hope you and your loved-ones are safe and starting to recover from the catastrophic explosion which occurred earlier this evening in the Port of Beirut. We already know of thousands of injured and more than 67 dead. Property has been destroyed over an area of many square kilometres, including at AUB and AUBMC. Our hearts and our prayers are with all those injured or lost in this awful tragedy. We must do all we can, and some measure beyond that, to care for those injured and heal the terrible unseen wounds this has created. The AUBMC emergency department, our medical faculty, nurses and staff are all responding to hundreds of trauma cases, including a number of serious and critical cases, with great skill and professionalism…’

Why are rumours being spread? Who is benefiting? What are the plans?

Each and every piece of information has to be now verified. Scrutinised. Double and triple checked.

Each piece of ‘fake news’ or outright fabrication may lead to yet another ‘explosion,’ to the worsening of the political violence. Lebanon is at the edge. And always when it is; when it feels this way, thousands of innocent people die. Everybody who has been living here, everyone who understands its history, knows that it is exactly this way here.

It is obvious that there are certain groups in the country, who are interested in spreading chaos in this long-suffering, deeply injured land.

But there are also very legitimate sources that believe that this is an attack by hostile foreign states.

Some trustworthy security sources that I approached are brief in their analyses, and their preliminary conclusions are chilling: ‘Nuke hit ballistic missile warehouse. The red smoke is fuel.’

But I don’t know, yet; nobody knows. The situation is incredibly confusing. Everybody is still in shock and mourning.

Some fingers are pointing at Israel. Israel denies its involvement and is offering help instead. Trump claims it was a bomb, but does not elaborate.

RT reported earlier on the day of the blasts: ‘The secretary-general of Lebanon’s Christian Kataeb Party, or Phalange, Nizar Najarian, has been killed.’

Kataeb Party is an extremist, violent right-wing Christian party, which is in alliance with the pro-Saudi faction of former prime minister Saad Hariri.

MEANWHILE, Beirut inhabitants are frightened. Lebanon has been faced with enormous problems, for at least one entire year. From huge anti-establishment riots which began in 2019, to the outbreak of COVID-19 followed by lockdowns, severe economic crises, and financial collapse. Eventually, the controlled exchange rate between the Lebanese pound and the US dollar got abandoned, and the local currency went nose-diving; it got sharply devalued. For some time, people could withdraw only a small amount of their savings from the local banks.

Political confrontations have always been pounding Lebanon, but recently they have been on the rise. The country is home to countless political and religious parties and movements, as well as shaky and temporary coalitions. What is on the surface does not necessarily correspond with what is forming the foundations.

For instance, Hezbollah, which is an arch-enemy of Israel and which is now on the US terrorist list, has been actually the most effective social organisation, providing de facto social security net for both Muslims and Christians. But it is also a determined and powerful force, always ready to defend Lebanon against the Israeli invasions, therefore constantly on someone’s ‘hit list.’

Extreme right-wing Christians could always swing either way; from antagonising mistreated Palestinians and siding with Israel, to forming coalitions with Hezbollah. For an outsider, all this makes no sense. But, somehow, it does (often in a perverse way), at least for the Lebanese, and for those of us who have spent a long time in the country.

The explosions took place just a few days before the UN court of justice was going to read the verdict, in absentia, against four Hezbollah members, who were allegedly involved in the 2005 assassination of Rafik Hariri, former prime minister of Lebanon. Some believe there is a link, but I strongly disagree, knowing Hezbollah and its political goals. This attack is definitely not Hezbollah’s ‘style,’ nor would it be in the group’s interests.

Lebanon has always been a time bomb, with dozens of real terrorist organisations forming so-called ‘dormant cells’; all over the country, and naturally all over the city of Beirut. Their proximity to each other, their antagonistic nature, could lead to a catastrophe at any moment.

AL MAYADEEN, a left-leaning television channel which is close to both Hezbollah and South American TeleSur, reported in its Arabic service: ‘Major General Abbas Ibrahim told Al-Mayadeen that it is possible that the explosion came from the highly explosive materials that had been confiscated some time ago, adding that course of investigations cannot be anticipated and when they are finished we will circulate confirmed information.’

For his part, the director-general of customs announced that nitrate is the cause of the huge explosion in the port of Beirut.

As for the minister of the interior, Mohamed Fahmy, during his inspection of the Beirut port, he said, ‘Investigations must be awaited to find out the cause of the explosion.’

The latest by Al-Mayadeen restated that what exploded was ‘Ammonium Nitrate.’ And Al-Mayadeen is closely connected to Hezbollah.

MAKI, a Japanese aid worker, based in Beirut, commented: ‘Hope it’s not nuclear. This mushroom shape of the smoke is very worrying.’

Rana, a Lebanese UN staff in Beirut, shared her thoughts: ‘A lot of speculations are going around: an accident in the fireworks storage, an Israeli attack on Hezbollah or army weapons. Nothing is certain right now, except that there are tremendous damage and destruction.’

Before the explosions, apparently, there was a drone circling above the area of the disaster. The footage is clearly depicting its presence in the sky. People are demanding an explanation.

As no one is claiming responsibility, it appears that for at least some time, there will be many more questions than answers. But that is much better than rushed conclusions.

The tragedy is enormous. The entire country is in shock. Emotions are running high. One wrong move and this entire part of the world could go up in flames. Again.

Right now, the most important is to tend to thousands of wounded, bury the victims, and investigate thoroughly and cool-headedly.

This may be the most difficult, the most dangerous moment for Lebanon since the end of the civil war. No time for sectarianism. The country has to unite, grin its teeth, and stoically fight for its very survival.

Those of us who love and miss Lebanon, despite everything, will be supporting it, as much as we can.