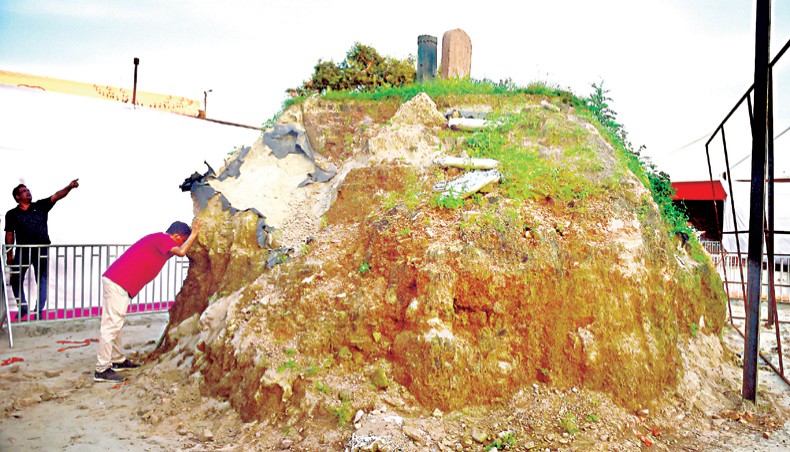 A man leans over of a mound of soil inside the proposed area for a Ram temple, where India’s prime minister Narendra Modi took part in the ceremony of laying the foundation stone of the temple, in Ayodhya on August 5. — Agence France-Presse/Sanjay Kanojia

IN THE past week, India’s prime minister Narendra Modi, dressed like a priest-king in a saffron scarf and a silver crown, performed a sacred ritual in Ayodhya to found a new Hindu temple on a site where for hundreds of years, the historic Babri Mosque had once stood. The state-sponsored ceremony was meant to show the transformation of India from a secular-nationalist republic into a Hindutvavadi state where minorities such as the Muslims do not count any more. The ceremony was broadcast everywhere inside India. Even the New Yorkers had to witness the transformation.

Modi’s Hindutvavadi supporters, the American Indian Public Affairs Committee, decided to lease giant screens in Times Square in Manhattan on August 5 to display images of the Hindu god Ram and a temple to Ram being inaugurated that day in India by Modi. Not all the New Yorkers of the South Asian descent, even Indian origin, were, however, enchanted by India’s transformation under Modi. There were demonstrations for and against the display in Manhattan of the ceremonial ground-breaking of the temple. While the plan to project an image of the proposed temple on the high-profile Nasdaq screen in Times Square did not materialise, one digital board showing the temple did air over the Hershey’s store for a short period. As their celebration of the temple appeared on a giant screen, the ‘Indian community’, or, more correctly, the acolytes of Modi’s Hindutva, distributed sweets in Times Square.

The date also coincided with Modi’s annexation of Kashmir a year ago. On August 5, 2019, the BJP government unilaterally suspended the special status of Kashmir, a move that led to Kashmiris being subjected to the suspension of all civil liberties. As one Indian author succinctly put, ‘[T]his brazen celebration will also serve to remind Muslims in India of their subjugated status in every way, a reminder that nothing is available to them in Modi’s India, neither history nor geography.’ Modi’s two election victories have already shown that the Muslims can be safely ignored in new India.

There was no condemnation in the Indian media this time. The Hindu Indians have been Modi-fied by Modi’s mantra of Hindutva. There was no protest rallies inside India, or so it seems. It was a far cry from the days of demolition of the historic mosque. When the Babri Mosque was demolished on December 6, 1992 by the Hindu mob, led by the Vishva Hindu Parishad, the general revulsion was so great that Modi’s predecessors claimed that they were ashamed of their co-religionists. In the aftermath of that demolition, some 2000 Muslims were slaughtered in India, mostly in Gujarat where Modi was the chief minister.

Now, Hindutva has captured the soul of India. It is so complete that television anchors broke into devotional song and newspaper frontpages looked more like religious calendars than broadsheets.

Perhaps not everyone is mesmerised by the crimes of Hindutvavad. One prominent public intellectual, Pratap Bhanu Mehta, wrote: ‘This temple is the first real colonisation of Hinduism by political power. I feel chained like never before.’

Hindu supremacists have for long claimed that the Babri mosque was built on the spot believed to be Ram’s birthplace. As credible historians have shown there is no truth in such claims. Nonetheless, in Modi’s India, the Supreme Court, on November 9, 2019 ordered the entire site (2.77 acres) to be handed over to a trust to build the Hindu temple. It also ordered the government to give an alternative five acres of plot to the Sunni Waqf Board.

Zahiruddin Muhammad Babur, the founder of the Mughal dynasty, was probably the best of the Mughal rulers of India who was known for his sharp intelligence, love of gardens and architecture, eloquence in speech and writing, and benevolence and love for his son Humayun, let alone chivalry in the battlefield.

The absence of running water, outside rivers, distressed Babur more than anything else in India. He was put off by the primitive irrigation techniques he witnessed: ‘In Agra, Chandawar and Bayana they irrigate by means of the bucket. This is a laborious and filthy method. A forked stick is raised next to a well and across the fork a pulley is fastened. A large bucket is tied to a long rope, which is thrown over the pulley. One end of the rope is tied to an ox. It takes one person to lead the ox and another to empty the water from the bucket. Every time the ox is led out to pull up the bucket and then led back, the rope is dragged through the ox’s path, which is sullied by ox urine and dung, and then falls back into the well. For some types of agriculture that need irrigation, water is carried in jars by men and women.’ Five centuries after he wrote those words, the method he described is still practised in parts of India.

Although Babur could not transform the North Indian plain into the undulating countryside he preferred, he made up for it by constructing a series of symmetrical gardens on the banks of the Yamuna, devising a method of raising water from the river and sending it coursing through qanats and down terraces. His nobles imitated his fondness for gardens, and, thus, ‘In unpleasant and inharmonious India, marvellously regular and geometric gardens were introduced. In every corner were beautiful plots, and in every plot were regularly laid out arrangements of roses and narcissi.’

Babur’s son Humayun fell seriously ill when he was a young man. Day by day, his condition became worse, until death seemed imminent. The most eminent doctors were called in, but no one was able to cure him. They all said his days were numbered. Babur was advised by a saint to pray to Allah and to make a great sacrifice.

The emperor Babur asked, ‘What kind of thing should I sacrifice?’

The saint replied, ‘Give away the Kohinoor diamond. It is the most precious.’

But Babur said, ‘The Kohinoor is my son’s possession. What kind of sacrifice would that be? I have to sacrifice something of my own. I have so much wealth and such a vast kingdom. But the most precious Kohinoor diamond is not mine. Therefore, I cannot sacrifice it. And even if I did own the Kohinoor, it would not be a real sacrifice to give it away. Even if I were to give away all my wealth and power — my entire kingdom — I do not think this is the most precious sacrifice that I could make. My life alone is most precious. There is nothing dearer to me than my own life. Humayun is my eldest and dearest son. I am ready to give my life for my son.’

After saying this, the emperor folded his hands and circled his dying son’s bed three times, praying to Allah. He said, ‘Allah, everybody is telling me to offer You the most precious thing so that You will kindly save my son’s life. I feel that my life is the most precious thing I have to offer. Please take my life instead of my son’s. Let me die in his place, and let him live on earth. This is my only prayer and my most willing sacrifice.’

To Babur’s wide surprise, after he had completed three rounds, his son stood up completely well. But immediately Babur fell deathly ill.

Humayun wept with gratitude and love for his father. He said to Allah, ‘My father is going to die, but I shall eternally treasure my father’s fondness for me and my father’s implicit faith in Your Compassion.’

Allah listened to Babur’s prayer and in three months, Babur died. This is the kind of love that an earthly father can have for his beloved son. (Sri Chinmoy, The Moghul Emperors, Agni Press, 2001)

It is simply unthinkable to imagine that Babur would destroy a Hindu mandir to construct a mosque there.

The Baburnama (Chronicles of Babur), which is a masterpiece of literature, does not mention either the mosque or the destruction of a temple. The Ramcharitamanas of Tulsidas (1574) and Ain-i-Akbari of Abul-Fazl ibn Mubarak (1598) made no mention of a mosque either.

From an inscription in the now demolished mosque, it is said that the mosque was constructed by Mir Baqi, Babur’s general, in the year 935 AH or 923 AH. ‘By order of King Babur whose justice is a building reaching to the mansions of heaven, this alighting place of the angels was erected by Meer Baquee, a nobleman impressed with the seal of happiness. This is lasting Charity in the year of its construction what declares in manifest ‘that good works are lasting.’ (The anagram ‘good works are lasting’ represented the year 935. ‘From the Tughra: There is no God but Allah, and Muhammad is the Prophet of Allah. Say, O Muhammad, that Allah is one, that Allah is Holy, unbegetting and unbegotten, and that He has no equal.’ (Kunal, Kishore, 2016, Ayodhya Revisited, Prabhat Prakashan)

Nothing good of that Mughal history probably matters to most Indians today who seem elated by Modi’s triumphant entry into Ayodhya as their man in charge rallying them to a new direction that is distasted by all minorities but celebrated by most Hindus. India’s Modi-fication is complete or so it seems for a foreseeable future. He has been able to give enough oxygen to hate to spread it like a COVID-19 amongst his Modi-fied Indians.

Dr Habib Siddiqui is a peace and  rights activist.