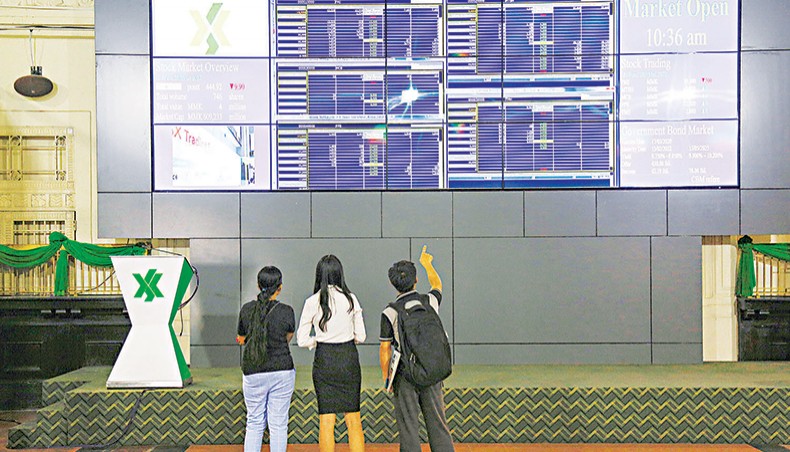 A file photo shows people monitoring stock prices and the index displayed on a large video screen at the Yangon Stock Exchange in Yangon on March 20, 2020. Global stock markets rose on Monday, boosted by hopes of a US stimulus package that helped to offset American-China tensions ahead of key trade talks this week.— AFP photo

Global stock markets rose on Monday, boosted by hopes of a US stimulus package that helped to offset American-China tensions ahead of key trade talks this week.

At around mid-session, stock prices in London and Paris were 0.4 per cent higher, while Frankfurt stocks edged up by around 0.2 per cent.

Traders said investors are keeping a wary eye on China-US trade talks planned for the weekend, which come after Washington imposed sanctions on several Hong Kong officials, further straining tensions between the superpowers.

However, US president Donald ‘Trump has helped boost sentiment after signing an executive order to provide a fresh unemployment payment for those impacted by the coronavirus’, noted IG analyst, Joshua Mahony.

Away from domestic policy, Washington has hit a group of Chinese and Hong Kong officials — including the city’s leader Carrie Lam — with sanctions in the latest salvo in a row linked to Beijing’s decision to impose a security law on the city.

Hong Kong media mogul Jimmy Lai, one of the city’s most vocal Beijing critics, was meanwhile arrested Monday under the security law, deepening a crackdown on democracy supporters.

Following his arrest, shares in his media group Next Digital rocketed 344 per cent.

Analysts said that the surge was fuelled by pro-democracy activists urging investors on social media to pile into the market to support the firm.

It comes after the White House set the clock ticking on forcing Chinese internet giants TikTok and WeChat to end all operations in the US, as part of a diplomatic-commercial offensive analysts fear will likely worsen leading into November’s American presidential election.

China slammed the sanctions as ‘barbarous and rude’.

US regulators have also recommended overseas firms listed in the US should be subject to local public audit reviews from 2022, which could cause Chinese firms to delist.

The White House has further angered China after health secretary Alex Azar met Taiwan’s leader in the highest level visit from the United States since it switched diplomatic recognition from the island to China in 1979.

The developments have put the spotlight on Saturday’s meeting of trade officials to review their ‘phase one’ trade deal signed in January.

There is a concern that the pact could be torn up as China has failed to meet certain criteria owing to the impact of the virus, a move most experts say would be devastating to a global economy that is already teetering.

Still, National Australia Bank’s Tapas Strickland said: ‘The running assumption in markets has been president Trump needed the phase one deal to succeed (as much as China) this side of the November elections to secure the midwest’ farming belt.

‘At the same time president Trump is running a hard China line into the elections,’ he added.

Elsewhere, the stimulus stand-off in Washington continued with Democrats and Republicans still unable to bridge their differences to push through a new plan.

However, after Trump on Saturday signed measures including handing Americans up to $400 a week extra in their unemployment benefits and protection from evictions, observers said that there was hope that politicians would work harder to reach a deal.