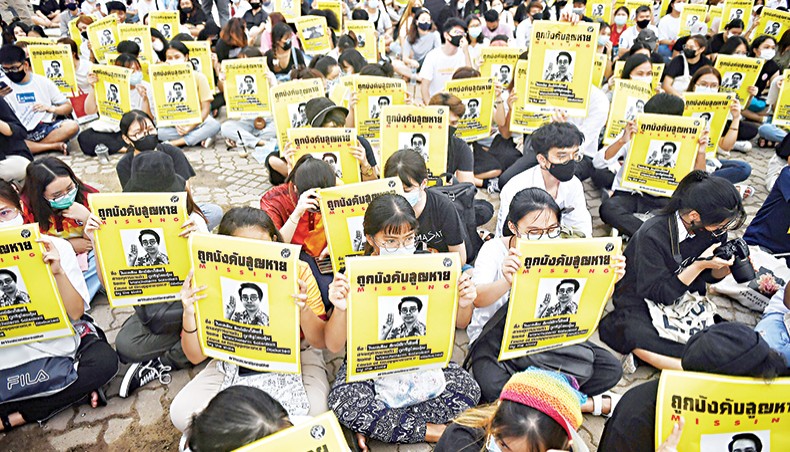 Thousands of people from all walks of Thai society came out in force Monday to an anti-government protest, the largest ever show of dissent targeting premier Prayut Chan-O-Cha’s administration after weeks of rallies.

Waving rainbow flags, acerbic signs and posters of missing pro-democracy activists, the demonstrators descended in waves to Thammasat University in the outer edges of Bangkok as the sun set.

Over the weekend, two activists were arrested under charges of sedition — and then released on bail — for their alleged role in a massive July 18 rally.

Organisers on Monday reiterated demands for a rewrite to a 2017 constitution, the parliament’s dissolution, and called for the government to ‘stop threatening the people’.

‘Us seniors must support the students,’ said a 70-year-old woman who declined to be named. ‘We must fight for our sons, daughters, nephews and nieces.’

The kingdom has long been locked in a cycle of violent street protests and coups by a putsch-happy army.

Demonstrators regard former army chief Prayut, who led the 2014 coup, as a remnant of Thailand’s junta legacy as his premiership was ushered in under a military-scripted charter in last year’s poll.

The pandemic has seized up Thailand’s economy, leaving millions jobless and angry at the inequalities of a society perceived to favour the kingdom’s elite establishment.

‘No more fake democracy,’ read a sign at the demonstration, which drew around 4,000 by nightfall, according to an AFP estimate.

‘This is the right time to send our voices to the government to let them know that we’ve had enough,’ said one university student, declining to be named.

Prayut has vowed to hold public forums with young people.

But army chief Apirat Kongsompong — an arch-royalist who in the past has angrily ranted about pro-democracy figures — called ‘hatred of the nation’ an incurable disease.

The new crop of protesters have waded into sensitive territory by calling for reforms to the draconian royal defamation law, which protects the powerful, super-rich King Maha Vajiralongkorn.

Earlier Monday, a group of royalist supporters marched to parliament to counter a pro-democracy rally where protesters were burning models of army tanks and the constitution.

Holding portraits of the monarch above their heads, the pro-monarchy group called for the protesters not to insult the king and carried posters saying ‘The people protect the king’.

Besides the arrests of two activists over the weekend, protest organisers in northern Phitsanulok province were detained for hours without charge, according to a Thai legal aid group.