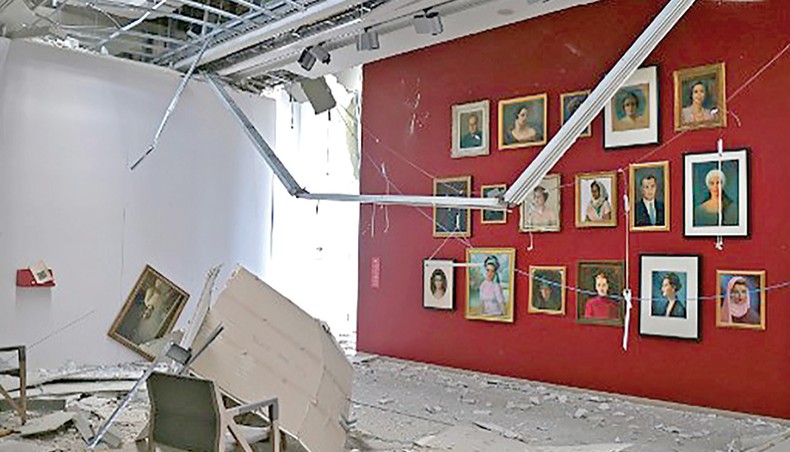 This handout image obtained from the Sursock Museum in Lebanon’s capital Beirut on August 8, 2020 shows a view of a damaged gallery inside the museum. — AFP photo

The monster explosion that levelled Beirut’s port darkened the Lebanese capital’s future but also blasted its past into oblivion, ravaging many beloved architectural and cultural treasures.

Gems of the city’s heritage, including some of the region’s most elegant Levantine villas with their triple-arch windows, were damaged beyond repair.

Many of old Beirut’s remaining colonial-era and earlier landmarks had already been damaged by 15 years of civil war and decades of government neglect.

The August 4 blast finished the job.

Days after the disaster, Tania Ingea gave a tour of her home on Sursock Street, which bears her relatives’ name and houses some of the most striking vestiges of the old Beirut aristocracy’s heyday.

‘It feels like a rape,’ says the heiress of the mansion, previously known as Palais de la Residence.

The devastating blast of a pile of industrial fertiliser, widely blamed on government negligence, was so powerful that it literally redrew Beirut’s coastline and skyline.

Ingea’s converted 18th-century palace now looks like it has been vandalised, with broken Ottoman-era artefacts in every one of both floors’ rooms.

Wooden panels inscribed with Arabic calligraphy have been blown off doors and walls and now sit piled in corners of the house.

Shards of stained glass more than two centuries old have been swept aside to one corner with the rest of the waste.

When Lebanon marks its centennial in three weeks, the port blast will have deprived it of some of the most graceful relics of that period.

‘There is now a cut between the present and the past,’ Ingea says.

‘It is an interruption in the transmission of memory of a place, of a family, of a portion of the history of the city.’

Just next door is the Sursock Museum, a cultural beacon in a country whose treasures are often poorly protected and showcased.

The mansion-turned-museum, which only a few months ago was housing a landmark Picasso exhibition, now tells the story of a city’s desecration.

Its facade is crumbling above a grand imperial staircase that curves upwards in an arch.

Jacques Aboukhaled, the architect who led renovation efforts there for around 20 years, says the ‘fabric’ of the building is safe, but pressure from the blast blew off almost everything else.

‘As it is a closed building, there was an implosion from every single corner,’ says the 68-year-old. ‘I did not expect to see so much damage.’

Aboukhaled estimated that the repairs would take more than a year and cost millions of dollars.

But he is not deterred: ‘I feel very attached to this building. It’s like our house.’

Built as a mansion in 1912, the palace opened its doors as a museum nearly 50 years later, as instructed in the will of its owner, Nicolas Sursock, who wanted his grand home converted after his death.

It reopened in 2015 after an eight-year closure for major renovation work, its new walls adorned with paintings from the country’s ‘golden era’ in the 1960s.

Between 20 and 30 artworks were damaged in the blast, mainly by flying shards of glass, according to a museum spokesperson.

They include the art collection’s main gem: a circa-1930 portrait of Nicolas Sursock, painted by renowned Dutch-French artist Kees Van Dongen.

The blast caused the painting to fall, cutting a slash into the canvas that stops right at Sursock’s forehead.

He couldn’t say the same for ‘hundreds’ of other heritage buildings already pockmarked and made frail by Lebanon’s devastating 1975-1990 civil war.

‘Most of the heritage buildings are damaged,’ Mortada said. ‘It’s going to take a lot of work.’

He estimated that repairs would cost ‘hundreds of millions of dollars’, but said they needed to be carried out urgently, before heavy winter rains sweep away what’s left.

A culture ministry team is conducting a damage assessment, but Mortada said he was banking on outside help, especially from France.

‘We need renovation works to happen as soon as possible,’ he said, warning of the coming rains.

‘If winter comes and they are not done ... this will pose a grave danger.’