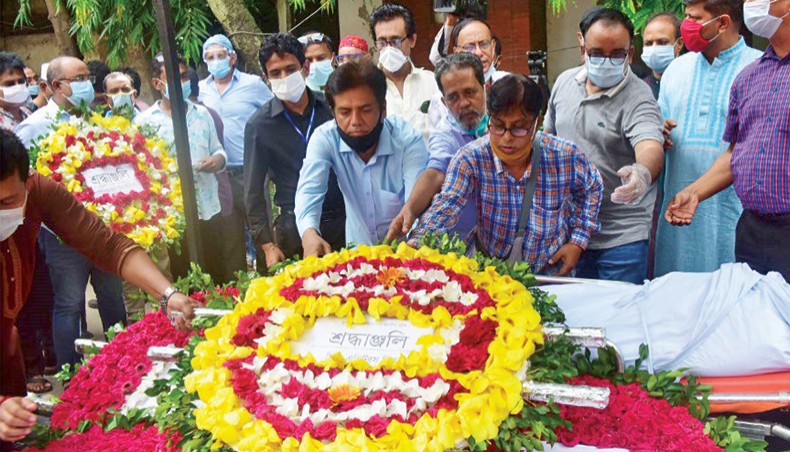 ‘My father always greeted everyone with a smile. He dedicated his entire life to music. He cared deeply about the young generation singers. I urge all to pray for his departed soul,’ Shawkat Ali Rana told New Age.

Alauddin Ali died on Sunday at the age of 69. He was earlier treated for pneumonia, cancer and other health problems. He went to Bangkok for cancer treatment in 2015 and 2019. His first namaz-e-janaza was held at Noor-E-Bag Masjid in the capital’s Khilgaon area. He was buried at the Martyred Intellectuals’ Graveyard at Mirpur on Monday.

Colleagues and peers of Alauddin Ali have expressed deep shock at his death.

‘It is a matter of deep regret that artistes never get the recognition they deserve when they are alive. I urge the government on behalf of all artistes to stand beside us in dire times. An artiste cannot survive on appreciations and accolades alone but also needs money to sustain himself and his family,’ he added.

Runa Laila said, ‘Alauddin Ali won hearts of thousands of music lovers with his creations. I met him for the first time when he was working as an assistant for music director Anwar Parvez. After he became a music director, I lent my voice to many of his songs.’

Gazi mazharul Anwar said, ‘Alauddin Ali was a multitalented person. We were really close and he was like a younger brother to me. He loved to visit me and we dined together a lot. A music director like him is not born every day.’

SI Tutul said, ‘Alauddin Ali was an extremely talented lyricist, composer and music director. I had known him since my childhood. He has been one of my greatest inspirations. He always motivated younger generation singers. I consider myself very lucky to have had the opportunity to work with him. Many of my songs have been composed by him.’

‘His death has left a huge void in country’s music scene. It is our responsibility to preserve his works for the upcoming generation. We will soon take the initiative to collect and archive his works,’ said Md Abdul Mannan Ilias.