French aid workers among eight killed by gunmen in Niger 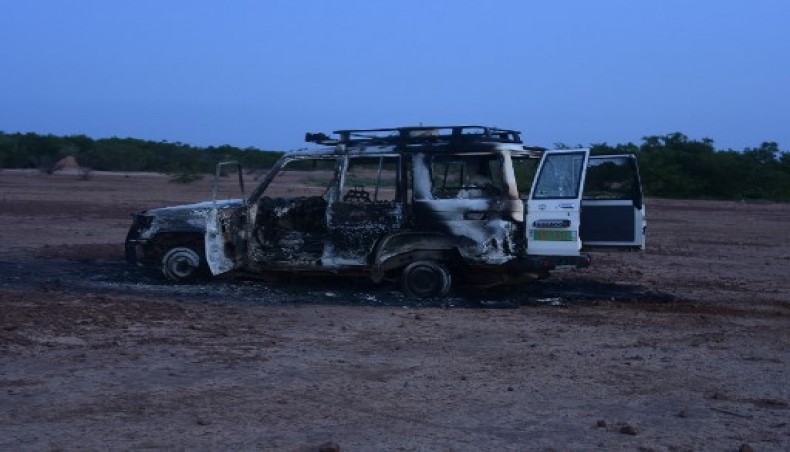 This August 9, 2020 image shows the wreckage of the car where six French aid workers, their local guide and the driver were killed by unidentified gunmen riding motorcycles in an area of southwestern Niger.

Gunmen on motorcycles killed eight people including a group of French aid workers as they visited a part of Niger popular with tourists for its wildlife, officials said.

‘There are eight dead: two Nigeriens including a guide and a driver, while the other six are French,’ the governor of the Tillaberi region told AFP on Sunday.

France confirmed its nationals were among the dead, without giving a figure.

French aid group ACTED said several of its workers were among those killed during a tourist outing.

It is believed to be the first such attack on Westerners in the area, a popular tourist attraction in the former French colony thanks to its unique population of West African or Niger giraffes.

‘We are managing the situation, we will give more information later,’ governor Tidjani Ibrahim Katiella said, without indicating who was behind the attack.

A source close to Niger's environmental services said the assault took place at around 11:30 am (1030 GMT) six kilometres (four miles) east of the town of Koure, which is an hour's drive from the capital Niamey.

‘Most of the victims were shot... We found a magazine emptied of its cartridges at the scene,’ the source told AFP.

One woman managed to escape but was later caught and killed, the source added.

‘We do not know the identity of the attackers but they came on motorcycles through the bush and waited for the arrival’ of the group.

The source said the victims' vehicle belonged to ACTED, which was later confirmed by Niger's home ministry.

- 'Barbaric act' -
The source also described the scene of the attack, where bodies were laid side-by-side next to a torched vehicle, which had bullet holes in its rear window.

The office of French President Emmanuel Macron said he spoke on the phone with his Niger counterpart Mahamadou Issoufou.

Both leaders condemned the ‘cowardly’ attack.

In Paris, a spokesman for the French army said France's Barkhane force, which fights jihadists in the Sahel region, had provided support to Niger's forces.

Forensic police were collecting samples ahead of the bodies being moved before night fell, the reporter added.

He lamented that ‘violent extremism’ was still rife in the Sahel region ‘despite the merciless war waged by national armies, the G5 Sahel joint forces and the Barkhane force’.

- 'Not considered dangerous' -
Around 20 years ago, a small herd of West African giraffes, a subspecies distinguished by its lighter colour, found a safe haven from poachers and predators in the Koure area.

Today they number in their hundreds and are a key tourist attraction, enjoying the protection of local people and conservation groups.

‘We all go to Koure on weekend outings because it's very easy to access,’ a Western humanitarian source based in Niamey told AFP.

‘Everyone goes there, even ambassadors, diplomats, teachers... it is not considered a dangerous zone at all. There are NGOs protecting giraffes there.’

However, the Tillaberi region is in a hugely unstable location, near the borders of Mali and Burkina Faso.

The region has become a hideout for Sahel jihadist groups such as the Islamic State in the Greater Sahara (ISGS).

The use of motorcycles has been totally banned since January in an attempt to curb the movements of such jihadists.

Numerous Europeans have been abducted or killed in the volatile region.

Two young Frenchmen, Antoine De Leocour and Vincent Delory, were killed after being kidnapped by jihadists from a restaurant in Niamey in 2011.