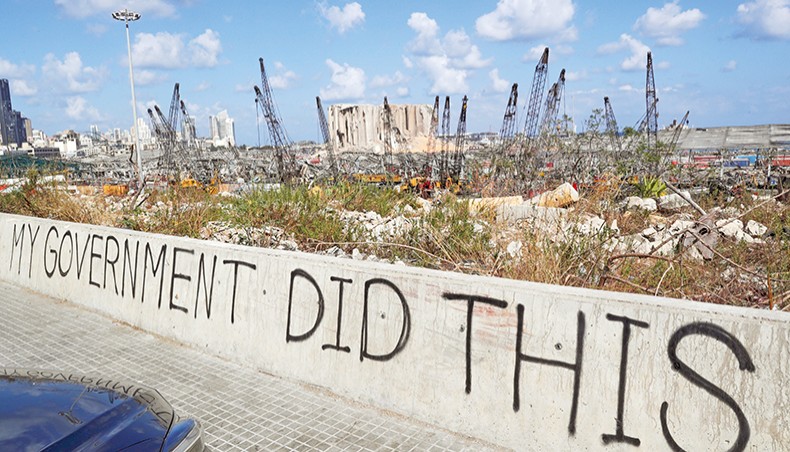 A picture, taken on Sunday, shows graffiti on the wall of a bridge overlooking the port of Beirut, the site of the explosion which killed at least 154 people and devastated swathes of the capital.  — AFP photo

Lebanese protesters enraged by official negligence blamed for Beirut’s enormous and deadly explosion vowed Sunday to rally again after a night of street clashes in which they stormed several ministries.

‘Prepare the gallows because our anger doesn’t end in one day,’ warned one message circulating on social media in response to Tuesday’s earthquake-strength blast of a huge pile of industrial chemicals.

While the exact circumstances that led to the blast are not yet known, protesters say it could not have happened without the kind of corruption and incompetence that has come to define Lebanon’s hereditary ruling class.

The protest camp renewed its demand that drove a first wave of anti-government protests last year for a wholesale removal of Lebanon’s leadership, but this time anger has turned into full-blown rage.

The calls for renewed protests came as French president Emmanuel Macron in Paris oversaw a UN-backed virtual donors conference to raise aid for Lebanon, a country already mired in a painful economic crisis.

The world must respond ‘quickly and effectively’ to the disaster, Macron warned, urging international cooperation ‘to ensure that neither violence nor chaos prevails’.

In Beirut, the fury on the streets has further shaken the embattled government of prime minister Hassan Diab, which saw its first cabinet resignation when the information minister, Manal Abdel Samad, quit Sunday.

‘After the enormous Beirut catastrophe, I announce my resignation from government,’ she said, apologising to citizens for having failed them.

More ministers looked set to follow but, according to local media, Diab was said to gauge how big the wave of resignations might be before perhaps announcing the government’s.

The revelation that Lebanese state officials had long tolerated a ticking time-bomb in the heart of the capital has served as shocking proof to many Lebanese of the rot at the core of the state apparatus.

The death toll from the explosion of a long-neglected pile of ammonium nitrate stood at 158 people and a staggering 6,000 wounded, many by flying glass as the shockwave tore through the city.

The blast, whose mushroom cloud reminded many of an atomic bomb, left a 43-metre deep crater at Beirut’s port, said a security official citing French experts working in the disaster area.

The mood was one of grief and fury in Beirut, a day after many of the dead were laid to rest and when thousands demonstrated in the biggest anti-government rally the country has seen in months.

The army Saturday used teargas and rubber bullets to clear hundreds of protesters from the central Martyrs’ Square, once more the epicentre of Lebanon’s protest movement.

The street violence left 65 people injured, according to the Red Cross.

In a new tactic, demonstrators temporarily occupied the foreign ministry building before being forced out by the army three hours later.

Protesters, some brandishing nooses, also stormed the economy and energy ministries and the Association of Banks, widely hated for cash shortages and asset freezes, before they were pushed back out by soldiers.

According to a group of lawyers supporting the protests, the security forces made 20 arrests on Saturday.

Rescuers meanwhile kept digging through the rubble of toppled buildings as hopes slowly faded of finding more survivors from the colossal blast that shook the country and was felt as far away as Cyprus.

It was triggered by a fire in a port warehouse, where a huge shipment of ammonium nitrate, a chemical that can be used as a fertiliser or as an explosive, had languished for years, according to authorities.

Diab said Saturday he would propose early elections to break the impasse that is plunging Lebanon ever deeper into political and economic crisis.

At least six lawmakers have also quit since the August 4 explosion.

The head of Lebanon’s Maronite church patriarch Beshara Rai joined the chorus of people pressing Diab’s entire cabinet to step down over a blast he said could be ‘described as a crime against humanity’.

The protesters demand the wholesale removal of Lebanon’s ruling class, which they see living in luxury while millions endure job losses, deepening poverty, power blackouts and garbage mountains piling up in the streets.

Working with the mostly youthful protesters are a group of retired army leaders whose state pensions have been decimated by the collapse of the Lebanese economy.

Politics in multi-confessional Lebanon is dominated by former warlords from the 1975-1990 civil war who years ago exchanged their military fatigues for suits, or by their offspring and nephews.

While there are Sunni Muslim, Christian and myriad other groups, the most powerful is the Shiite Hezbollah movement.

The protesters charge that Lebanon’s elite is fighting over the spoils of government, beholden to their personal and sectarian interests rather than the good of the nation.