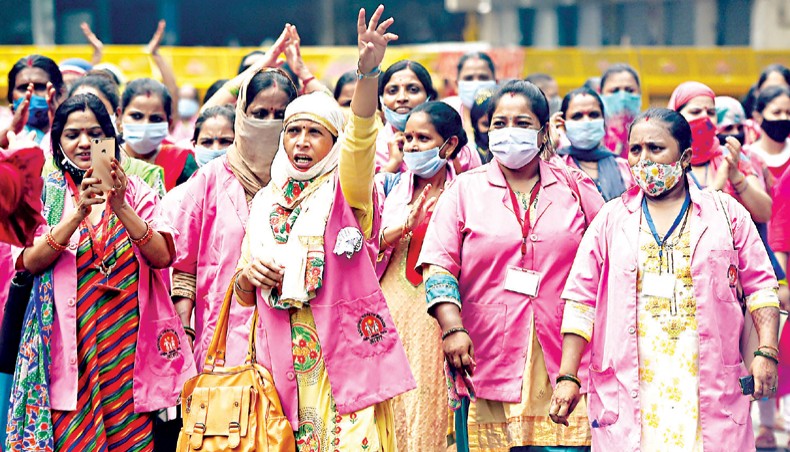 Accredited Social Health Activist shout slogans during a protest to draw attention to their plight of underpayment and lack of protection from the COVID-19 coronavirus infection, in New Delhi on Sunday. — AFP photo

Tens of thousands of female health workers on the frontline of India’s battle against the coronavirus have gone on strike to demand better pay and protection.

With India now registering the world’s third highest pandemic caseload at more than two million infections, the women in several states have gone on a two-day strike and plan a mass protest in Delhi on Sunday.

About one million of the Accredited Social Health Activists across India have been given the responsibility of hunting for suspected coronavirus cases, especially in villages and slums.

Officially they are referred to as volunteers and the government gives them an allowance of 1,000 rupees ($13) a month.

The health workers went on strike Friday and Saturday, and are demanding a 21,000 rupee monthly salary as well as a pension and anti-virus protection equipment and testing.

The women, whose protests have been building over the past month, say they have faced attacks and harassment in some villages.

Shiksha Rana, an ASHA in Delhi, said at least 200 have been infected with the coronavirus in the Delhi region alone.

The ASHAs were set up in 2005 and since then have played a key role helping to eradicate polio in India as well as helping with home births.

Rahul Gandhi, a senior leader in the opposition Congress party, said the government had been ‘blind and deaf’ to the work and demands of the women.