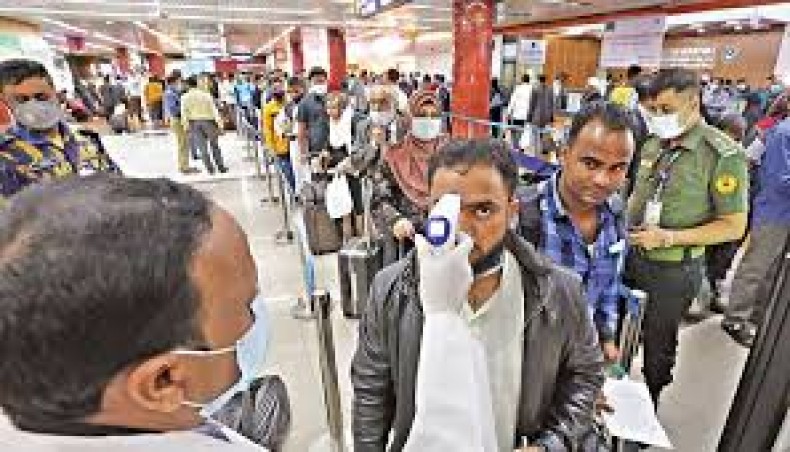 A file photo shows incoming passengers being checked with a hand-held scanner at the Hazrat Shahjalal International Airport in the capital amid the global coronavirus outbreak.  The Bangladesh Bank on Sunday issued guidelines, asking the country’s scheduled banks to introduce deposit products in the taka for non-resident Bangladeshis with a view to encouraging the NRBs to save their money in the country. — New Age photo

The Bangladesh Bank on Sunday issued guidelines, asking the country’s scheduled banks to introduce deposit products in the taka for non-resident Bangladeshis with a view to encouraging the NRBs to save their money in the country.

The central bank issued a circular in this regard on the day mentioning that the banks would be allowed to introduce deposit products for the NRBs along with facilitating them to operate non-resident taka account and foreign currency account.

An official of central bank said that the initiative would be of help to create safety net for the NRBs in Bangladesh.

They would not face financial difficulties on their permanent return to Bangladesh, the BB official said.

The initiative of the central bank came at a time when many expatriates were returning to the country after losing their jobs due to the economic woes in many of the job destinations of the country’s migrants due to the global coronavirus outbreak.

According to home affairs ministry data, 4.5 lakh expatriates returned home before the restrictions on international travel were imposed while the migration from Bangladesh plunged in the first half of the year 2020.

Allowing NRBs to open deposit accounts would also encourage the expatriates to send more money to the country. Amid dismal export earnings and slowdown in economic activities, inflow of remittance has brought some cheers for the country with the inflow hitting record $2.59 billion in July this year.

Sunday’s BB guidelines on allowing banks to open deposit accounts for the NRBs said that the products would be in the form of savings for a period of one year and above with monthly or quarterly deposit options.

The circular said that the deposit accounts would be credited in the taka after conversion of foreign currency, it said.

The conversion in the taka would be made against the wage remittance channelled through banks or exchange houses abroad.

The persons who are going aboard for employment will also be allowed to open the accounts without deposit. Banks were asked to provide competitive interest or profit against the deposit products.

Being the source of deposits in foreign currency, the circular asked the banks to encourage the NRBs with incentive in interest or profit.

Banks were allowed to extend loans to non-resident account-holder for meeting his/her personal requirements in the taka against the security of the deposit account upon fulfilment of usual lending norms.

On maturity, the bank must pay the proceeds of the deposits including interest or profit to the beneficiaries or nominees of the accounts.

At the desire of the account-holders residing abroad, the proceeds of the accounts on maturity may be credited to interest or profit bearing fixed deposit accounts to be opened in their names.

In case of NRBs residing in Bangladesh permanently after their return, the proceeds can be made available to them either in one-time settlement or pension-type monthly or quarterly settlement. The NRBs can continue to maintain the deposits from local sources after their arrival.

The circular included an option to repatriate payments abroad from the balances held in the deposits on maturity or before maturity for meeting subsistent needs on the BB permission.