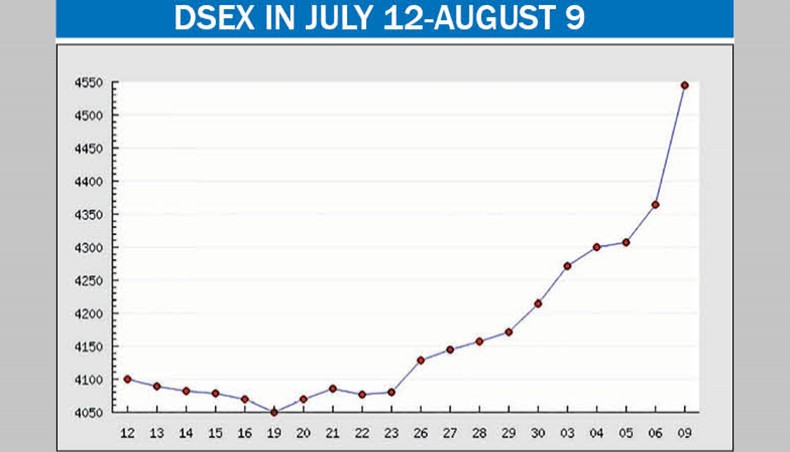 Dhaka stocks shot up by 180.32 points on Sunday, extending the gaining streak to the 11th trading sessions as investors flocked to the market amid the gradual improvement in economic activities in the country despite the coronavirus outbreak.

Sunday’s index was the highest after February 26 when the index was 4,549.11 points.

Trading on the bourse was held for four and a half hours for the first time on Sunday after the DSE decided to increase the trading hours for 30 minutes from the day.

The DSE core index started soaring from the very beginning on Sunday and increased more firmly with the time progressed as investors raised investments in the market amid growing confidence, market operators said.

After a drastic plunge, the market has started to bounce back gradually from the middle of June when some institutional investors took the initiative to inject fresh funds in the market.

Some large-scale investors began to join the rally from the beginning of July after assessing that the market would improve soon, they said.

Investors are also gaining confidence in the new commission as it took punitive actions against some wrongdoers on the market, they said.

The new commission also moved to diversify the market with new products and automate the market to enhance transparency of the market.

He also said that many investors turned their focus to the capital market as they apprehended that profit making from other means including deposits and bonds would decline due to the expansionary monetary policy announced by the Bangladesh Bank.

The country’s economy is improving as export earnings and remittance has soared in recent times that also created fund flow to the financial market, Moniruzzaman said.

The investors’ participation continued rising as the turnover on the bourse advanced to Tk 1,128.64 crore on Sunday compared with that of Tk 836.53 crore in the previous trading session.

The turnover was below mostly Tk 100 crore in June.

The monthly inflow of remittance reached $2.60 billion in July, hitting an all-time high.

The country’s exports in July earned $3.91 billion, the highest-ever earnings in a single month in the country’s history.

The BB unveiled the monetary policy for the fiscal year 2020-2021 on July 29 that reduced bank rate and repo rate to 4 per cent and 4.75 per cent respectively.

‘Sidelined investors returned after observing positive movements on the market, which restored a bullish trend on the market.’

Investors kept on taking fresh positions amid vibrant ambiance from the very beginning of extended 30 minutes trading time effective from Sunday, it said.

The average share prices of telecommunication increased by 6.5 per cent, energy 4.8 per cent, pharmaceuticals 4.6 per cent and bank 4.4 per cent.

Square Pharmaceuticals led the turnover chart with its shares worth Tk 44 crore changing hands on the day.