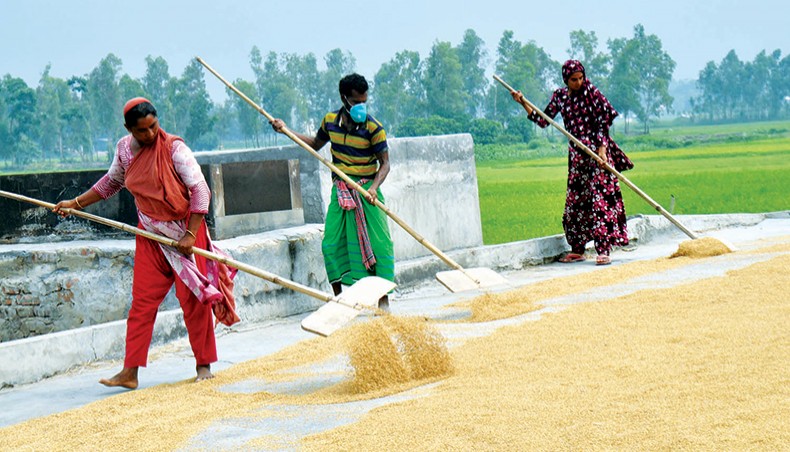 A file photo shows workers spreading paddy on a floor for sun drying at a rice mill at Sreenagar in Munshiganj. The government has set Tk 7,810 as the minimum monthly wage for the workers of country’s rice mill sector, increasing it by 41 per cent from the previous Tk 5,520. — Focusbangla photo

The government has set Tk 7,810 as the minimum monthly wage for the workers of country’s rice mill sector, increasing it by 41 per cent from the previous Tk 5,520.

The minimum wage for the workers of rice mill sector was last set in the year of 2012.

Economists said that the real income of the rice mill workers would decrease with the new minimum wage structure as the rate of wage hike was lower than inflation.

‘If we consider yearly inflation at the rate of 6 per cent, the wage should be increased by at least 50 per cent in the last eight years but it was raised by 41 per cent,’ Abdul Bayes, a former professor of economics at Jahangirnagar University, told New Age on Sunday.

Although the workers’ income would increase nominally with the new wage structure, the rice mill workers remain deprived of their due wages, he said.

But the owners on many occasions gained excessive profits through market manipulation, Bayes said.

The government in March last year took a move to review the minimum wages for workers of the rice mill sector by appointing owners’ and workers’ representatives to the minimum wage board.

After a long negotiation, the labour ministry on July 27 issued a gazette notification announcing Tk 7,810 as the minimum monthly wage for the sector workers with a provision of 5 per cent yearly increment.

The minimum wage for the grade-4 workers who reside in the divisional cities would be Tk 8,275 as they would get Tk 2,325 (50 per cent of basic pay) as house rent.

For the grade-3 (semi-skilled workers), the wage has been set at Tk 10,090 as monthly gross pay for workers in the divisional cities and Tk 9,504 for the workers in other areas.

For the grade-1 (advanced skilled workers), the ministry set Tk 13,975 as the minimum monthly wage for the divisional cities and Tk 13,130 for other areas.

It also set the wages for apprentice at Tk 5,000, mentioning that the period of apprenticeship would be three months. As per the labour act, the minimum wages for a sector have to be reviewed every five years.

‘The wages of agriculture sector workers including rice mill workers should not be calculated based on the cost and return, rather it should be assessed based on social cost-benefit,’ Bayes said.

The workers deserve incentives more than the inflation rate as their cost of living has increased due to the coronavirus pandemic, he said.

Bayes said that the COVID-19 proved that not the so-called role-model of development but the agricultural production was the key strength of the country’s economy and the government should fulfil the needs of the workers in this sector.

Sector people said that there were some 17,000 registered rice mills across the country. Of them, the number of auto mills was 550. They said that more than 8 lakh workers including 2.5 lakh women worked in the sector.