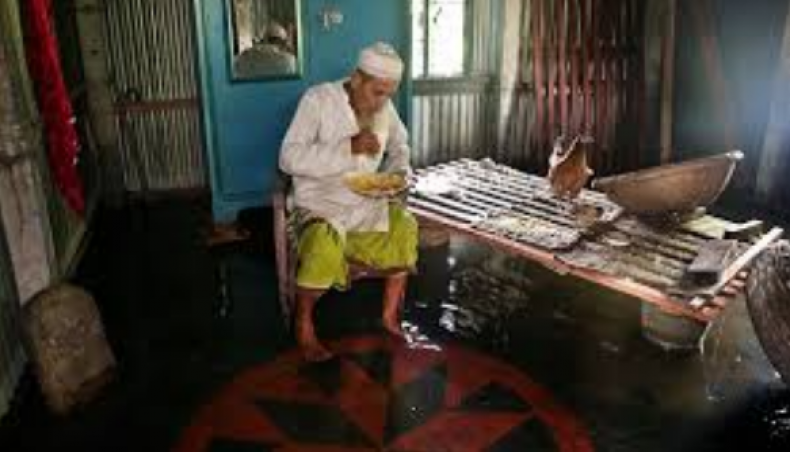 A man takes meal in an inundated house at North Baherchar of Keraniganj near the capital on Saturday while the flood situation witnessed a gradual improvement in different parts of the country. — Sony Ramany

All major rivers in the country that flowed above their danger levels for nearly a month and a half showed signs of receding in the last 24 hours until 9:00am on Saturday.

This is the first time in 43 days since the flood had begun that all the rivers receded together with flood forecasters saying that the country’s worst flood in decades is finally coming to an end.

‘We expect all rivers to fall below their danger marks by Tuesday,’ said Arifuzzaman Bhuiyan, executive engineer, Flood Forecasting and Warning Centre.

He said that all northern region rivers were already flowing below their danger levels and only rivers in the central region were still flowing above their danger marks.

Arif said that there is the possibility of another spell of flood at the end of the month but it would not be as bad as the ongoing one.

Flood Forecasting and Warning Centre estimated that the flooding took exactly a month to reach its peak on July 26 when 40 per cent of Bangladesh was under water.

This is the third time any floods engulfed 40 per cent of Bangladesh since the great flooding of 1998 that inundated 68 per cent of the country.

The number of deaths due to flood related causes however was very high according to health emergency control room. It said that the 174 people died because of the flooding since June 30.

With another spell of flood around the corner thousands of people at hundreds of flood shelters across the affected areas were undecided whether or not they should return home.

They said that the journey back home would not be easy with roads badly damaged by ceaseless flooding of rivers that flowed with massive force sweeping away thousands of homes.

The FFWC said that it would issue a report on the latest flood situation in a day or two.

New Age correspondent in Lalmonirhat reported that 176 houses were devoured by the receding rivers in eight districts of Rangpur division between Friday and Saturday.

The overall flood situation in the division improved much in the last two days with many shoals surfacing from under the water.

A FFWC bulletin on Saturday said that the Brahmaputra and the Jamuna were receding and might continue to recede until Tuesday.

The River Padma might continue receding until Monday, said the FFWC bulletin.

The rivers around Dhaka were also receding and might continue to recede until Monday.

According to the FFWC, a dozen rivers flowed above their danger marks at 16 points until Saturday, after most of them fell by 10cm between Friday and Saturday mornings.

Still five of the rivers flowed close to half a metre above their danger marks.

He said if the water continued to recede the way it did over the last two days, the flooding would be over by next week.

Although hundreds of people in low-lying areas in Dhaka city corporations remained stranded in floodwaters for more than two weeks they received no relief from the authorities.

‘The help will arrive any minute. We are waiting,’ said Akbar Hossain, councillor, ward No 75, Dhaka South City Corporation.

Floodwaters in Dhaka city corporations would continue to recede through Sunday, said the FFWC.

New Age correspondent in Tangail reported that large parts of 11 of the 12 upazilas in the district were still inundated by floodwaters though the Dhalswari and Jamuna receded significantly.

Over 6 lakh people remained still stranded in the affected areas in Tangail.

Food and drinking water shortages are acute among the flood-hit areas for the government met very little of the demands through its relief efforts.

A disaster management and relief ministry press release said on Saturday that the government allocated 16,510 tonnes of rice for the affected people of which 11,336 tonnes were distributed.

The press release said that the government also distributed 1.31 lakh dry food packets and Tk 2.74 crore in cash among the flood-affected people as well.