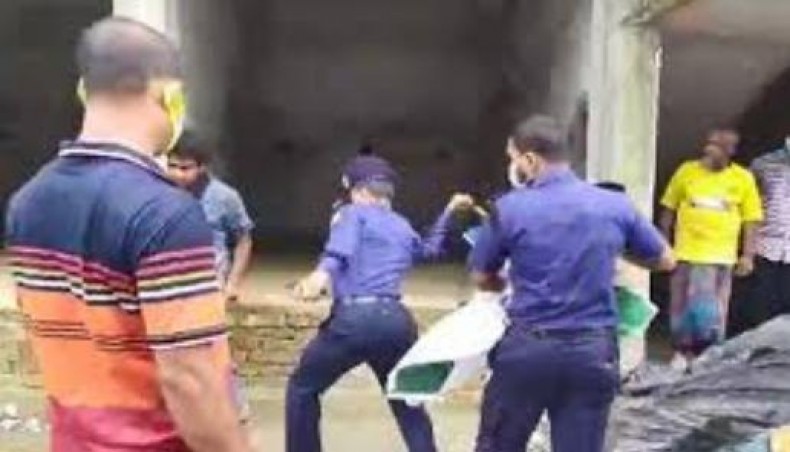 Students of different colleges, mostly classmates of Sifat in Bamna where he passed his childhood in his maternal grandfather’s house, began the human chain on Bamna College Road in the upazila town around noon.

Immediately after beginning the human chain, a team of police of Bamna police station arrived at the scene and snatched away the banner and handwritten posters demanding Sifat’s release and asked the participants to leave the spot, witnesses said.

Within moments, Bamna police station officer-in-charge Md Ilias Hossain Talukder arrived at the scene and began to hurl abusive words, and it was on his order that police began to charge baton which left at least five of them injured, said participants.

They also alleged that police swooped on their peaceful protest and foiled it.

They said that Sifat was innocent and that he was never an addict.

OC Ilias told New Age that police, on information from the locals that a group of people had blocked the road and hampered traffic movement, went to the spot and dispersed the demonstrators as they had no permission from the police to hold demonstration at the venue on the day.

‘There might be an ill-motive behind the demonstration on the day when there is government programmes to celebrate the birth anniversary of Bangamata Sheikh Fazilatunnesa Mujib,’ he said and claimed that they did not charge baton there.

The OC said that the programme was organised on the order of of Sifat’s maternal grandfather and opposition Bangladesh Nationalist Party’s Bamna thana general Secretary Enayet Ali Hawlader and his cousin who is a leader of Jatiyatabadi Chhatra Dal.

Enayet Ali Hawlader said that neither he nor his grandsons called for the protest programme. ‘The programme was planned and staged by Sifat’s classmates and friends in Bamna.’

He said that they filed application to the court of Cox’s Bazar praying Sifat’s release and that if the appeal was not allowed, they would move to the High Court seeking his release.

Stamford University Student Sifat and Shipra Rani Debnath were arrested by the police at the night when ex-major Sinha was shot dead by the police at Shamlapur police checkpoint on Cox’s Bazar-Teknaf Marine Drive.

The two students are now in jail in two cases — one related to the possession of drug and the other obstruction of justice — lodged by the police.

Meanwhile, a group of students of Stamford University, under the banner of the university’s Film and Media Studies department and Stamford Film Student Cine Forum, formed a human chain in front of the university’s Siddheshwari campus in the capital in the morning demanding immediate release of Sifat and Shipra, relieving them of the charges, justice in the killing of Sinha and social security for the families of the two students.