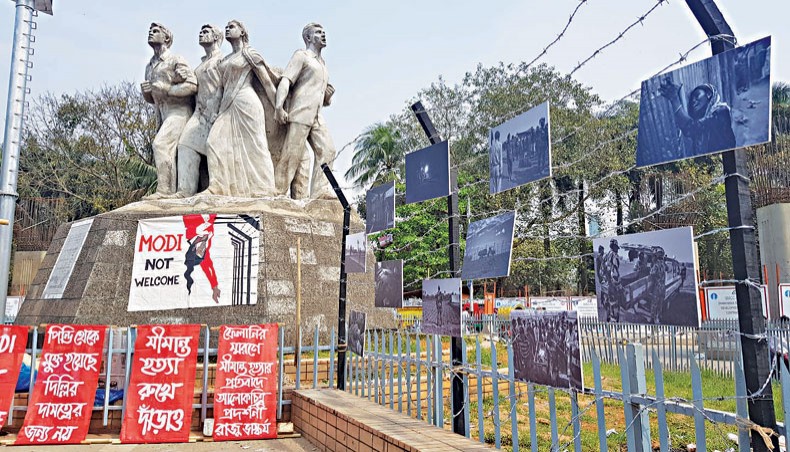 Photos of border killing incidents and a drawing of Felani’s body, hanging from the Indian border fence after being shot dead by BSF, are in display in a photo exhibition by Parvez Ahmed Rony at the Dhaka University campus on March 6 in support of the then ongoing sit-in protest by Nasir Abdullah there against border killings. — New Age photo

Media reports show that India’s Border Security Force killed at least 17 Bangladeshis in the border areas from January till June 16 this year. Nasir Uz Zaman writes about the border killings

THE sharp rise in numbers of border killings of Bangladeshi citizens by the India’s Border Security Force is undoubtedly a matter of great concern as the lives of ordinary people matter. Such killings matter as it also raises questions against the independent status and sovereignty of the country.

Media reports that BSF shoot a Bangladeshi civilian on June 24 in Lalmonirhat border area. On June 25, the wounded cattle trader died in Patgram Upazila Health Complex after a day the Indian guards opened fire on a group of people. Such killings are not something new and there are hardly any months when such killings are not happening.

Though the statistics is shocking and worrying but more worrying is the absence of effective measures to stop the border killings from the authorities or the governments of the both countries — Bangladesh and India.

There are some complexities regarding the border issues. Odhikar’s, a human rights non-governmental organisation, documents say that Bangladesh and India share a border of 2,429 miles. The Bangladeshi geographical divisions of Dhaka, Khulna, Rajshahi, Rangpur, Sylhet and Chattogram, along with Indian states of West Bengal, Assam, Meghalaya, Tripura and Mizoram share the border. India has constructed the Indo-Bangladeshi barrier, a 2,116-mile fence of barbed wire, to prevent trespass and the smuggling.

The documents also mark that human rights violations by the BSF have been going on for a long time along these borders. Instances of the BSF shootings, killings, torture and abduction of unarmed Bangladeshi civilians in the border areas violate international norms and treaties. Members of the BSF also illegally enter Bangladeshi territory and attack, shoot and kidnap Bangladeshis. India-Bangladesh border is probably the most vulnerable and bloodiest border in the world, says the Odhikar’s report.

Let us mark some points from the reports. The first one is the ‘border’. Actually where is the border and how the two countries decide the border line? Debdatta Chowdhury in his book Identity and Experience at the India-Bangladesh Border describes that West Bengal and Bangladesh share 200 kilometres of a riverine border and the borderline, running along the river, is an imaginary line. But the people around the areas, particularly the fisherman, are always in fear of being shot by the BSF and such shootings are not uncommon.

The second one is ‘sharing the border’. The two countries are not only sharing the border there but also the populations on both sides are sharing cultural, linguistic, religious, economic, and, particularly, kinship ties. Many people seek to cross the border in order to visit their relatives. Many of the border areas are densely populated, occupied primarily by farmers and landless peasants. For their life and livelihood, many people also cross the border. When border killing is discussed, most of the time, these complex realities are kept aside and the issue of smuggling becomes the major topic.

It is true that a fair share of the population of the border area are involved in smuggling or cattle-rustling for their livelihood. But what effective measures have been taken by the authorities to bring some practical changes in their livelihood is also a question that is needed to address.

The most important point to address here is the national or international laws if such trespass or smuggling or cattle-rustling happens. Section 46 of India’s Code of Criminal Procedure says that it is allowed to use ‘all means necessary’ when a person attempts forcibly to resist arrest, but it also clearly forbids causing the death of a person who is not accused of an offence punishable by death or a life term. To mark here, cattle-rustling which is among the much-talked crimes in border areas, is not such an offense.

The United Nations Basic Principles on the Use of Force and Firearms by Law Enforcement Officials also emphasised on not using lethal weapons and calls upon officials to apply non-violent means before resorting to the use of force and firearms. Even in self-defence, intentional lethal use of firearms is permitted only when strictly unavoidable in order to protect life.

Moreover, according to the Memorandum of Understanding and related treaties signed between the two countries, if citizens of the two countries illegally cross the border, it would be considered trespass and as per law those persons should be handed over to the civilian authority. Over the years, at many directorate general level meetings, India has agreed to use the non-lethal weapons to pacify the violators. However, India continues to use lethal forces, it is also expressively violent in its treatment of unarmed citizens and also the violations of the signed treaties.

On February 2, we have seen that the foreign minister AK Abdul Momen expressed his concern over the recent border killings. But only affirming the border killing issue is not anyhow enough to stop the border killings. The authorities needs to come up with more inclusive solutions. Moreover, on January 25, the food minister Sadhan Chandra Majumder said, as media reported, that the government would not take the responsibility if anyone was shot to death along the border while bringing cattle from India. Such speech from a parliamentary member matters as it contributes to legitimise the violent acts of BSF towards Bangladeshi citizens. It also matters as it expresses political unwillingness of the authority to resolve the border killing issue.

Besides the government’s will, a strong role of the Border Guard Bangladesh is also need to resolve the border killing issue. The increase in border killing of Bangladeshi citizens by BSF obviously raises questions about the BGB’s efficiency. Their duty is not only to stop illegal trespass and activities but also to protect Bangladeshi citizens. When law enforcement officials of other country kill another country’s citizens in border areas violating the laws, it becomes a clear threat to independence and sovereignty of the country.

One more thing to add, if we can realise that the lives of ordinary people in border areas matter but the authorities are quite silent on such killings, mass people from every sector should step forward to break the silence of the authorities to stop border killings. For example, students who are the future generation of the country, should try to understand the politics behind the border killings and should protest against the killings.

Nasir Abdullah, a student of University of Dhaka, continued a 55-day-long sit-in protest from January 25 at Raju memorial sculpture on the university campus demanding an immediate implementation of zero-border-killing policy and investigations of all previous cases of border killing.

Another example to share, Parvez Ahmed Roni, a young photographer, who took photographs for a long time of the border killing victims, arranged an exhibition of his photographs on March 6 at Dhaka University campus which was also a form of protest against border killings. Actually, more protests from different sectors will contribute to break the silence of the authorities on border killings and it is also the demand and need of the time — a collective protest.