The generals, the Buddhists and the Rohingyas 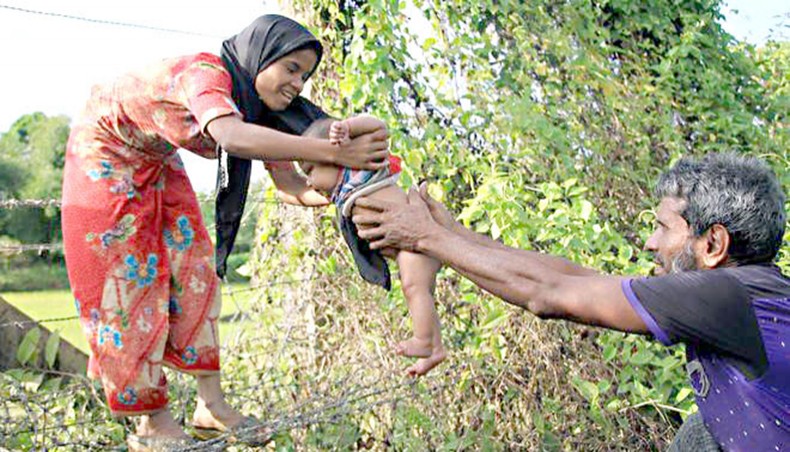 Protests against the February 1 military coup, which ousted Aun San Suu Kyi, continue in Myanmar despite an increasingly brutal crackdown. At the same time there are signs that widespread public resentment against the country’s Muslim Rohingya minority may be softening, writes Dominik Muller

‘YOU messed with the wrong generation’ is one of the popular slogans chanted by many of the young people who have been demonstrating in Myanmar for weeks. ‘My ex is bad, but military is worse’ or ‘I don’t want dictatorship, I just want boyfriend’ are just a few more of the phrases on signs held up by the young generation. After all, their protest also takes aim at a conservative social order represented by the generals and many Buddhist monks.

An increasing number of city dwellers from poor neighbourhoods and members of ethnic minorities are taking part in the student rallies. Civil servants and office workers have also joined ‘generation Z’ and their ‘civil disobedience movement’, many of them even walking out of their jobs to do so. The climax to date was the general strike on February 22, joined by hundreds of thousands of people despite threats of violence from the military.

Generation Z describes those young people born around the turn of the century who have been influenced by their nation’s cautious opening in recent years. Officially, the armed forces only relinquished political power to the civilian population in 2015 after oppressing the country for decades.

Since then, under the leadership of the Nobel Peace Prize laureate Aung San Suu Kyi, the National League for Democracy has attempted to gradually reduce the influence of the military.

The party managed to slightly ease censorship of the media and freedom of speech and there were free elections, but to this day the generals still control large sections of the economy and judiciary. And the constitution still in force is that of 2008, which guarantees the military a quarter of seats in both chambers of parliament and three key ministerial portfolios regardless of election results: defence, home affairs and border controls.

However, elections in November last year ended in a debacle for the pro-military USDP party: the NLP won 80 per cent of seats in the parliamentary poll. Ahead of the planned opening of parliament in February, the military launched its coup and detained Aung San Suu Kyi.

The situation facing the Rohingyas

THE NLD government did nothing to improve the situation of the 1.5 million Muslim Rohingyas in the west of the country. Myanmar regards the Rohingyas as ‘Bengali refugees’; in many circles even uttering the word Rohingya is deemed offensive.

When the military used brutal means to drive 740,000 Rohingyas into Bangladesh in 2017, led by the current head of the junta Min Aung Hlaing, the Nobel peace laureate remained silent. In an interview with the BBC, she justified the 2013 pogrom-like attacks by Buddhist nationalists on the Muslim minority and denied genocide against the Rohingyas.

Many Bamars — Myanmar’s majority ethnic group — view the current crisis as a conflict between the generals and Aung San Suu Kyi. But with the young generation, raised on the smartphone and the internet, we could see more than just a return to the division of power between the NLD and the military.

These young people have international connections, with many of them seeking inspiration from mass student protests in Hong Kong and Thailand. The role played by social media cannot be underestimated: to date, the internet and first and foremost Facebook, a synonym for the web in Myanmar, have served as a key resonance space for generation Z, a space that they also use for mobilisation.

This is the view of the German daily taz, which has since 2013 invited a total of 45 journalists from Myanmar to attend workshops in Berlin and has access to numerous sources in Myanmar. When the military tried to block access first to Facebook and then the entire web just a few days after the coup, this did more to mobilise the young than anything else. For many, a life without Facebook is inconceivable.

On the other hand, social media have also served as a key propaganda instrument for Buddhist nationalists using Facebook to spread their Islamophobic propaganda — for example, furnishing the Islamophobic film ‘Fitna’ with Burmese subtitles. ‘Fitna’ proved to be extremely popular with young people.

Someone who also claims to be a big fan of Geert Wilders and his film is the Buddhist monk Ashin Wirathu, described by Time Magazine in 2013 as the ‘face of Buddhist terror’. He was the driving force behind the anti-Muslim pogroms of 2013. Wirathu is just the tip of the iceberg — many Buddhist monks in Myanmar regard Islam as a huge threat to the nation, despite the fact that Muslims make up less than five per cent of the population.

Not all of the country’s half a million monks are as radical as Wirathu and call for violence against the minority. But many weave history into their arguments and preach that nations like Afghanistan or Indonesia used to be Buddhist and that Myanmar is facing the same threat of ‘Islamisation’ if no action is taken to halt the process. The military junta released Ashin Wirathu from prison in mid-February as part of a mass amnesty.

‘THE Buddhist monks influence the people here, no leading politician can afford to have them as their enemy,’ says 69-year-old Khin Zaw Win. The political analyst lives with his family in Bauktaw, a suburb of Yangon. This is the place where a few years ago, the radical 969 Movement led by Wirathu was still calling for a boycott of Muslim shops and businesses.

‘Unfortunately, I’m one of the few Buddhists in Myanmar to vocally oppose the extremists. That’s very frustrating,’ says Win. His own life has been dramatic: In the 1980s, he joined the pro-democracy movement and sent reports to international human rights organisations during the military dictatorship. For that, he spent 11 years in prison.

The current demonstrations give him a sense of hope. ‘All religious confessions have joined hands for the purpose of the protests, old walls of marginalisation are collapsing,’ says Win. At the demos, an increasing number of placards can be seen apologising for years of violence against the Rohingyas and accusing the military of genocide.

In social media too, the number of voices showing solidarity with the Rohingyas is growing. At the latest since the 33rd light infantry division shot dead two demonstrators in Mandalay, Myanmar’s second-largest city, on February 20. The unit is one of two divisions distinguishing itself through atrocities, killing and the burning down of villages in the 2017 offensive against the Rohingyas.

Although this solidarity with the Rohingyas is not yet a mass phenomenon, it provides a pinprick of hope. For the Rohingyas too, forced to live in refugee camps in Bangladesh. Many send pictures with the three-finger salute, the symbol of the movement. In Yangon, smaller groups of Rohingyas are even openly participating in the rallies against the generals and welcomed with open arms by other demonstrators.

Khin Zaw Win and many of his fellow campaigners from ‘Generation 88’, those who protested against the military junta in the 1980s and 1990s, have also thrown their weight behind the contemporary movement. Employees, primarily from the health and education sectors, have downed tools, as well as personnel from state media, the public energy company and the nation’s transport service.

The large-scale participation of civil servants and state officials who would have previously kowtowed to the generals is remarkable. The military leaders did not expect entire workforces of authorities, institutes, public utilities and hospitals to protest against the putsch.

Even more unexpected for coup leaders and therefore particularly celebrated by the protest movement are police offers who suddenly give the three-finger salute or as in the city of Pathein, clear their barricades away to allow the demonstrators to pass. On February 4, a 40-member police unit in Loikaw, a town on the border with Thailand, changed sides. ‘That didn’t happen before,’ says Khin Zaw Win.

This is a period of great upheaval in Myanmar. Whether Aung San Su Kyi will emerge from the conflict as the winner or the loser is uncertain. Although she is again in the role of the ‘underdog’ and this feeds her popularity, says Khin Zaw Win, ‘despite her successes in the past, she has regularly left the country and its people in the lurch.’ A new perspective could potentially arise beyond the NLD and the military. The young generation appears to hold the key.