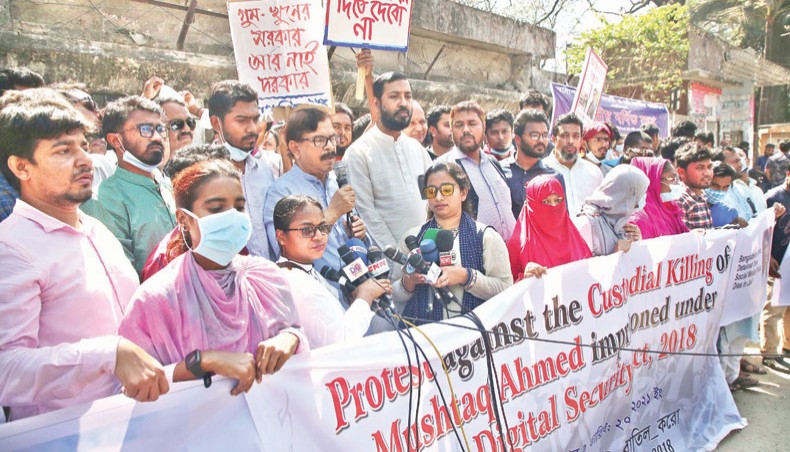 Nagorik Oikya convener Mahmudur Rahman Manna addresses a rally in front of the National Press Club in Dhaka on Saturday organised to protest against the custodial death of writer Mushtaq Ahmed and to demand the scrapping of the Digital Security Act. — New Age photo

Protests against the death of writer Mushtaq Ahmed in jail and the demand for the scrapping of the controversial Digital Security Act spread to districts on Saturday as the protestors faced police obstructions, cases and arrests in Dhaka and Khulna.

Despite assaults and arrests by the police, the voice of the protesters is getting louder and they have announced fresh programmes, including besieging the home ministry and marching towards the Prime Minister’s Office, for the scrapping of the act.

A court in Dhaka sent to jail custody the seven activists of left-leaning student organisations on Saturday,  a day after they were picked up by the police from the capital’s Shahbagh from a procession that was protesting the death of Mushtaq in jail, court officials said.

The police produced them before the court.

The court allowed the police to interrogate them at the jail gate, court officials further said.

with the capital’s Ramna police station died at the Kashimpur High Security Jail on February 25 evening.

He was refused bail six times during his detention for over nine months.

In Khulna, police arrested Sramik-Krishak-Chhatra-Janata Oikya Parishad convenor Ruhul Amin under a DSA case for his Facebook posts over Mushtaq’s death in jail.

Mushtaq collapsed in a washroom of the prison on Thursday evening and was taken to Shaheed Tajuddin Medical College and Hospital where he was declared dead, DC Tariqul told reporters.

The home ministry constituted a five-member body, led by additional secretary Tarun Kanti Sikder, to investigative whether the jail authorities had any negligence with respect to the death.

The committee will have to submit its report in four days, stated a notice of the ministry on Saturday.

Writer Mushtaq’s death is the first death in prison following detention under the Digital Security Act.

The police submitted a charge sheet to a Dhaka court against him, cartoonist Ahmed Kishore and Rashtrachinta Dhaka coordinator Didarul Bhuiyan in a case under the act.

Mushtaq and three others were arrested on May 6, 2020 in the case on

charges of tarnishing the image of the country’s founding president Sheikh Mujibur Rahman, hurting the spirit of the liberation war and spreading rumours about the government response to COVID-19 and about the army and other security forces on the social media.

He was later shifted to the high security prison from the Dhaka Central Jail on August 24, 2020.

The death sparked instant protests that are spreading, with more and more political parties, rights organisations, civil society groups and student groups voicing the demand for abolishing the act.

A number of organisations, including Chhatra Union, Chhatra Front and Chhatra Federation, staged a protest rally at the Shahbagh crossing on Saturday afternoon demanding release of the students arrested from an earlier torch procession and withdrawal of the ‘fabricated case’ against them.

Chhatra Federation earlier held a rally at the foot of the Raju memorial sculpture near the TSC on the Dhaka University campus and then they moved to the Shahbagh crossing where its members joined the other left-leaning organisations.

The left-leaning organisations announced that they would besiege the home ministry on March 1, said Chhatra Front leader Rashed Shahriar.

The leaders of the Democratic Left Alliance at a rally in front of the National Press Club in the capital demanded a judicial enquiry to ascertain the cause of Mushtaq’s death in jail custody.

Communist Party of Bangladesh presidium member and LDA coordinator Abdullah Kafee Ratan said that the death of Mushtaq in jail custody was unacceptable.

He demanded immediate annulment of the Digital Security Act.

Chattra Odhikar Parishad held a protest rally in front of the National Press Club in the afternoon, where they termed Mushtaq’s death a murder, demanded a proper investigation into it, the scrapping of the DSA and protested the police assaults on demonstrators.

Addressing the programme, Nagorik Oikya convener Mahmudur Rahman Manna said that the DSA was a repressive law and it must be scrapped as the government was using it to gag dissent and criticism.

The immediate past Dhaka University Central Students’ Union vice-president Nurul Haque Nur castigated the police attacks on protesting students saying that they would also give befitting responses if police assaulted them again.

The court rejected the remand plea and fixed March 3 for bail hearing.

The court also instructed the police to interrogate the arrested at the jail gate.

An official of the police station said that Ruhul was arrested under the DSA for creating instability in the state and society with his Facebook posts that contained inciting comments encouraging instability and derogatory remarks.

Later he was produced before Metropolitan Magistrate Sarwar Ahmed who allowed the police a two-day remand for interrogating him in their custody.

Sramik-Krishak-Chhatra-Janata Oikya Parishad staged demonstration in Khalishpur protesting against the arrest of Ruhul and demanded his immediate release and the scrapping of the Digital Security Act.

The Socialist Party of Bangladesh formed a human chain in Barishal city to protest the death in prison.

The Committee for the Protection of Fundamental Rights on Saturday condemned what it said the murder of Mushtaq in custody.

In a press statement, the rights group demanded an impartial investigation into the murder and immediate release of cartoonist Ahmed Kishore and the other arrested under the DSA.

‘Tarnishing image’ cannot be considered a crime in a democratic country, said the committee.

Left-leaning organisations staged demonstrations also in Chattogram, Sylhet, Moulvibazar and Narayanganj in protest against Mushtaq’s death and demanded the scrapping of the act.

The Transparency International Bangladesh in a release on Saturday demanded that accountability as regards to the death of Mushtaq must be ensured and the Digital Security Act should also be scrapped.