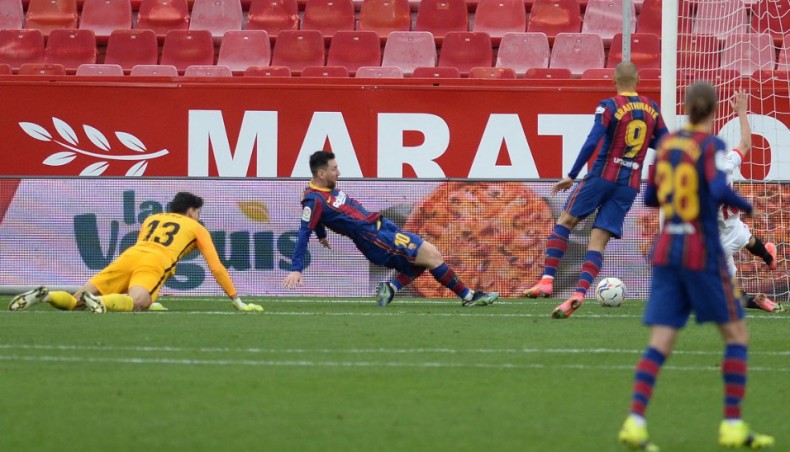 Barcelona reignited their title hopes after Lionel Messi and Ousmane Dembele scored in a 2-0 victory over Sevilla on Saturday to put them two points behind Atletico Madrid.

Atletico still have two games in hand, the first of those coming against sixth-placed Villarreal on Sunday, but a dip in form from La Liga's leaders has given their chasing rivals hope.

Barca looked dead and buried a few weeks ago but this was their ninth win out of 10 in La Liga, a surge that has put them back in contention, with Atletico playing against Real Madrid next weekend.

Sevilla started the day as arguably the form team at the top, having won all of their last six league games, the last five of those without conceding a goal.

But they were second best at the Ramon Sanchez Pizjuan, a dominant performance from Barcelona exposing them still as slightly short of Spain's top three.

It also creates an intriguing back-drop to Wednesday's Copa del Rey semi-final second leg when these two teams meet again, with Barca hoping to overturn a 2-0 deficit at Camp Nou.

Pedri and Ronald Araujo could be doubts after both were substituted in the second half with what looked like injury problems.

Coach Ronald Koeman could well stick with his new 3-5-2 system, which saw Jordi Alba and Sergino Dest playing as wing-backs ahead of a back three and Dembele deployed up front alongside Messi.

Without Antoine Griezmann, who dropped to the bench, Koeman sacrificed some creativity in the final third for control through the middle, not to mention the threat of Dembele in behind.

Certainly for the best part of an hour Sevilla struggled to escape Barcelona's press or establish any sustained pressure, even after Julen Lopetegui introduced three substitutes at half-time and switched formation to match their opponents.

Marc-Andre ter Stegen was passed fit to play by the team doctor despite hurting his right thumb in the warm-up and in truth it was hardly tested in the first half.

Barca controlled the game and while Alba and Dest never really advanced as much as Koeman might have liked, Frenkie de Jong and Pedri were a constant threat through the middle, with the speedy Dembele just in front.

Chances, though, were few and far between and it took a counter-attack for Barcelona to take the lead.

Fernando gave the ball away cheaply up front and two passes were enough, Messi curling the decisive one through for Dembele to race clear and finish.

Lopegtegui reacted with three changes at half-time and two more after the hour but even by matching Barcelona's system, Sevilla struggled to gain a foothold.

Alba came up just short of De Jong's cross, Dest slammed against the post and Messi blazed over after another surge from Dembele.

One of Lopetegui's substitutes Youssef En-Nesyri had Sevilla's best chance but headed over.

Yet without a second goal, a nervy finale was always likely and En-Nesyri found the corner on the turn but had the goal ruled out for a handball, his tussle with Araujo seeing Barca's defender go off and he booted some chairs over in frustration.

But Sevilla's push was brief, ended by Messi with six minutes left.

He traded passes with Dembele, nipped inside Diego Carlos and tried to finish with a chip. Bono saved but the ball came to Messi, one yard out.