The US war in Syria is far from over 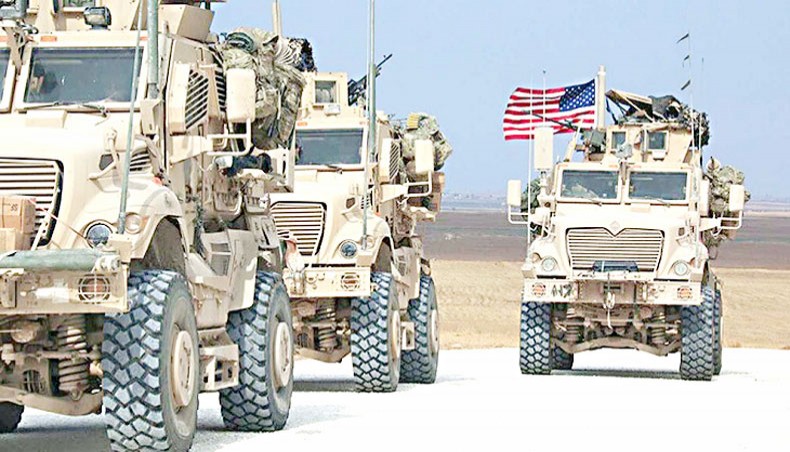 APART from the fact that the US sanctions regime is directly plundering Syria by keeping Syria’s oil resources under its control, the US is already moving to expand and entrench its military position in the country. This is happening despite the fact that the ISIS has already been defeated and the Syrian government is committed to rebuild and unify Syria and maintain its territorial integrity. The US occupation of northeast Syria, however, remains an impediment. The fact that the US is now planning to deepen its control of northern Syria speaks volumes about how the Biden administration is going beyond what even the Trump administration was doing. By expanding direct military presence, the US-led coalition is now looking to reify the existing territorial divisions and prevent Syria’s unification. This appears to be a consciously designed policy of sabotage whereby the US is looking to not only prevent Syria’s return to normalisation, but also prevent Iran and Russia from making Syria their major foothold in the Middle East.

As it stands, the present objectives of US presence in Syria are different from when it first entered the theatre to supposedly defeat the ISIS. While the ISIS has already been defeated — and the US role in that war was from anti-ISIS — the US remains focused on defeating Syria itself as well as its allies. A recent Pentagon report to the US Congress on Syria reflects the latest phase of US war in Syria. The report says that the biggest challenge to the US interests in Syria is Iran, Russia and the Syrian regime. The report says, ‘Obstacles to the US Government’s strategic goals include a repressive Syrian regime unwilling to negotiate to accommodate the aspirations of the Syrian people, the interference of malign actors — Russia, Iran, and violent extremist organisations — and limited influence with the Syrian regime.’

It further says that ‘Iranian-aligned militias still pose a high threat to US interests’ and that ‘Iran likely continues to develop plans for operations against US positions across the region, including in Syria.’ It further says that ‘Iran has attempted to recruit local Syrians to collect intelligence on US and Coalition forces in Syria, and could attempt to leverage these individuals to conduct attacks on its behalf.’

Accordingly, the primary purpose of US ‘stabilisation’ efforts is not to rebuild Syria, it is to use these efforts ‘as a ‘counterweight’ against the destabilising influence of Iran, Russia, and the Syrian regime in the area.’

The cardinal purpose of US policy in Syria, therefore, is not to defeat terrorism, it is to ensure that the Syrian government severs ‘its relationships with Iranian forces and Iranian-aligned militias.’ In other words, the Biden administration, like the Trump administration, is designing and implementing a Syria policy that will aim at, among other things, pushing Iran back and force it away from Syria, thus breaking its direct link with Hezbollah in Lebanon. It is equally aimed at pushing back Russia.

These efforts have already led to plans to establish a new US-military controlled military base in northeast Syria. The location of the base has been marked keeping in the mind a long-term US presence in Syria. The base would be located near the most important entry point into northeast Syria from the Kurdistan region of Iraq, which is where most of the ground lines of resupply and reinforcement for the US led coalition enter Syria.

The Syrian Observatory for Human Rights confirmed the arrival of the new convoy of the coalition, with more than 50 vehicles and trucks, to the Syrian territory last week. The military convoy, carrying armoured vehicles, logistical equipment, and weapons was reportedly seen crossing into north-eastern Syria from the Kurdistan Regional Government-ruled area of northern Iraq.

These developments fit the overall agenda of the new US administration, which is partly motivated by the failure of the Obama administration to achieve a quick victory in Syria in terms of sending Assad home.

Antony Blinken, the US secretary of state, has suggested that he feels a responsibility to do ‘better’ now. Some other administration leaders have suggested that they learned lessons from their previous experience and that they need to avoid past mistakes. The Joe Biden administration, by building new military bases and expanding the old, is indicating how it intends to correct its mistakes. In other words, while it cannot send Assad home now, it can still keep Syria divided and political unstable by keeping Kurdish militias strong.

As such, troop redeployment and the development of military bases are not isolated incidents. They fit into Joe Biden’s interventionist mindset. Indeed, Joe Biden was highly critical of Trump’s decision to withdraw US forces from Syria. And, unlike Trump, Biden has made no promises to end America’s ‘useless wars.’

The US, under the new administration, is therefore not going to withdraw from Syria. It is moving to consolidate its existing control of north and northeast Syria. As it stands, as the Pentagon report shows, such a consolidation is necessary in view of the ‘the presence of Iranian, Russian, and Syrian regime forces’ that present yet ‘another destabilising factor in northeast Syria’ that directly impede US ‘stabilisation efforts’, or defeat its interventionist designs.