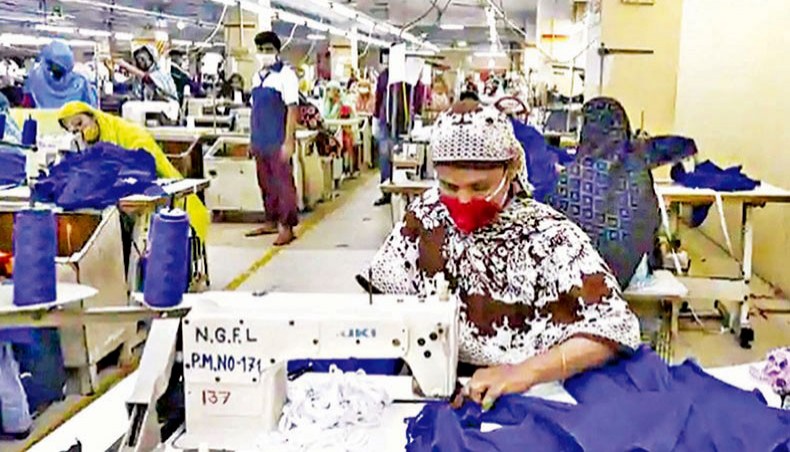 A file photo shows workers wearing facemasks sewing clothes in a garment factory in Dhaka in May. — AFP photo

The International Labour Organisation with the support of the Bangladesh government and other stakeholders is going to introduce an employment injury insurance scheme in the country’s readymade garment sector on a trial basis with the aim of developing social protection and national system for compensation of workers in line with the international standards.

The ILO in association with the Deutsche Gesellschaft für Internationale Zusammenarbeit (GIZ) proposed two trial phases — the strengthening of capacities for existing short-term benefits and services and the testing of a risk pooling approach amongst employers for long-term benefits.

ILO experts at an event held in Dhaka on Thursday said that the timeframe for the trial would be three to five years with an estimated cost of $7.40 million a year.

It also estimated the cost of the trial at 0.13 per cent of the wage bill, which would be less than $2 a worker.

The first trial phase would start in April.

The ILO proposed an innovative approach where the total costs would be shared amongst all relevant stakeholders, both at national and international level, Anne Marie La Rosa, operational manager of Global Programme on Employment Injury Insurance and Protection of the ILO, said in a presentation at the event.

She said that the institutional oversight of the trial would come under a tripartite EIS trial committee and a fund and an implementing agency would be required for the implementation of the trial.

The implementing agency will run the delivery of the benefits and services, with the required support of international partners and it will be responsible to deliver the long-term benefits to injured workers or the surviving family of a deceased worker, Rosa said.

She also said that under the trial, compensation for permanent disability and death would still be payable by the central fund or the group insurance under the existing legal framework while a top-up lifetime pension would then be payable by the trial’s fund to the beneficiaries to ensure that the value of all long-term employment injury benefits payable are equivalent to the actuarial value payable under ILO Convention 121.

The ILO experts said that the first phase of the trial would involve at least 1,50,000 workers covering 50-100 factories, reflecting current operating reality while the second phases (long-term benefits) would cover all workers in RMG exporting factories.

The ILO started negotiation with global retailers, factory owners and workers to cover the gap cost related to the long-term benefits (disability and death) as well as administrative costs of EII agency.

The government of Bangladesh signed a letter of intent, with the ILO and the Federal Ministry of Economic Cooperation and Development, Germany on October 6, 2015 with the aim of establishing a national employment injury insurance scheme.

The ILO, a UN organisation, also prepared a legal framework on the EII and proposed in 2017 that the Bangladesh government adding the issue to the compensation related chapter of the Bangladesh Labour Act.

According to the ILO data, among the top 20 apparel exporting countries in the world, the social protection level for the Bangladesh RMG workers is the lowest.