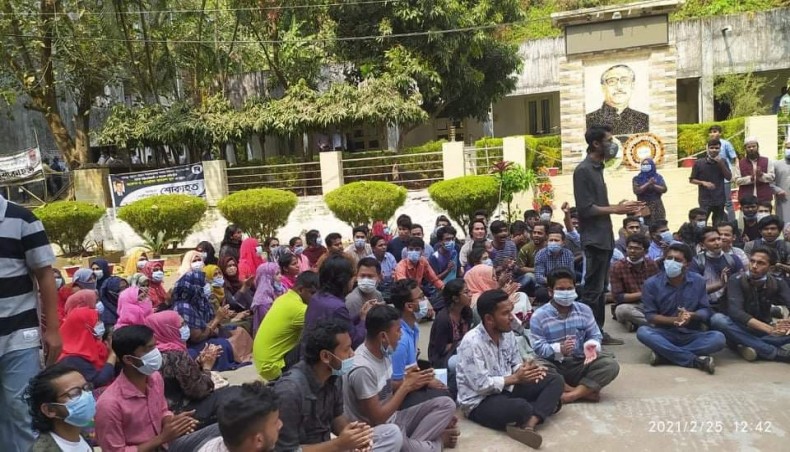 The students of Chittagong University on Thursday hold a demonstration on the campus demanding the withdrawal of a decision of postponing their exams.- New Age photo

The students of Chittagong University on Thursday held a demonstration demanding the withdrawal of a decision of postponing their exams.

The students started the demonstration at about 12:00 pm at the Shaheed Minar area of the university.

Later, the students came to Bangabandhu Square and took position for two hours. They handed over a memorandum to the university authorities.

The agitating students said that the university authorities postponed the exam again after announcing a date.

'Students have come from different parts of the country ahead of the exams. As the halls are not open, the students are preparing for the exams staying at the cottages around the university. The decision of postponement of the exams has increased the mental stress of the students,' they said.

Mohammad Nezam Uddin, a student of the English department, told New Age that they were demanding only the ongoing examinations to be taken.

'We are not demanding the opening of the halls. We just want to give the examinations,' he said.

Rabiul Hasan Bhuiyan, the proctor of the university, told reporters that the university authorities took an initiative to take the examinations. Examinations of several departments have also been held.

'Since the government has made a decision, the university authorities are implementing the decision,' the proctor said.

The government recently decided to open the halls on May and 17 and open the universities on May 24.