Nasir and Tamima defend their marriage 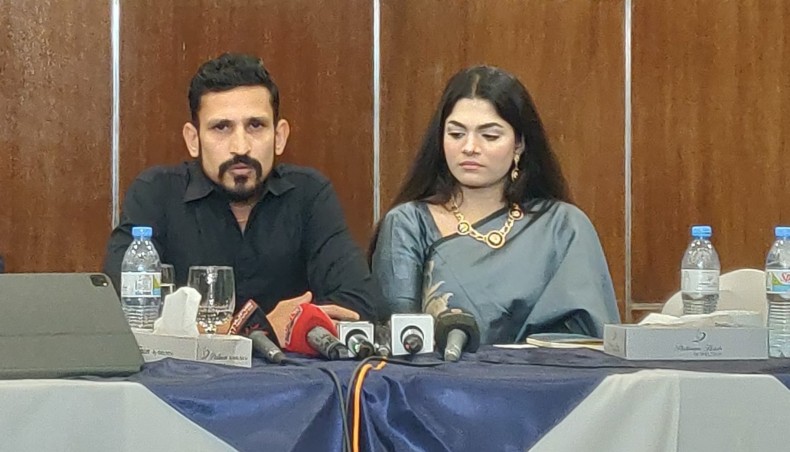 Cricketer Nasir Hossain and his wife Tamima Sultana speak during a press conference at a city hotel on Wednesday.— Courtesy photo

Cricketer Nasir Hossain and his newly-wed wife Tamima Sultana on Wednesday defended their marriage hours after Tamima’s ex-husband Rakib Hasan filed a case against the couple accusing them of adultery.

Rakib filed the case with Dhaka Metropolitan Magistrate Mohammad Jashim in which he accused Nasir of marrying Tamima without the latter formally divorcing him, said his lawyer Ishrat Jahan.

The court ordered the Police Bureau of investigation to investigate the charges and file a report on March 30.

Nasir and Tamima held a press conference at a city hotel, where their legal advisor was also present.

Tamima claimed that she was legally separated from Rakib before marrying Nasir.

‘What Rakib is telling in the media is a blatant lie. I started the process of separation with him in 2016 and the process ended in 2017. I have followed full legal procedures. He and his family members are well aware of that,’ Tamima told the press conference.

'His statements have only two truths. I married him and we have a child. Apart from that, every information is false', Tamima added.

Nasir told the media that he was well aware of the past of his wife.

‘I knew Tamima for more than four years. She was a good friend of mine. Then we fell in love and got married. We are mature enough to not make such mistakes,’ said Nasir.

‘I know that she was married before and she has a kid. We married knowing everything, taking all the legal steps', said Nasir.

He also said that he will be taking legal actions against those who spread demeaning words about his wife.

‘Now she is Tamima Hossain, I don't like anybody raising fingers towards my wife or saying something. I will take legal actions against them', Nasir told the reporters.

Nasir's lawyer also said that he would legally face the case.

Nasir posted several photos of his wedding on his verified Facebook page on the next date and sought blessings from all.

The wedding stroked a controversy after Rakib accused Tamima of marrying Nasir without formally divorcing him and filed a general diary with a police station in the capital.

Rakib also claimed that Tamima has an eight-year-old daughter with him. The daughter is now living with his parents, he told reporters.

In January, he played in a controversial T10 tournament in UAE.