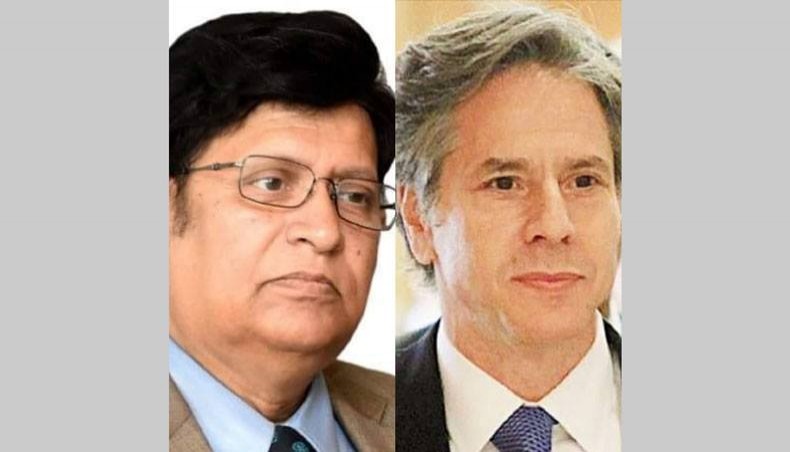 The US secretary of state Antony Blinken on Wednesday in a telephone conversation made an appeal to his Bangladeshi counterpart AK Abdul Momen in Washington DC to respect human rights and labour rights.

The two leaders also discussed the need for a durable solution to the Rohingya refugee crisis, according to Ned Price, a US state department spokesperson.

They also discussed ways to deepen cooperation in areas including economic, counterterrorism and defence, and work together to address common challenges such as climate change, said the US official in a statement.

The two ministers also expressed the desire for closer collaboration to address challenges in South Asia and the greater Indo-Pacific region.

At the beginning of the discussion, the US secretary of state expressed his regret over the fact that he could not meet foreign minister Momen in person due to the COVID-19 health restrictions, according to a press release issued by Bangladesh foreign ministry.

Both the countries agreed to work together on the promotion of democracy, good governance and human rights.

Blinken stated that the US considers Bangladesh a crucial economic and security partner in the Indo-Pacific region.

He sought favourable policy support from the Bangladesh government to secure enabling business and investment climate for promoting more trade and investment between the two countries.

On the Rohingya exodus from Rakhine, Momen emphasised that the US should take the lead and bring the international community together to put enough political pressure on Myanmar to create the condition for the sustainable return of the Rohingyas.

He encouraged the US government to take more stringent measures like imposing economic sanction on and withdrawing GSP facilities of Myanmar in addition to sanctions imposed on some individuals.

Momen underscored the need for early deportation of MA Rashed Chowdhury, a self-confessed killer of Bangladesh’s founding president Sheikh Mujibur Rahman, in the spirit of the shared values of establishing good governance, rule of law and justice.

Momen stated that Bangladesh wanted to elevate relations with the US from partnership to a strategic level through maintaining a close and sustained contact with the US leadership.

Momen is currently visiting Washington DC on an official trip to reach out to the new administration to further enhance the level of cooperation between Bangladesh and the United States, the foreign ministry said.

The foreign minister is set to join seminars on Bangladesh-US relations and Rohingya issues at the invitation of two US-based think tanks.

In a diplomatic note to the US government last week, Bangladesh requested for a meeting between the two foreign ministers.

Momen told journalists at his office in Dhaka on Monday that he wanted ‘a broad-based discussion’ in the meeting to enhance his understanding of the new US administration.

The foreign minister, who left Dhaka for Washington on early Tuesday for a five-day official visit, is likely to hold meetings with the United States Senate Committee on foreign relations, several senators, several US business people and academics, according to Bangladeshi diplomats in the US capital.