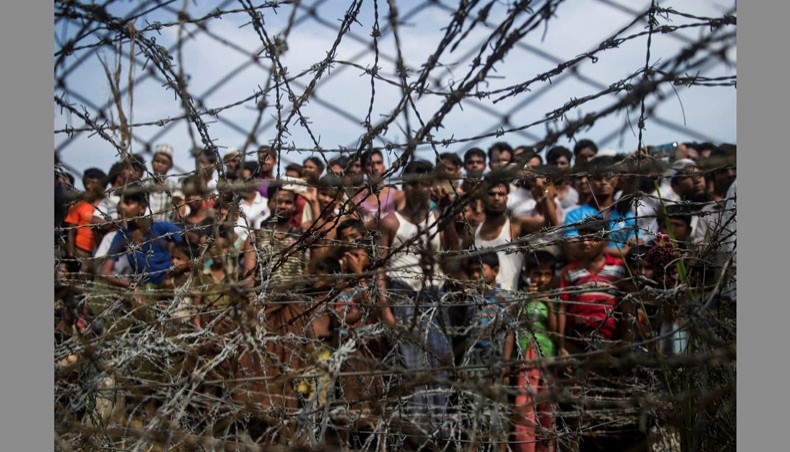 This file photo taken on April 25, 2018 shows Rohingya refugees gather behind a barbed-wire fence at a temporary settlement setup in a ‘no man's land’ border zone between Myanmar and Bangladesh, near Maungdaw district in Myanmar’s Rakhine state. — AFP Photo

A boat carrying dozens of Rohingya, including women and children, has broken down at sea and at least eight people have died, a rights group and the UN refugee agency said Monday.

The vessel is believed to have departed Bangladesh on February 11 with 90 people on board, including 65 women and girls, Chris Lewa, from the Arakan Project, said.

But it broke down after a few days, had run out of food and water and was now drifting in the Andaman Sea close to India’s Andaman and Nicobar Islands, said Lewa, whose group tracks Rohingya boat sailings.

Six women and two men are believed to have died so far, mostly from dehydration, said Lewa, whose group has been in touch with the migrants on board. The United Nations refugee agency confirmed that some had lost their lives.

Indian maritime authorities arrived in the area recently and are believed to have given the migrants supplies, said Lewa.

The refugee agency called for ‘immediate action.... to save lives and prevent further tragedy.

‘We appeal to all governments to deploy their search and rescue capacities and promptly disembark those in distress.’

Rohingya are originally from mostly Buddhist Myanmar but about 7,50,000 fled over the border to Bangladesh following a 2017 military crackdown, and now live in the world’s biggest refugee camps.

Many have made the sea crossing to Malaysia, which is home to a large Rohingya community and where they can find work in low-paying jobs such as construction.

But the journeys are often long and harrowing, with migrants facing abuse and beatings by traffickers, and many die en route.

It has also become more difficult for them to reach Malaysia in the past year as authorities stepped up patrols of the country’s maritime border due to the coronavirus pandemic.