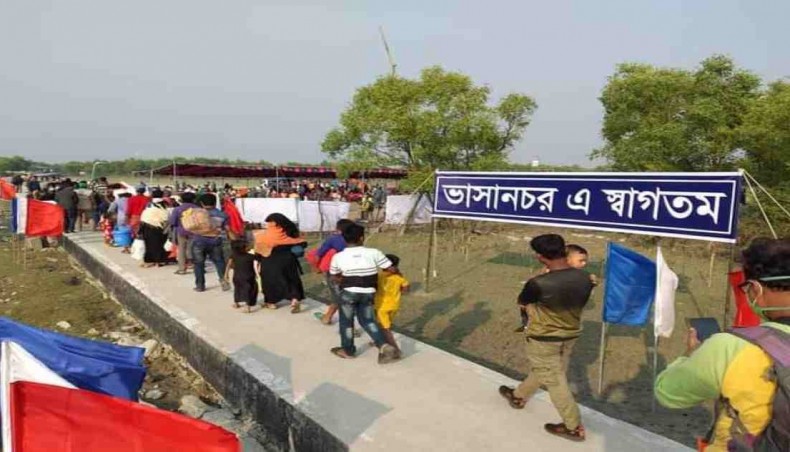 A UNB file photo shows that some Rohingya people are being relocated to Bhasan Char.

Around 3,000 Rohingyas have agreed to relocate to Bhasan Char from the camps in Ukhiya and Teknaf in Cox’s Bazar.

Sources familiar with the matter say that the third phase relocation will begin on Thursday.

The Rohingyas have been brought to Ghumdum transit camp. Fifty vehicles have been kept ready to transport the forcibly displaced Myanmar nationals to Chattogram. They will be taken to the river island from there.

In the first two phases, 3,446 Rohingyas were relocated to the river island.

Bangladesh, one of the most densely-populated countries in the world, is currently hosting more than 1.1 million Rohingyas. The majority of them came here since August 2017 fleeing persecution in their homeland, Rakhine state of Myanmar.

Bangladesh has been urging the global community to take effective steps to put pressure on Myanmar to create a congenial atmosphere for repatriation but there has been little progress.

The presence of the huge number of Rohingyas in the coastal district has put them on a collision course with the locals. Many Rohingyas have gotten involved in different criminal activities.

Foreign minister AK Momen has said that the Rohingya population would pose a serious security threat to the entire region if they were not sent back to their homeland as soon as possible.

The government spent millions of dollars to develop the river island of Bhasan Char and plans to relocate 100,000 Rohingyas there in phases in the face of growing concerns over the extreme congestion in Cox’s Bazar camps and to avert any risk of death due to landslides and other unwarranted incidents.

The Rohingyas are one of the most persecuted minorities in the world.

Members of the mainly-Muslim majority ethnic minority is denied citizenship by Myanmar and many are forced to live in squalid camps in apartheid-like condition.

State-sponsored discrimination against the Rohingyas stretches back decades.

Located 34 kilometers from the mainland, the island surfaced 20 years ago and was never inhabited.

Contractors say its infrastructure is like a modern township, with multifamily concrete homes, schools, playgrounds and roads. It also has solar-power facilities, a water supply system and cyclone shelters.

The island has all modern amenities and recently a police station was set up there.