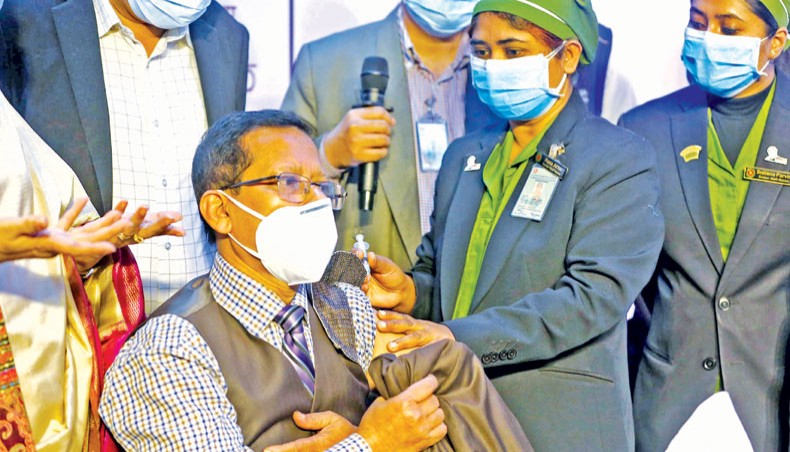 A health worker administers coronavirus vaccine on a person at Kurmitola General Hospital in Dhaka on the first day of vaccination programme on Wednesday. — Sourav Lasker

Runu Veronica Costa, a nurse of Kurmitola General Hospital, received the first vaccine in Bangladesh as the country began the vaccination drive against COVID-19 on Wednesday.

Prime minister Sheikh Hasina inaugurated the vaccination drive connecting virtually from her official residence Ganabhaban with the vaccination event at the hospital in the city at about 4:05pm.

‘I am glad that we have succeeded in getting the vaccines and I hope we could protect our people from COVID-19 through vaccination,’ said Hasina as she officially inaugurated the vaccination.

She also expressed her condolences at the loss of lives due to COVID-19.

When she was being administered the vaccine, the prime minister asked Runu whether she was afraid of taking the jab, she replied in the negative. ‘You are so courageous to have agreed to become the first person to receive the vaccine,’ prime minister lauded her.

Twenty-six frontline fighters including healthcare providers, freedom fighters and journalists took the vaccine at the event.

Bangladesh plans to begin mass vaccination on February 7, after vaccinating about 500 healthcare providers in four other hospitals in the capital alongside Kurmitola Hospital and observing them for a week.

The vaccination began amid growing public doubts over the side-effects and the quality of the vaccine.

A Dhaka University study revealed that only 32 per cent people are ready to take the vaccine now amid the circulating speculations.

Health minister Zahid Maleque said at the event that the vaccine developed by Oxford-AstraZeneca and manufactured at Serum Institute of India was the safest vaccine compared with the other vaccines which were being used in the world.

He said that the vaccine recipients would immediately get treatment in case they developed side effects.

Prime minister Sheikh Hasina regretted the fact that some people developed a negative perception about the vaccine.

Hasina said that she would have taken the vaccine first, but ‘some people may have started criticising’.

People interested to get the vaccine needs to register them through Surokkha platform at www.surokkha.gov.bd or Surokkha mobile app. Surokkha is now open for registration.

Directorate General of Health Services additional director general Nasima Sultana, who was among the first five recipients of the vaccine, shared her feelings after half an hour of taking the jab.

‘I am not feeling unwell at all,’ said Nasima.

‘We, the frontliners, have been working since March. As an official of the health department, I wanted to help people by giving information and advice after receiving the vaccine,’ she said.

‘After getting the vaccine, the spot becomes reddish, it may cause nausea and body temperature may also rise, which is normal. It is not correct to think that the jab will have serious side effects,’ the professor assured.

‘Fifteen minutes have passed since I received the vaccine and there are no side effects,’ said renowned dentist Arup Ratan Chowdhury.

‘The vaccine has come as a blessing for us. I took it, others should take it too,’ said Arup, who was among the vaccine recipients on the first day.

Bangladesh has so far secured 70 lakh doses of the Oxford-AstraZeneca COVID-19 vaccine made by Serum Institute of India.

Bangladesh, which has so far tallied over 8,000 COVID-19 deaths and more than 5.33 lakh cases, on November 5, 2020 signed a deal with Serum and its local vendor Beximco to procure three crore doses of the vaccine developed by Oxford University and  British-Swedish pharmaceutical giant AstraZeneca and manufactured by Serum.

Bangladesh on January 21 received 20 lakh doses of the vaccine from India as a gift.

Clerics, migrant workers and bankers are also included in the first phase, but other highly vulnerable population segments, including many elderly people, factory workers and employees, day labourers, informal sector workers and self-employed people, have been left out of the priority list.

About 7,344 vaccination teams, with each team comprising two vaccinators and four volunteers, will inoculate the selected 1.70 crore people in three months February, March and April.

The country’s health agency has planned to inoculate some 13 crore people in phases.

Bangladesh expects a total of three crore vaccine doses from Serum Institute of India by June this year.

Being a low-income country, Bangladesh with a population of over 160 million people will also receive 6.8 crore doses of COVID-19 vaccines from the global vaccine alliance Gavi under a World Health Organisation pool of vaccines named COVAX.

The COVAX vaccines are due in the country by June 2021.

Earlier on the day, Sheikh Hasina outlined who would get how many COVID-19 vaccine doses among the priority groups in the parliament.

She placed the statistics in the parliament in response to a tabled question from Awami League lawmaker for Tangail-6 constituency Ahsanul Islam Titu.

Hasina said that in the first phase of COVID-19 vaccine distribution, 1.50 crore people, 8.86 per cent of population, will get two doses of inoculation over a span of two weeks in Bangladesh.

The list of the priority groups was prepared considering the guidelines of the Scientific Advisory Group of Experts of the WHO as well as the country’s context.

The vaccine will be preserved in 64 district EPI stores and 483 EPI stores of the country, she said.