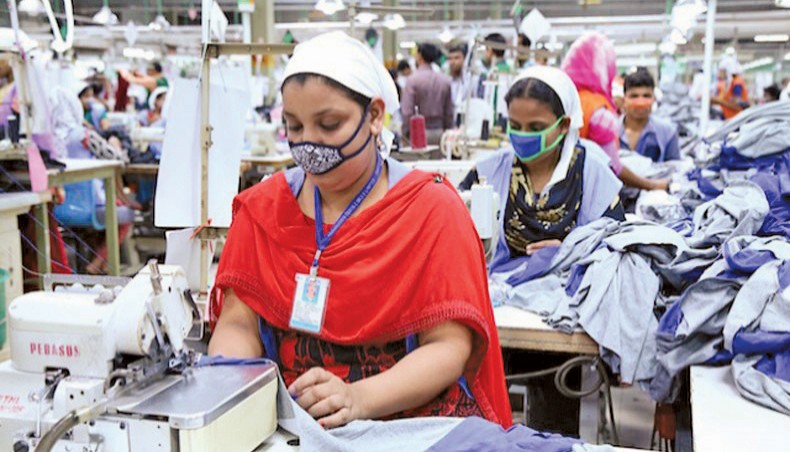 A file photo shows workers sewing clothes at a readymade garment factory in Dhaka. Lower-middle-income countries, including Bangladesh, witnessed the highest losses in working hours in 2020 due to the coronavirus outbreak, according to a latest report of the International Labour Organisation. — New Age photo

Lower-middle-income countries, including Bangladesh, witnessed the highest losses in working hours in 2020 due to the coronavirus outbreak, according to a latest report of the International Labour Organisation.

‘During 2020, lower-middle-income countries experienced the greatest losses in working hours which stood at 11.3 per cent, well above the global average of 8.8 per cent,’ said the new annual estimates in the seventh edition of the ‘ILO Monitor: COVID-19 and The World of Work’ released on Monday.

These lost working hours were accounted for either by reduced working hours for those in employment or ‘unprecedented’ levels of employment loss, hitting 114 million people globally, it said.

The report showed that the working hour losses were overwhelmingly driven by the stronger impact of the crisis on this country group during the second quarter, which stood at 29.0 per cent, compared with a global average of 18.2 per cent.

According to the report, lower-middle income countries also experienced the highest 12.3 per cent labour income loss in 2020 relative to 2019 while global labour income declined by 8.3 per cent.

The report showed that the massive losses in global labour income (before support measures are included), were equivalent to $3.7 trillion or 4.4 per cent of global gross domestic product.

Women had been more affected than men by the virus outbreak’s labour market disruptions and employment losses for women stood at 5 per cent versus 3.9 per cent for men, the ILO found.

Younger workers had also been particularly hard hit, either losing jobs, dropping out of the labour force or delaying entry into it, it said.

The ILO Monitor said that the employment loss among youth of the ages of 15 to 24 stood at 8.7 per cent compared with 3.7 per cent for adults.

This highlights the all too real risk of a lost generation, it said.

The report highlighted concerns of a ‘K-shaped recovery’, whereby those sectors and workers hit the hardest could be left behind in the recovery, leading to increasing inequality, unless corrective measures are taken.

The worst affected sector had been accommodation and food services, where employment declined by more than 20 per cent, on average, followed by retail and manufacturing, the ILO found.

‘While there is still a high degree of uncertainty, the latest projections for 2021 show that most countries will experience a relatively strong recovery in the second half of the year, as vaccination programmes take effect,’ the report said.

The ILO Monitor recommended that macroeconomic policies should remain accommodative in 2021 and beyond, including fiscal stimulus where possible, and measures to support incomes and promote investment for the recovery.

The ILO recommended extending international support for low and middle-income countries, which have fewer financial resources to roll out vaccines, and promote economic and employment recovery.

‘The signs of recovery we see are encouraging, but they are fragile and highly uncertain, and we must remember that no country or group can recover alone,’ said ILO director general Guy Ryder.