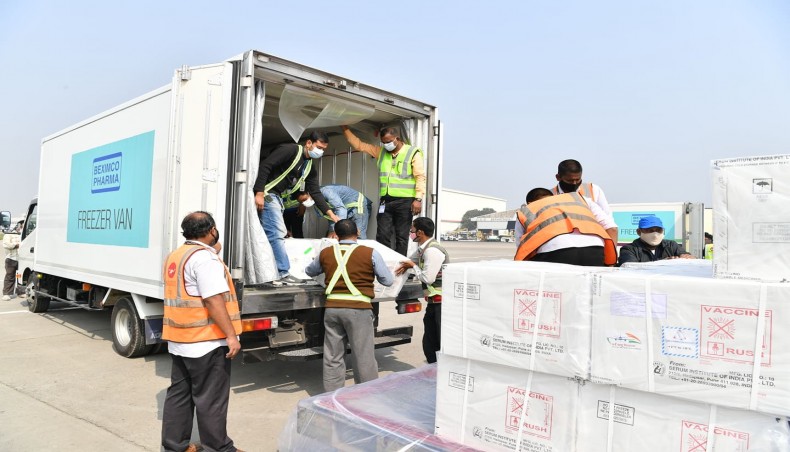 Bangladesh on Monday received the first consignment of the Oxford-AstraZeneca COVID-19 vaccine bought from the Serum Institute of India as 50 lakh doses of the vaccine arrived in Dhaka on a flight from India on the day.

Nine freezer-vans of Beximco, the distributor of the vaccine in Bangladesh, transported the quantity from the Hazrat Shahjalal International Airport to its warehouse at Tongi, Gazipur, after the arrival of the vaccine doses in boxes on an Air India flight from Mumbai at around 11:15am.

‘We’ll hand over the vaccine doses to the government and send them to the districts as per the government plan after necessary tests at the lab of the Directorate General of Drug Administration,’ said Beximco managing director Nazmul Hasan who received the consignment at the airport.

Bangladesh plans to begin the national COVID-19 vaccination tomorrow, with inoculating a handful of healthcare providers for observation for a week, before rolling out the campaign on February 8 across the country for the selected priority groups.

The Serum sent the first vaccine consignment as per a deal with the government and its local vendor Beximco to supply Bangladesh with three crore doses at the rate of $4 a dose while Beximco will get $1 for each dose for the transportation of the vaccine.

Nazmul also told the reporters that the rest of the three crore doses, as per the deal, would arrive in phases with 50 lakh doses every month.

From each batch of all the 50 lakh doses the DGDA testing laboratory will take samples to test them to get clearance for distribution in accordance with the government plan.

‘I think the distribution will begin in four to five days,’ Nazmul said.

He said that an electronic device was placed in each box of the vaccine, adding that the device gives temperature update in every 15 minutes.

The temperature update, he went on, will be used to monitor if the required temperature for preserving the vaccine is compromised at any level.

‘The cartons will be opened after an inspection by officials of the Directorate General of Health Services,’ Nazmul said, adding that Beximco will take the responsibility for any damage until the vaccine is delivered.

The vaccine should be kept between 2 and 8 degrees Celsius all the time.

‘We should ensure first that the cold chain is maintained from Mumbai to the district headquarters here. We will replace the relevant consignments if there is damage, shortage or any other problems in those,’ Nazmul said.

DGHS and DGDA officials were present at the airport to receive the vaccine consignment.

Bangladesh, which has so far tallied over 8,000 COVID-19 deaths and 5.30 lakh cases, on November 5, 2020 signed the contract with the Serum Institute of India and its local vendor Beximco on the procurement of the three crore doses of the vaccine developed by Oxford University and British-Swedish pharmaceutical giant AstraZeneca and manufactured by the Serum.

Bangladesh on Thursday received 20 lakh doses of the vaccine as gift from India.

Being a low-income country, Bangladesh with a population of over 160 million people will also receive 6.8 crore doses of COVID-19 vaccines from the global vaccine alliance GAVI under a World Health Organisation pool of vaccines named COVAX formed to ensure the access of poor countries to vaccines.

The COVAX vaccines are due in the country by June 2021.

The country’s health agency has planned to inoculate some 13 crore people in phases.

It has made a priority list of frontline health workers, freedom fighters, law enforcement agencies, personnel of the military and other forces, government officials, journalists, public representatives, employees of city corporations, municipalities and utility agencies, and religious leaders to vaccinate in the first phase.

Prime minister Sheikh Hasina is scheduled to virtually inaugurate the vaccination drive on Wednesday at Kurmitola General Hospital in the capital, with a nurse first receiving the first jab.

The nationwide vaccination programme will start on February 8, after a week-long observation of the 400–500 healthcare providers at five selected hospitals in the capital following their inoculation.

With support from WHO experts, Dhaka South City Corporation on Monday trained 85 vaccinators of the five hospitals.

The interested vaccine recipients have to register them through the website www.surokkha.gov.bd or the mobile app named Surokkha.

State minister for Information and Communication Technology Zunaid Ahmed Palak on Monday briefed the DGHS officials and experts concerned on the registration process at an event at the Prime Minister’s Office.

‘Everyone can self-register them for getting the vaccine through the Surokkha platform, which will require the NID, a cell phone number and other necessary information,’ he said.

The registered person will learn the time and the place of the vaccination through a mobile message and can download the certification of vaccination after completing the required doses, he said.

‘We want to assure the nation that everyone will get the vaccine,’ he said, adding that technologically laypeople like drivers and cleaners have been found easily understanding the Surokkha app use during its trial.

Prime minister’s principal secretary Ahmad Kaikaus urged the ICT ministry to swiftly resolve the technical glitch if detected when users register them through the Surokkha platform.

He also said that Bangladesh was the only country that was getting the Oxford-AstraZeneca vaccine from the Serum at a low rate outside India.

Health secretary Abdul Mannan said in the past week that they had targeted to inoculate 17 million people in three months.

Health minister Zahid Maleque on Sunday said that the government had made a priority list for the vaccination but everyone would get the vaccine in phases.

But, he said, ‘no one will be forced to receive the vaccine,’ as many doubt the vaccine about its side effects.

According to international media reports, the Oxford-AstraZeneca COVID-19 vaccine has been proven to be safe with no major side effects reported from the human trials.

It generates strong antibody and T-cell response for a long-term immunity against the novel coronavirus SARS-CoV-2, the reports said.

However, the Serum has not yet published any data from its India trials of the vaccine named Covishield, although there is phase 1-3 data from AstraZeneca, which has produced the original version of the vaccine.

India began its mass vaccination on January 16 with the Serum’s supplies, but the Indian government lags behind its target for vaccination.

Thousands of people are not turning up to vaccination centres across India fearing side effects, according to international media reports.

Health minister Zahid has recently said that the government will bear the expenses of treatment if anyone develops side effects after the vaccination.

‘Various countries are reporting adverse side effects of COVID-19 vaccines, including the Oxford-AstraZeneca one. We’ll arrange treatment for anyone having any side effect from the vaccine,’ he said at a meet-the-reporters event at Dhaka Reporters’ Unity in the capital on January 18.