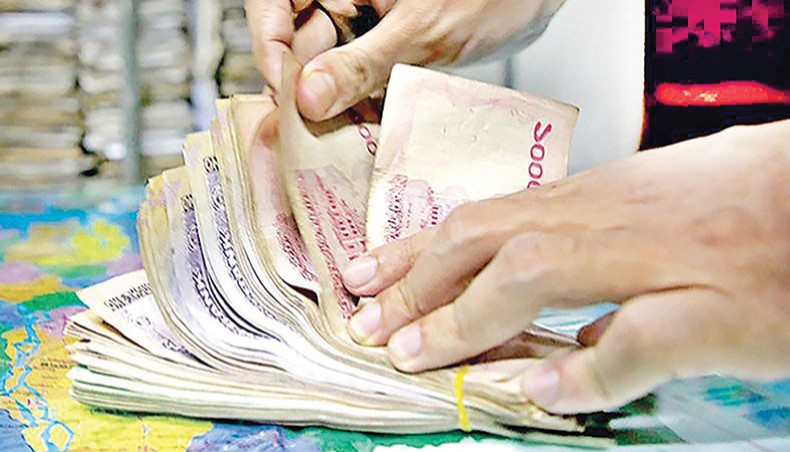 A file photo shows a man counting taka notes in the capital. Year-on-year deposit growth in the country’s Islamic banks at the September-end quarter of 2020 was much higher than the growth rate in the country’s overall banking sector at the end of the same quarter, reflecting a growing public interest in Shariah-based banking system.— New Age photo

Year-on-year deposit growth in the country’s Islamic banks at the September-end quarter of 2020 was much higher than the growth rate in the country’s overall banking sector at the end of the same quarter, reflecting a growing public interest in Shariah-based banking system.

With the increasing public hype over the Islamic or Shariah-based banking system, the market share of the Islamic banks against overall deposits in the banking industry rose to 25.85 per cent at the end of September 2020 from 23.98 per cent a year ago.

Year-on-year growth in deposits in the Islamic banks was 15.05 per cent at the end of September 2019.

BB officials, however, said that strict compliance with rules and regulations had become very much essential for sustainable growth of the Islamic banking sector.

As a Muslim-majority country, demand for Shariah-based banking products is on the rise, they said.

The BB’s quarterly report published on Sunday said that the COVID-19 outbreak had created challenges for the Islamic banking sector as it had done for the conventional banking sector.

‘The Islamic banking sector needs to properly implement stimulus packages to mitigate the adverse impacts of the pandemic and maintain its development roles in the national economy by promoting the saving-investment process and trade activities further,’ it said.

‘In fact, the Covid-19 pandemic is a real test for the Islamic banks in maintaining resilience and employing usual commercial tools as well as social tools in the recovery process of the national economy,’ the BB report said.

The Islamic banks should focus on support for the poor and destitute through enhanced investments in small and micro enterprises and increased expenditures in CSR activities, the central bank said.

To reap in the benefits of the growing popularity of the Islamic banking segment, two of the country’s conventional scheduled banks — NRB Global Bank and Standard Bank — were converted into Islamic banks in February 2020.

In 2020, a research report of global rating agency Moody’s Investors Service said that the conversion of the two conventional banks into Islamic banks in Bangladesh was credit positive for the Islamic banking sector of the country.

‘A bigger Islamic banking presence will raise awareness among the Muslim-majority population on financial products that are Shariah compliant. The subsequent rise in demand is likely to outweigh the increased competition, which will in turn drive growth and profitability of the sector,’ Moody’s observed.

With the growth in market influence of the Islamic banks, the traditional banks are losing market share.

In terms of investments, known as lending in traditional banking, the market share of the Islamic banks increased to 25.44 per cent at the end of the period under consideration against 24.59 per cent a year ago.

Seizing on the growing public interest in the Islamic financing system, the government for the first time launched a Shariahcompliant bond called the Bangladesh Government Islamic Investment Sukuk in December 2020.

The move drew around four times applications from investors against the bonds offered worth Tk 4,000 crore.