Two lakh to be vaccinated daily 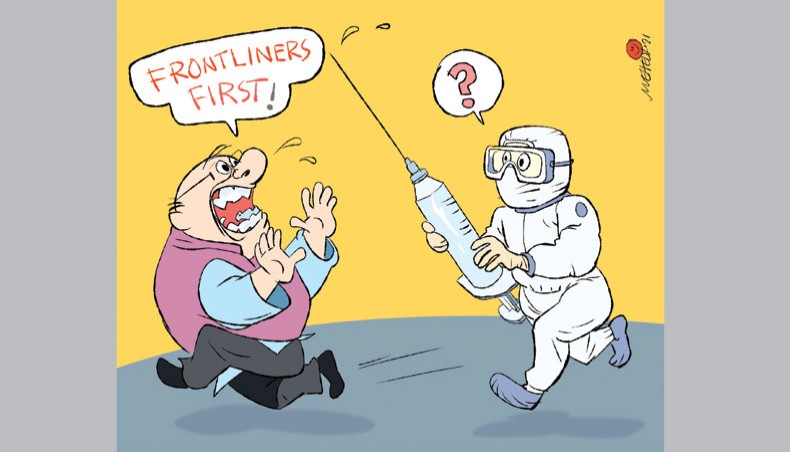 Health minister Zahid Maleque on Tuesday said that the government would launch the COVID-19 vaccination campaign with inoculation of health service providers, not of the VVIPs or VIPs.

Rejecting the idea of inaugurating the mass vaccination with inoculation of the VVIPs like the president and the prime minister and VIPs like cabinet members to boost public confidence amid concerns about the vaccine’s side effects, he said that they had planned to first vaccinate the frontline healthcare providers and then other priority groups as per the vaccination plan.

While talking to journalists at the Directorate General of Health Services, the minister was asked about if the government had a plan to follow the examples of top government leaders in other countries taking the vaccine publicly to boost public confidence in the vaccination.

‘Our plan is that the vaccination drive will begin with inoculation of frontline fighters. Doctors, nurses, police personnel and even journalists will get the vaccine first as per the pre-determined vaccination plan. We have no priority for the VIPs,’ Zahid replied.

With public suspicion of COVID-19 vaccine side effects, tens of thousands of people have skipped the inoculation in India, where the vaccination with the Oxford-AstraZeneca vaccine began on Saturday, according to media reports.

In Bangladesh, social media platforms abound with people expressing fear of adverse effects of the vaccine, with many stating that they will not take the vaccine.

‘Bangladesh cabinet members including health minister should take the vaccine shots publicly to boost public confidence, but it will never be. They will not take vaccine publicly,’ said Facebook user Jahangir Alom in a post.

Noted virologist Nazrul Islam said that top government leaders taking the vaccine on camera would encourage people to receive the shot as they were confused as to whether they should take or avoid the vaccine over after-effects.

‘It seems that the minister [health minister] has shown his lack of involvement in the vaccination programme,’ he told New Age.

‘People will increasingly doubt the vaccine if the government only demonstrates its duty, not its involvement in the process,’ said Nazrul, also a member of National Technical Advisory Committee on COVID-19 and a former vice-chancellor of Bangabandhu Sheikh Mujib Medical University.

Zahid Maleque on Monday said that the government would bear the treatment expenses if anyone developed any side effect after taking the COVID-19 vaccine.

‘Various countries are reporting adverse side effects of COVID-19 vaccines, including the Oxford-AstraZeneca one. We’ll arrange treatment for anyone having any side effect from the vaccine,’ he said in a meet-the-reporters event at Dhaka Reporters’ Unity in the capital.

Bangladesh expects at its disposal the first cache of 50 lakh doses of the Oxford-AstraZeneca vaccine from the Serum Institute of India by January 25, under a tripartite deal between the Serum, its local vendor Beximco and the Bangladesh government to purchase three crore doses of the vaccine.

The Indian government will give Bangladesh another 20 lakh doses of the vaccine as ‘gift’ which are expected  here on Wednesday or Thursday, said the health minister, while a Ministry of External Affairs of India release said that India was providing the vaccine doses as ‘grant’ not as gift.

Zahid said that he would receive the vaccine supply at the airport.

After a meeting with DGHS officials on the day, the health minister briefed the reporters.

He said that the government had planned to inoculate two lakh people every day during the mass vaccination expected to begin in the first week of February.

DGHS director general ABM Khurshid Alam has recently said that the vaccination campaign will begin early February after it gets 50 lakh of the three crore doses of the Oxford-AstraZeneca vaccine the Bangladesh government has purchased.

He said that a group of healthcare providers in the capital would be vaccinated and observed for a week before rolling out the mass vaccination programme across the country.

Khurshid said that the twenty lakh vaccine doses which India would provide as gift would be kept at storage facilities of the Central Medical Storage Depot, Expanded Programme of Immunisation and Tejgaon Health Complex.

The health minister said that the vaccination campaign would begin at the district and upazila hospitals first.

The government would consider opening vaccination centres at the union-level health facilities later, he said.

Bangladesh has beat the initial grim forecasts of the coronavirus wreaking havoc on the nation of 160 million people and has so far tallied about 8,000 COVID-19 deaths and 5.30 lakh cases since the first cases were detected on March 8, 2020.