The conundrum of free media vs fair trial 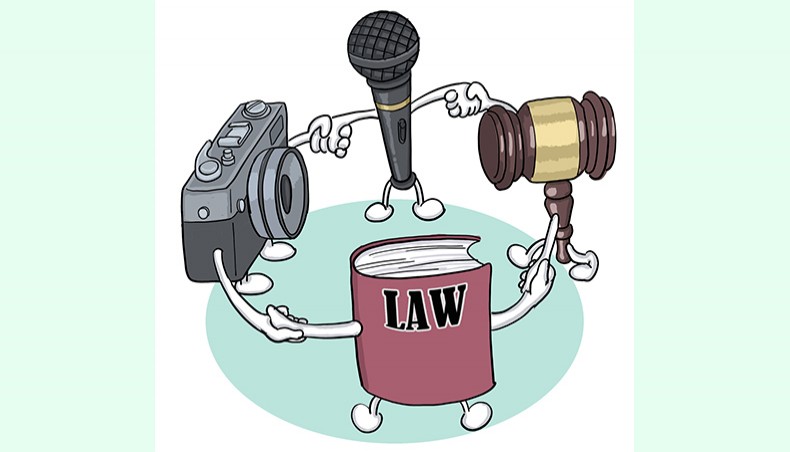 Media trials are exacerbating at an unprecedented scale every day.  The impact of such trials in pending cases impedes the process of ensuring justice besides intruding the right to a fair trial, writes Fariha Anjum

BANGLADESH being a democratic state is lawfully obligated to ensure freedom of expression as a fundamental right. It is a constitutionally mandated right specified in Article 39 which explicitly provides provisions regarding press freedom. Accumulating verified and reliable information, presenting national or international debates before the citizens as well as securing the right to remain informed is guaranteed by the free media.

On the flip side, the right to a fair trial is the crux point of criminal jurisprudence in Bangladesh which is often contravened due to the malpractice of media freedom.

The quintessence of fair trial or fair administration of justice is the ‘presumption of innocence until proven guilty’. The history and origin of a fair trial are inherited from the Magna Carta in the United States law as the narrative of a hard-won right that fills in the solitary guarantee against the exemption of state-violence.

In Bangladesh, the right to a fair trial has been recognised in Article 35 (3) of the Constitution where every person accused of a criminal offence shall be entitled to a prompt, public trial by an independent and non-partisan court or tribunal established by law. Fair trial is a cardinal characteristic of a democratic polity, determined by the rule of law.

However, both fair trial and freedom of the press are considered fundamental rights in Bangladesh where the right to a fair trial is an absolute and unabridged one and the latter is contingent on reasonable restrictions. Although media activism plays an important role to accomplish a fair trial, sometimes biased and unfettered intervention of media may constitute an adverse effect in the process of fair administration of justice.

The conflict between the right to a fair trial and the right to free media culminates in questioning the judges’ ability to determine and deliver justice due to excessive media coverage. A judge is generally perceived to be unpressurised by everything that the media portrays and ought to be impartial regarding internal or external factors in pending cases. However, in Bangladesh, the criminal courts of first instances where magistrates are the presiding judges are prone to get affected by the media coverage due to human vulnerability. For example, a magistrate may decline to concede bail to the accused being influenced by the media coverage and undue media publications thus obstruct the proper adjudication in the criminal cases.

Media representations have an adverse influence in terms of prejudicing the mind of general people as well. In the Nitesh Katara murder case, the Delhi High Court specified the impact of media reportage both in the public mind and the jury of criminal courts. The court contended that the media trial creates a predisposition not just in the minds of people in general yet additionally vitiates the ambience and this certainly tends to intimidate the magistrate or the sessions judge or the court in the decision-making process which is not a good sign for improvement of criminal law.

As stated by the Supreme Court of India, ‘Media Trial is the impact of the television and newspaper coverage on a person’s reputation by creating a widespread perception of guilt regardless of any verdict in a court of law’.  In countries like Bangladesh, the repercussions of a media trial are standing out like a sore thumb, causing the violation of human rights.

There are numerous cases where media trial breached the right to a fair trial along with intervening in the process of a court of justice in our country. For instance, the case of a terrorist attack in Gulshan in 2016, is the most important example of unrestrained interference of media where two hostages/victims/accused namely, Tahmid Hasib and Hasnat Karim were arrested under section 54 of the Code of Criminal Procedure based on suspicion.

Subsequently, certain photographs arose in media stirring up the speculation and media trial of the duo. The criminal legal procedure is often misconstrued exclusively to protect the defendants, thus the people in general, may not give it much importance, particularly in this case where the duo is accused of terrorism hinged on photographic evidence but the criminal procedure is important for a reasonable and fair administration of justice.

According to an annual report of the World Justice Project Rule of Law Index, 2020, amongst 128 countries and jurisdictions, Bangladesh ranked 115th, decreasing 1.6 per cent in terms of rule of law performance in the index. The report alone unveils the deplorable condition of the administration of the justice delivery system in our country.

The law enforcers in Bangladesh oftentimes proceed to expose the accused person before the media. By and large, the police are alleged to have coercively delivered the accused individual before media workers to make confessional statements. To show that the police are capable of nabbing the accused, the fundamental right of the person accused of a criminal offence thus gets crucified.

As much as the media’s responsibility is to report to the public, it is also incumbent on them to maintain a degree of caution and refrain from presenting the accused before the beginning of the legal procedure or publishing news or statements of the fugitives.

Most recently, the High Court has issued an injunction banning the media publicity of fugitives’ statements aiming to secure the right to a fair trial. Initiatives like this will be the forerunner of achieving a fair legal system in Bangladesh.

Media trials are exacerbating at an unprecedented scale every day.  The impact of such trials in pending cases impedes the process of ensuring justice besides encroaching the right to a fair trial. As opined by Lord Diplock, a prominent British judge, ‘Trial by a newspaper or, as it should be more compendiously expressed today, trial by the media, is not to be permitted in a country.’

The immoderate and overzealous media must differentiate between press freedom and wide latitude trying to acquire more readerships. Unbridled tampering of media in criminal cases needs to be stopped with the enforcement of more stringent measures.

Hence we can hope for a country with a fair, prompt, and impartial legal system, all the citizens living harmoniously.

Fariha Anjum is a student of law at the University of Chittagong.