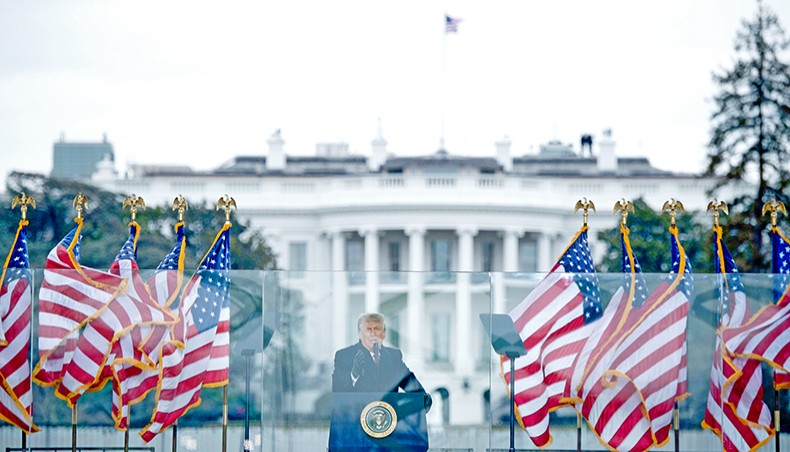 In this file photo, US president Donald Trump speaks to supporters from The Ellipse near the White House on January 6 in Washington, DC. — Agence France-Presse/Brendan Smialowski

US PRESIDENT Donald Trump knew that the world was watching him live on television when he addressed his base of white racist, supremacist that came to the Capitol on January 6 at his invitation to block the ceremonial joint session from certifying the president-elect Joe Biden as the next president. Yet, he incited them to break into the Capitol to force vice-president Mike Pence and the Republicans in the Congress to change the election results and give him a second term that they had no electoral, legal or constitutional right to do.

The president has now said to the media in his first public utterances since the attacks on the Capitol, while going to Texas on January 11 for what would be his last official duty as president outside Washington, with no more access to Twitter or Facebook that have banned him, that he was ‘picture perfect’ in what he did on January 6. With loads of video footage of the attacks that occurred outside the Capitol and inside now flooding the mainstream media, the president’s insistence that he did the right thing, if it can be taken lightly, is a joke on America. Seriously, his insistence that what he did on the 6th was ‘picture perfect’ must be considered nothing else but delusional by the Americans who are sane.

Six people died in the act of domestic violence in the Capitol on a day that history will undoubtedly record as the darkest day in the US’s political history. The death will be investigated that will easily establish the president’s involvement because of the heaps of evidence he left. Video footage shows him encouraging these murderers/domestic terrorists/insurrectionists. In Tweeter feeds, the president said that he loved those that committed ‘domestic terrorism’ inside the Capitol and the murders. Ivanka, who watched the carnage from the White House by the side of her father, called these ‘terrorists/murderers’ ‘patriots.’

That the president would still call his actions on January 6 ‘picture perfect’ is travesty, a caricature of everything that the United States stands for — as the world’s oldest democracy. It was never in doubt that the president was capable of committing the unpredictable. He said leading to the 2016 elections that he would not lose a single vote even if he walked down the 5th Avenue in New York in broad daylight and shot someone or groped any woman without her permission. Leading to the elections, he said that he could not lose unless the elections were stolen from him and that he would have to think whether he would leave the White House if he lost. In his four years in office, he lied like it was a virtue. His party and his base indulged in his lies.

Any or all the above fades instantly compared with what the president masterminded and led on January 6. It was an act of insurrection and ‘domestic terrorism’ against US sovereignty. The 9/11 attackers tried the same. In any other country, even in a so-called banana republic, a president would have lost office and been locked up in jail for crimes comparable to those that President Trump committed. The American constitution has two clear provisions to deal with the despicable actions of the president. He can be removed under the 25th amendment and/or he can be impeached by the House and convicted and removed by the Senate.

The two options are on the table in the House at the time of filing this piece. The Democrats have moved the resolution to ask vice-president Mike Pence to remove the president under the 25th amendment. They have also put forth the impeachment resolution for inciting the insurrection on Capitol. The move under the 25th amendment appears still-born because the vice-president will not do what is required. The Republicans in the House are not behind the Democrats to pass a unanimous resolution to create the pressure that would compel Mike Pence to act.

The Republicans in the House are not with the Democrats either to impeach the president that the Democrats can and will, nevertheless, carry through because they have the majority in the House making the president the first in US history to be impeached twice. The president will, nevertheless, not be removed from office because the Republicans in Senate who will hold the majority till the Biden administration assumes office are unwilling to fulfil their constitutional duty to remove him from office the president who has been caught with his pants down in committing the worst impeachable offence in US history. In 1974, the Republicans forced president Nixon for the Watergate scandal that was child’s play compared with the offence that the incumbent president committed.

The same Republicans who in 1974 placed the country and the party above their personal political ambitions to remove president Nixon for far lesser crimes are now indulging the incumbent president for far greater ones because they fear that, otherwise, his huge base would go against them in the 2022 and 2024 elections. President Trump will leave on the 20th but unless the Republican Party reinvents itself. The country will only slide further because it will leave the country’s two-party democracy that has helped it to become a ‘role model for democracy’ for the rest of the world will, to use a cliché, find itself in the ICU.

Trump and his white racist and ‘terrorist’ base also exposed another dangerous malaise in US government and politics, one that the Black Lives Matter movement tried to expose through the movement leading to the November 3 elections, namely that systemic racism is as much a reality in the United States as is the fact that the sun rises in the east and sets in the west.

The president-elect Joe Biden flagged this systemic racism clearly when he asked Americans to consider what would have happened if the ‘terrorists’ that attacked the Capitol had not been whites and, instead, blacks and Muslims. He did not have to explain. Joe Scarborough of the MSNBC, a former Republican member of Congress, spelt it out, nevertheless, and most Americans agreed. He said that if these ‘terrorists’ had been not whites and, instead, blacks and Muslims, there would have been a massacre at the Capitol and the majority of the people who leisurely walked out of the Capitol would either have been dead or arrested.

Some members of the Capitol Hill Police opened the door to the attackers although the majority showed exemplary courage to protect the Capitol and resist the attackers. Nevertheless, some showed them the way inside the complicated layout of the Capitol buildings and even took selfies with them. The attackers were allowed to carry out their mayhem for hours although what they did was watched in real time by all who could and should have stopped them on their heels. There was not a single arrest at the scene of the crime. The ‘terrorists’ were allowed to walk out of the Capitol like they were coming out of it after a visit as tourists.

Postscript: The ‘domestic terrorists’ are planning more attacks on the Capitol and the legislatures of the state capitals between 17th and 20th. The president still believes that he should be cheered for his actions on the 6th, not condemned. The Republicans are showing some signs of waking to their mistakes to bring their party from the brink. Senator McConnell has stated that he ‘believes impeachment push will help rid Trump from the GOP’ although he has not said if he will vote to convict. And 20 GOP House members have indicated that they would support the impeachment resolution, raising hope for the country at its hour of desperation.

M Serajul Islam is a former career ambassador and writes from Maryland, USA.