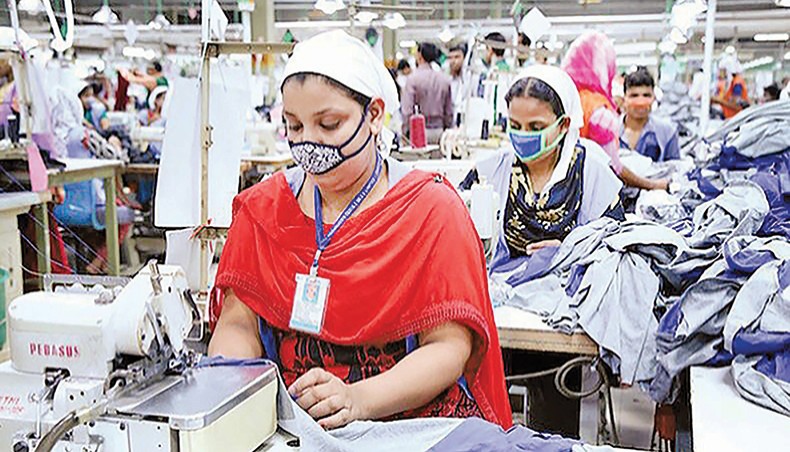 A file photo shows workers sewing clothes at a readymade garment factory on the outskirts of Dhaka. The country’s export earnings in just concluded year of 2020 fell by 14.57 per cent to $33.60 billion from $39.33 billion in the previous year due to a lower shipment of readymade garment products as the COVID-19 outbreak has hit hard the global business. — New Age photo

The country’s export earnings in just concluded year of 2020 fell by 14.57 per cent to $33.60 billion from $39.33 billion in the previous year due to a lower shipment of readymade garment products as the COVID-19 outbreak has hit hard the global business.

Overcoming an unprecedented supply chain disruption in March-May of 2020, export earnings began to increase from June but the second wave of COVID 19 started taking its toll on the earnings from October, exporters said.

They also said that the country’s export business faced a dire situation in the first half of 2020 as global buyers halted and cancelled their import orders for readymade garment products due to the coronavirus pandemic.

Exporters fear that the downward trend in export would continue till April 2021.

Export earnings in the second half (July-December) of 2020 almost backed on track but the second wave of the outbreak in the United States and European countries has caused more woes to the exporters.

The RMG witnessed downturn in export in December with 9.64 per cent fall, which wrapped up the annual export performance for 2020 with an unprecedented fall of 16.94 per cent, Bangladesh Garment Manufacturer and Exporters Association president Rubana Huq told New Age on Monday.

According to the EPB data, export earnings from woven garments fell by 10.22 per cent to $7.02 billion in July-December of FY21 from $7.81 billion in the same period of the previous fiscal year.

The export earnings from leather and leather goods in July-December of FY21 fell by 6.24 per cent to $446.13 million from $475.83 million in the same period of the previous fiscal year.

‘In December, woven garment export has posted the worst performance since June 2020 as it declined by 18.07 per cent. Knitwear export managed to have a relatively stable position with negative 0.45 per cent growth in December, thanks to the demand for apparel for home use,’ the BGMEA president said.

‘Given the effect of lockdowns in Europe and the USA and their impact on retail and demand, the worst ever Christmas sales the world has seen, and most of all the effect of price decline (which is around 5 per cent since September 2020), it was a dark year for the industry that we have seen,’ she said.

‘As the uncertainties and stresses caused by the second wave still persist coupled with the relatively poor administration and unavailability of vaccine, and the impact on global economy it would leave, this downtrend in export will probably continue till April of this year,’ Rubana added.