23 YEARS OF CHT PEACE ACCORD

Full implementation is what is needed 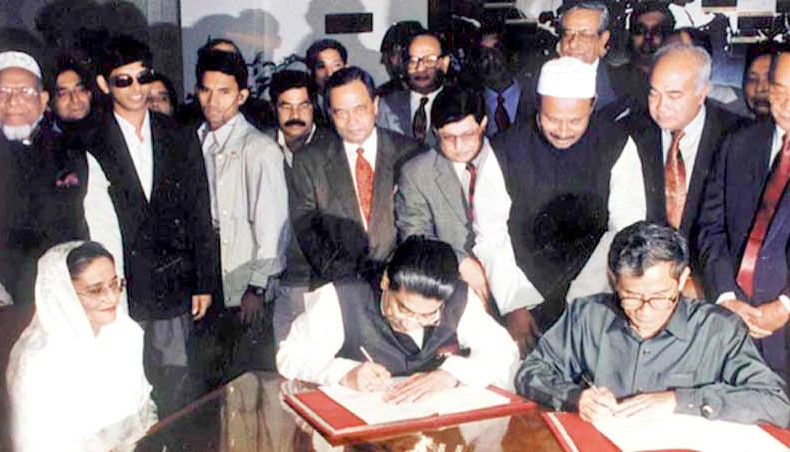 THE prime minister Sheikh Hasina, in her first tenure as prime minister, and the Parbatya Chattogram Jana Sanghati Samiti signed the Chattogram Hill Tracts Peace Accord on December 2, 1997, ending conflicts that hat continued since the 1980s. The expectations of ordinary people of the hill districts were that the region would become free of conflicts as a result of the agreement. But even after the agreement, the region has remained somewhat restive.

There are total 72 clauses in the peace agreement, but important issues such as land management, land commission and police administration are still unresolved and little attended to. While the government claims that most of the clauses of the agreement are implemented, the Parbatya Chattogram Jana Sanghati Samiti says that only 48 clauses are being implemented. The main problem in the Chattogram Hill Tracts is land-centric.  According to the peace accord, a land commission will be formed to resolve the issues, but conflict and mistrust still exist as the commission’s activities did not begin thoroughly. As a result of a partial implementation of the peace agreement, the land of the indigenous peoples are forcibly occupied while rights violations in the region are reported to be rampant.

Even after 23 years of the peace agreement, the hill people are still deprived of the benefits of the peace accord and are suffering as exploitation are still going on unabated. While the peace agreement calls for indigenous land rights, land security, resettlement of hill people displaced by conflicts and the withdrawal of temporary security camps, it is worrying that the issues have been left somewhat unattended. Although the agreement calls for governance through the district councils formed in the three hill districts, the provisions of the agreement are violated as the councils are run by unelected representatives. The peace accord was a great achievement to the then government, but the fate of the hill people is still unchanged. The peace accord brightened the image of the then Awami League government internationally and Sheikh Hasina also received the UNESCO Peace Prize in 1999. But the agreement has failed to change the life of the people who had fought and shed their blood for peace.

Indigenous people are marginalised day by day as a result of eviction from their ancestral land in the name of development or tourism. Because of a lack of political will of the government, the quality of life of the people is very low as development activities have failed to ensure their participation. Where eco-tourism could improve the living standards of ethnic minority peoples, rights are violated by evicting them from their land and making the land tourist spots. The process pursued by many to change demographics of the region is highly reprehensible.

Even after 23 years of the accord, the dream of the hill people to live with their rights and dignity remains a dream. The peace accord gave rise to hopes and aspirations among the hill people, but they are disappointed today as the accord has not been fully implemented. The non-implementation of the peace accord is creating a distance between the government and the indigenous people.

Parban Chakma is a student of law at the University of Dhaka.