Gilgit-Baltistan in the context of the ‘Kashmir problem’ 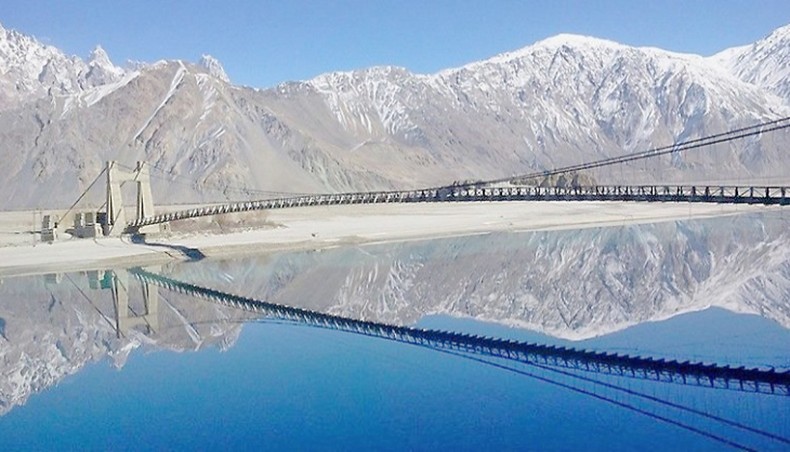 THE former principality of Kashmir was among several hundreds of territories with varying degrees of autonomy on the Indian subcontinent, and in its environs, that became part of British India in the 19th century, the de facto heir to which is modern-day, completely independent Republic of India.

But in terms of territory, the latter ‘inherited’ far from everything, and for some of its citizens today that fact serves as the reason for nostalgia for its ‘glorious past’ — something that is admittedly popular everywhere. Among the ‘losses’ we will mention here, the main one is represented by the Islamic Republic of Pakistan, which enjoys independence to no less a degree. Today, Pakistan owns about 40 per cent of the territory controlled by the former principality, and another 10 per cent is controlled by China. This means that about half of Kashmir is part of modern-day India.

‘Carving it up’ this way ended up being the result of numerous wars, and we will touch upon two: The Indo-Pakistani War of 1947–1948, which broke out immediately after an independent India and Pakistan formed, as well as the Sino-Indian War of 1962. The words ‘war’ and ‘justice’ are not compatible with each other, and one of the participants in the former always considers its results to be ‘unfair’.

However, in this case, everyone is unhappy with the ‘post-war’ situation in Kashmir, but chiefly India and Pakistan, each of which has its own reasoning for this. For India, they are mostly ‘historical’ in nature, owing to which the Pakistani part of what was formerly Kashmir is designated by the established catchword Pakistan Occupied Kashmir. In Pakistan, they point to the predominantly Muslim population in the present-day Indian state of Jammu and Kashmir, ‘whose rights are being suppressed by the Hindus’. Along with that, the fact that one article in the constitution last year was rescinded by India is used as one piece of evidence; this had conferred a special status upon the state.

The author in no way supports anyone’s position in this dispute, and is primarily concerned about the gravity of the ‘problem’ sparked by the Indo-Pakistani confrontation in Kashmir. Since, as was noted above, both parties in this dispute have repeatedly resorted to the services of using ‘the latest argument’.

Generally speaking, armed actions with various scales in the area of the so-called Line of Control that divides Kashmir have gone on almost nonstop for decades. In the Indian state of Jammu and Kashmir, both military and civilians are targeted. Consequently, India and Pakistan more or less constantly face the threat of full-scale war, as was the case, for example, after the terrorist attack in Pulwama in February 2019.

The magnitude of this threat should not be underestimated, and for at least two reasons. First, India and Pakistan are both de facto nuclear powers. Second, looming behind them the presence of the two leading world powers, the USA and China, is quite perceptible. Moreover, the state of affairs is just as laden with confrontation as the region around Taiwan. This means that the ‘Kashmir problem’ is no less of a serious challenge to global peace than the ‘Taiwanese’ one. In terms of the degree of danger, only the situation in the South China Sea is perhaps able to ‘contend’ with both of them.

The reason for the latest turn for the worse (or ‘update’, as is written in the title) for the ‘Kashmir problem’ was a statement given by the prime minister of Pakistan Imran Khan on the decision made by the government out of principle to give Gilgit-Baltistan ‘provisional status’ as a full-fledged (the fifth in a row) province among the country’s administrative divisions. This statement was made on November 1 this year that is on a day that is a national holiday due to the fact that during the war in 1947 the territory of present-day Gilgit-Baltistan was kept from being given over to be controlled by Indian troop units.

Gilgit-Baltistan (until 2009 designated as the ‘Northern Territories’) occupies about 85 per cent of the entire part of the former principality of Kashmir, which is now controlled by Pakistan. Another 15 per cent is accounted for by Azad Kashmir, which has the status of a ‘self-governing territory’ within Pakistan.

It is worth reiterating that India lays claim to both of these territories and, in particular, the assertion that Gilgit-Baltistan belongs to it gives rise to another (potentially extremely important) claim that it ‘borders’ Afghanistan along a section of land that stretches about 100 kilometres.

Since there is no such de facto common border, the issue of how to participate in deciding the future fate of Afghanistan is taking on increasing importance for it after Donal Trump’s decision (while it is still in force) on completely withdrawing the US military from there, and the United States has to resolve this by creating bypass routes through Iran. But projects to create those are marked by a slew of heightened risks, and out of those the chief one arises from the sharp aggravation in Iran’s relations with the US.

As far as the aforementioned claims laid by Delhi to Gilgit-Baltistan are concerned (and in regard to Pakistan Occupied Kashmir as a whole), the statement made by Imran Khan on November 1 contained an unequivocal message: ‘Forget about it’. At the same time, references were made to some UN Security Council documents, and to last year’s legislative activities performed by the Indian parliament, which concerned not only the status the state of Jammu and Kashmir has.

India’s reaction to this message was quite expected. Since information leaks about plans by the Pakistani government to give Gilgit-Baltistan the status of a province occurred earlier, then in September this year, on behalf of the Indian ministry of foreign affairs it was affirmed that these intentions ‘has no legal basis whatsoever, and is totally void ab initio’.

As is almost always true in these instances, the parties to the conflict related to the ‘Kashmir problem’ cite ‘international law’. To put it more precisely, they cite their own interpretations of its individual components.

It is worth noting one issue selected by Imran Khan concerning the statement under discussion. It was made two weeks before the elections in Gilgit-Baltistan, in which the Justice Movement led by the prime minster won one-third of the seats in the local parliament, and will be able to form a (local) government, relying on coalitions with independent legislative deputies.

Just like Imran Khan’s statement on the status of Gilgit-Baltistan, the very fact that elections are being held here was given an equally negative assessment by India.

We should also point out the previous surge in turbulence inside Pakistan due to the speeches given by the current government’s opposition parties. All sorts of complaints have been put forth, and not only against the prime minister but also the commanders with the armed forces, meaning against those who actually hold the country’s reins of power. In a statement made by Imran Khan on November 1 India was, quite expectedly, accused of provoking the riots.

As far as India’s and Pakistan’s ‘older brothers’ are concerned, the situation in the relations between the US and China has taken a pause, and is now in a state of uncertainty, which has to do with the process of transferring power in Washington to the new administration. By all appearances, that will weigh heavily on the interests of a public that at the end of 2016 was trying to resolve the issue of ‘managing to run to the Canadian border’. This has the same relation to the American people that a boil on the back side of the body does. Its representatives in the administration have already become involved in their traditional business of selling hot air (both to the Americans themselves and the rest of the world) in the form of fake labels, such as ‘the US leadership mission in the world’.

However, what sort of arrogance this is after the cosmic shame associated with everything that accompanied the last act of ‘American democracy’. Again, cynical statements are being made about ‘the right and the necessity for the United States to sit at the head of the world table,’ and claims are being put forth about the threat posed by the generalised concept of ‘Putin’.

For some reason, euphoria is reigning in India, mainly because of assumptions made about the number two government post, now occupied by the half-Indian Kamala Harris. Even though ‘under Trump’ everything seemed very good in US-Indian relations. But Kamala Harris has already declared that she is, above all else, a ‘proud American’. It should be added that she is very concerned about various kinds of ‘humanitarian’ problems present in other countries. Who knows what position she will now take on the ‘human rights’ situation in the state of ‘Jammu and Kashmir’, which has already raised some concern in Congress among some of her fellow party members.

Pakistan, it seems, should not expect anything good from powerful American ‘human rights activists’.

In these conditions, India and Pakistan should forge a peace founded on the principle ‘it is what it is’, meaning without factoring in the ‘glorious past’. That would drastically constrict the space for manipulation by various international ‘human rights’ parasites.