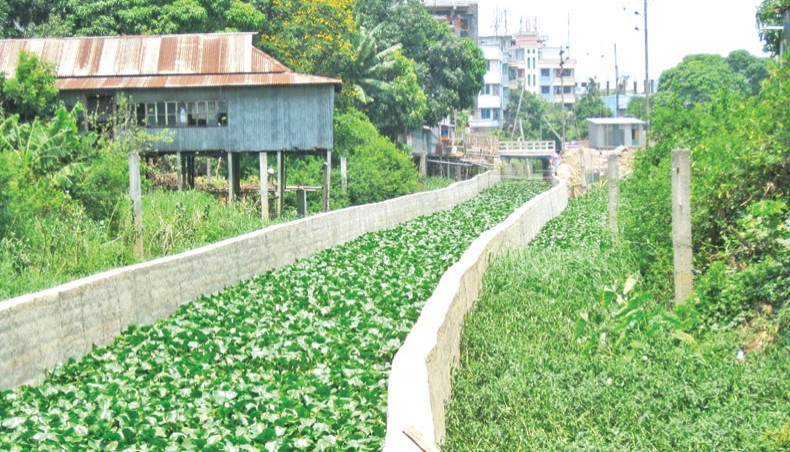 Jirani canal, lined with concrete walls under a Dhaka WASA renovation project, has become a narrow drain at Basabo in Dhaka. This photo was taken recently. — Ershad Kamol

Over 40 canals of the capital have been converted into box culverts, roads and occupied for various government projects, reveal four studies.

The studies were conducted in the past three years by the National River Conservation Commission, Dhaka Water Supply and Sewerage Authority, Centre for Environmental and Geographic Information Services and Institute of Water modelling.

Findings also show that nine other big canals have been converted into narrow concrete channels in the name of renovation by the DWASA.

The studies identified hundreds of big businesses and individuals as the grabbers of the capital’s canals resulting in an adverse impact on its drainage system and water recharging process.

Bangladesh University of Engineering and Technology’s former civil engineering professor Mujibur Rahman, who developed the master plan for the Hatirjheel beautification project, said that the government agencies had failed to realise the importance of protecting the canals and thus destroyed them by developing box culverts, roads and other structures, for which the city dwellers were now facing acute waterlogging even after a moderate shower.

People complain about facing havocs after such showers and about the life near the canals that carry human sewage while the WASA said that the capital’s underground water table was depleting drastically for lack of water recharging and the over extraction of ground water for an estimated 1.5 crore people in the capital.

‘The construction of roads and other structures on the canals by various agencies have encouraged thousands of individuals and businesses to encroach on the canals,’ Mujib said.

‘The canals are clogged by wastes and they only carry sewage as the WASA has failed to bring the capital under a separate sewage system,’ he added.

Still, he said, the canals drain out some 80 per cent of the storm water from the capital to its surrounding rivers — the Turag, Balu, Buriganga and Sitalakhya.

‘The occupied land of canals and rivers must be reclaimed and the responsible officials and grabbers must be punished,’ he said.

The government does not have data about the number of canals and the total area of canals grabbed so far.

A joint study carried out by the CEGIS and the IWM in 2017, commissioned by the cabinet committee for formulation of the capital’s detailed area plan, counted 135 canals in and around Dhaka city.

The National River Conservation Commission in October handed over to different agencies a report stating the names of city 77 canals and the nature of encroachment on them though the Dhaka deputy commissioner’s office has claimed for many years that the number of canals was 54.

The conversions, with funds from the World Bank, Asian Development Bank and Japan International Cooperation Agency, were made in 1989 with the objective to retain the canals as drainage channels, allowing roads above them, government officials and drainage experts said.

The problem is that the projects never considered the issue of how to clear and maintain the box culverts and as a result they got blocked with dirt and construction materials, drastically slowing down the drainage of water resulting in waterlogging in the central area of the capital from Mohammadpur to Khilgaon and from Tikatoli to Mirpur, they said.

The WASA, under a World Bank-financed project, choked up to 50 per cent of the canals Jirani Khal, Sutibhola Khal, Mohakhali Khal, Shahjadpur Khal, Sangbadik Colony Khal, Ibrahimpur Khal, Ramchandrapur Khal, Katasur Khal,  and Dwigun Khal by converting them into narrow concrete channels in the past one decade, according to WASA documents.

The WASA and NRCC studies state that the Dhaka DC office has grabbed Baunia Khal partially for developing a settlement for landless people under the Bhashantek Rehabilitation Project in Mirpur 14, the National Housing Authority has occupied five canals in Rupnagar housing area in Mirpur, including the Rupnagar Prodhan Khal and its branches, and the Civil Aviation Authority has taken Kasaibari Khal.

Besides, the studies say, the Gas Transmission Company Limited has occupied Kalyanpur Khal and the Rajuk has blocked Satarkul Khal for developing an approach road to Purbachal while a Dhaka north city corporation ward councilor has built his office on a portion of the canal.

The NRCC in its study states that 1,434 acres of land of Bhatara Khal, Dumni Khal, Sutibhola Khal and Boalia Khal have been grabbed by Bashundhara Residential Area.

Jamuna Group, Akij Group and hundred other establishments and individuals have encroached on Tongi Khal, reads the NRCC study, adding that Uttara University and BGMEA, which had earlier grabbed Begunbari Khal, have grabbed a portion of Diabari Khal.

Kalyanpur Khal has been grabbed by former lawmaker SA Khaleq, according to the WASA report.

Adil Mohammed Khan, general secretary of Bangladesh Institute of Planners, said that the government over the years had just carried out one after another study and prepared master plans for listing the names of grabbers and reclaiming the occupied lands from them.

‘Those studies and plans achieved no result as the responsible agencies themselves have grabbed canals and remained silent while powerful quarters have occupied the canals,’ he said, adding that grabbing and polluting the canals have, however, continued.

‘The commission tried to hide the facts and falsely accused a reputed company that is doing business by developing purchased lands,’ he said.

Syed Belayet Hossain, executive director of Amin Mohammad Group, said that no developer could hand over plots to the buyers unless they had valid right to the land.

‘The responsible agencies must investigate the fabricated reports prepared by the River Commission to tarnish the image of the businesses,’ he said.

BGMEA vice-president Arshad Jamal said that they had developed their new building in Uttara on their purchased land, not on any water body or government property.

ULAB university PRO Wahiduzzaman said that the university was maintaining a part of Ramchandrapur Khal after its renovation with their own fund.

‘We have also applied to the deputy commissioner’s office and the water resources ministry to get the responsibility of maintaining and beautifying the part of the canal,’ he added.

Locals, he went on, have rather developed mosques and houses grabbing the canal’s land.

Dhaka’s additional deputy commissioner Md Ilias Mehedi said that the district administration’s office had suspended the settlement project on Baunia Khal in Mirpur and would relocate the project.

WASA managing director Taqsem A khan said that the conversion of natural canals into box culverts was a suicidal decision but he refused to comment on the recent choking of the big natural canals by his agency that has converted them into concrete channels.

Housing secretary Md Shahid Ullah Khandaker said that the NHA was negotiating with the WASA for handing over the grabbed lands in Rupnagar area while the Rajuk has developed a big canal in Uttara as it grabbed Digun Khal partially for developing an approach road.

‘We are also making a review to further develop the blocked Satarkul Khal,’ he said.

‘We have initiated a project to reclaim 94 kilometres of the 34 canals in the DND area, which have been converted into roads by the local government bodies,’ WDB central zone chief engineer Md Abdul Matin Sarkar said.

Dhaka south city mayor Fazle Nur Taposh and Dhaka north city mayor Md Atiqul Islam said that they would evict all encroachers and dismantle the roads developed by the undivided city corporation after they would take over  from the WASA the responsibility of maintaining the canals.

Local government and rural development minister Tajul Islam, convenor of a master plan-executing committee formed for freeing Dhaka’s rivers and canals from the grabbers, said that they would reclaim 39 canals soon.

‘We are also planning to demolish box culverts to bring back Dhanmondi Khal, Dholai Khal and others into their original existence,’ he said.