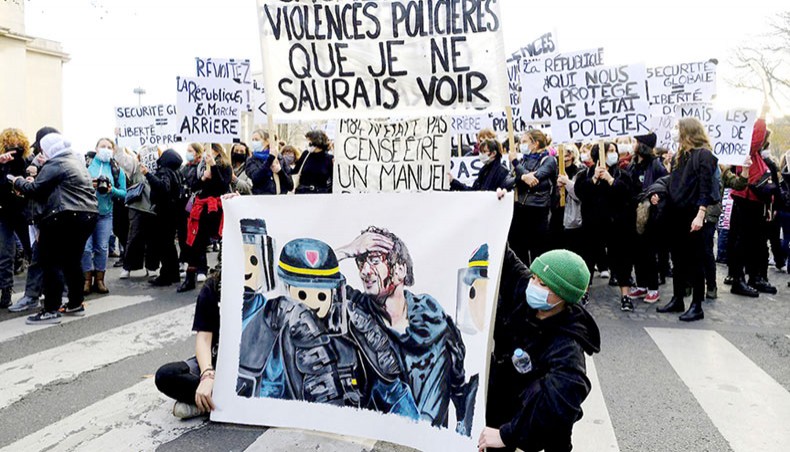 Journalist union members and Gilets Jaunes protesters mark the second anniversary of their movement protest against the global security law on Place du Trocadero near the Eiffel Tower on November 21. — PA Images/Alfred Yaghobzadeh

THE French National Assembly is currently examining, with the usual fast track procedure that prevents and marginalises parliamentary debate, a bill called ‘global security’. This law, filed on October 20 by a group of MPs from the presidential party, couched in the best neoliberal rhetoric, aims to provide a new framework for security actions that its drafters promise will be ‘inventive and innovative’.

With these two adjectives, ‘inventive and innovative’, the legislators are probably referring to the three highly controversial articles of the proposal that concern the recording and dissemination of images in the context of police actions. Perfectly in line with the trend of the times — and by consequence, we are sorry to have it observed, with very little inventiveness and innovation — these articles impose a general surveillance for the many and a privileged disclosure for the few, as they provide for ground mass surveillance, air mass surveillance and a ban on documenting police action.

Article 21 of the law authorises the police and gendarmes to film their interventions by ‘mobile cameras’, to access the images they have recorded and to transmit them in real time to the command post; article 22 proposes to authorise the deployment of drones to monitor public space; article 24 proposes to prohibit the public from disseminating ‘the image of the face or any other element of identification of an official of the national police or of a soldier of the national gendarmerie when acting within the framework of “a police operation” and when this dissemination is made “with the aim of harming his physical or mental integrity”.’

These provisions add fuel to the flames of an increasingly tense relationship between the police and the population. The police, who we must be clear about, have in recent years been impoverished and forced to mechanically optimise their performance through drastic neoliberal reforms, and who are also exhausted by the fight against terrorism, have been used in recent years as an instrument for the repression of social discontent. Faced with the escalation in social protest, in particular from the Gilets Jaunes, the government has explicitly chosen to demand from the police a ‘confrontational approach’ in the handling of demonstrations.

As the association La Quadrature du Net explains, the confrontational approach ‘aims above all to dissuade the population from taking part in demonstrations, whether by psychological exhaustion of the participants (practice of the trapping, blocking or filtering of the entries and exits of the march route, tear-gassing, body searches, abusive behaviour) or by physical violence (LBD, grenades, charges)’. This policy has given way in the last two years to a fully fledged state violence, which caused an estimated 6,000 persons injured, 318 severe head injuries sustained by protesters; the hands of five protesters torn off by explosive grenades; 35 people blinded by being shot with ‘flashbang grenades’, as well as three deaths.

In addition to clashes with demonstrators, in recent years the police have multiplied discriminatory, often violent, racial profiling, focused on the population of Arab or Black origin; they were recently sent to break in, search and arrest four ten-year-old (ten!) children on charges of being apologists for terrorism, who were then released a few hours later; and, what is more, they have killed 42 people since 2019, including the delivery boy, Cédric Chouvat, killed in Paris by ventral tackling and strangulation following his ‘outrageous’ attempt to… film his arrest.

The situation is so serious and beyond control that the Council of Europe through its commissioner for human rights, the European Parliament and the United Nations have all expressed concern and strongly condemned the disproportionate use of police violence in France.

IN THIS context, the filing of this law is received with concern and alarm not only by the population, who violently protested over the bill in the last days, in spite of the lockdown, but also by all the national and international bodies that guarantee fundamental rights. While an online petition has been already signed, as we write, by 90,000 people, the UN High Commissioner to Human Rights, the Defender of Rights, the National Consultative Commission on Human Rights, the League of Human Rights, the Journalist National Unions, Amnesty International, Reporters without Borders, Greenpeace plus a collective of 65 organisations, have all expressed concern about the potential threat to right to privacy, right to image, freedom of expression, press freedom, right to demonstrate represented by the global security law.

In the face of this outcry, the government is simply in denial: ‘When I hear of unheard-of and illegitimate police brutality, I am flabbergasted, and that’s the most polite word I can think of’ said the former minister of interior Christophe Castaner, who is one of the first signatories of the law. ‘Do not speak of repression or police violence, these words are unacceptable in a rule of law’ repeated Emmanuel Macron. ‘When I hear the word police violence, I suffocate’ echoed the minister of the interior, Gerard Darmanin.

This impenetrable stance becomes more understandable when we consider that the French government is caught in a vice. On the one hand, the presidential majority needs to secure the support of the exhausted and dissatisfied police, which, due to the acceleration of neoliberal reforms and the governmental inability to handle social conflict (see for example the inconclusive experience of the ‘great debate’), has become its only instrument for settling the social revolt. On the other hand, France cannot afford to lose the lead in global soft power precisely guaranteed by its reputation for being a champion of free speech and human rights, well represented by the young president Emmanuel Macron, worldwide considered as a model of progressive and tolerant leader.

The only way out the government have found from this double bind is to forge and put forward a deceptive, maybe self-delusional, image of themselves, which logically entails prohibiting the dissemination of images of reality.

As Hannah Arendt reminded us, though, ‘facts possess an infuriating stubbornness’. While social injustices imposed by the government’s regressive policies prevail, whether they are filmed or not, whether they are named or not, revolt and repression will continue. What is more, both the rioters and those who repress them will continue to be perfectly aware of the fact that they are victims of that social injustice: whatever image Macron builds of himself, he will never get their consent or support. The fear that the ultra-right will treasure the liberticidal laws that Macron is preparing for himself is sadly becoming more concrete every day.