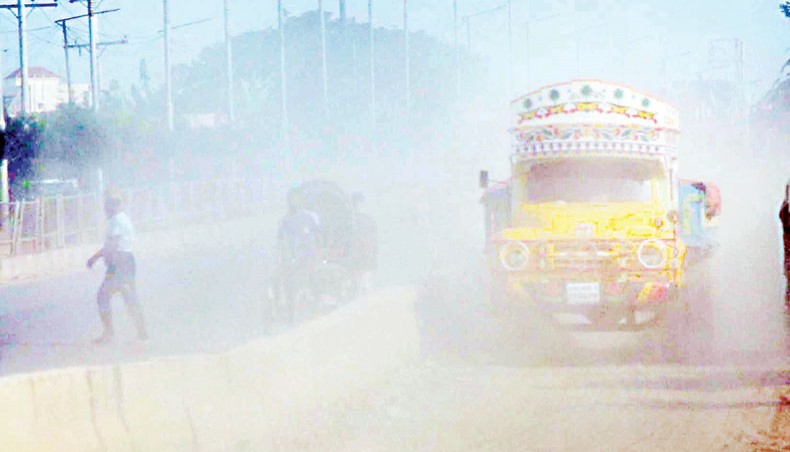 Dust shrouds a portion of the Dhaka-Aricha Highway at Amin Bazar in Dhaka on Monday. — Sony Ramany

The air quality in Dhaka and other cities of the country is worsening as the dry season has started amid the second wave of the coronavirus outbreak that has infected nearly 4.4 lakh people and killed over 6, 400 of them across the country.

Physicians and green activists said that the low-quality air brought about an additional risk of COVID-19 infection for the people having respiratory problems.

He suggested that the government should curb corruption in all sectors related to air pollution.

‘People can catch COVID-19 if they have lung inflammation,’ he said, adding that an increasing number of coronavirus patients indicated that.

Clean air campaigners said that air pollution was gradually intensifying due to the lack of measures by the relevant government agencies, including the Department of Environment, Bangladesh Road Transport Authority, Rajuk, city corporations and other entities.

On Monday, the Department of Environment measured Dhaka Air Quality Index score to be 284, which was very unhealthy and Gazipur score 323 and Rajshahi score 322, which were extremely unhealthy.

DoE air quality monitoring unit director Md Ziaul Haque said that the department was working to curb the air pollution for which it shut down 700 brick kilns across the country last year, adding that it initiated the Bangladesh Clean Air Bill-2019 to stop pollution from construction sites.

‘The government has adopted a policy to phase out clay bricks from government construction by 2025, in which blocks would be used,’ he said.

In case of mandatory use of bricks, only 20 per cent of the kilns would be allowed to operate with modern technology, he said.

According to the DoE, more than 8,000 brick kilns, operate across the country, including 3,000 in and around the capital, excluding those which operate illegally.

‘The DoE is preparing a list of both legal and illegal brick kilns across the country to take action against them under the Brick Manufacturing and Brick Kilns Establishment (Control) Act,’ Ziaul said.

Ahmad Kamruzzaman said that the air pollution in the capital started in the 90s but since 2016 it has become acute, particularly for over eight months a year except June to September and sometime in October.

‘From November to February 65 per cent of the air pollution occurs as major construction work takes place and several thousand brick kilns operate during the time,’ he said.

The Centre for Atmospheric Pollution Studies irregularly measures air quality at 70 locations in the 269 square kilometre area of the capital, home to an estimated 20 million plus people.

In different international studies, Dhaka city, in terms of air quality, was recorded to be among the five most polluted cities, including Karachi, Delhi and Beijing, making the capital of Bangladesh one of the worst liveable cities of the world.

The World Bank Country Environmental Analysis 2018 estimated that around 80,000 deaths and 2.6 million Disability Adjusted Life Years, in short DALYs, were caused in the country by the air pollution, poor availability of water, sanitation and hygiene and other similar factors in 2015.

According to the World Health Organisation definition, DALY is calculated as the sum of the years lost due to disability.

The value of economic welfare impacts due to the mortality was estimated by the report at $6.52 billion in all urban areas of the country while the capital alone accounted for $1.44 billion.

In the winter, patients of respiratory diseases, including pneumonia, asthma, chronic obstructive pulmonary disease, particularly child and aged patients increase due to the air pollution.

He advised that people should drink adequate water, eat fresh fruits, do physical exercise for 30-40 minutes and take influenza vaccine in consultation with physicians to minimise the effects of air pollution.

According to Zafrullah Chowdhury, prompt actions should be taken to tackle the air pollution as it spreads different diseases like cancer and dementia.

He further suggested that the government should stop private car movement for a day each week.

‘Decentralization of government and autonomous agencies in Dhaka also can reduce pollution,’ he said.

He advised the government to select area-based motor garages to check vehicular fitness.

According to the BRTA, the agency has given registration against 44.9 lakh motorised vehicles across the country, including 16 lakh in the capital, where some two crore people live.

According to the World Health Organisation, respiratory diseases are leading causes of death and disability in the world as about 65 million people suffer from chronic obstructive pulmonary disease and three million others die of this complication each year, making COPD the third leading cause of death worldwide.

From November 1, 2019 to March 15, 2020, the government health facilities alone treated 6,22,075 patients with cold-related illnesses, according to the DGHS National Health Emergency Operation Centre and Control Room.