Forgotten lessons on the evil of intervention 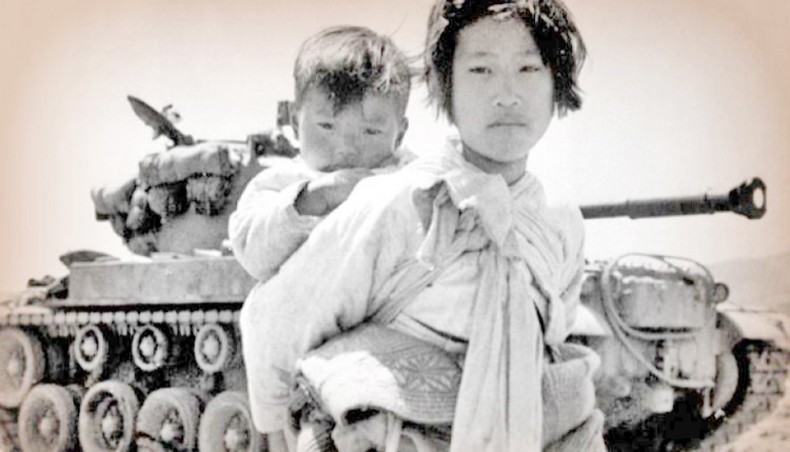 With her brother on her back a war-weary Korean girl passes a stalled M-26 tank in Haengju, Korea on June 9, 1951. — Consortium News/US army/Major RV Spencer

The secrecy and deceit surrounding US war crimes has had catastrophic consequences in this century, writes James Bovard

THIS year is the 70th anniversary of the start of the Korean War, a conflict from which Washington policymakers learned nothing. Almost 40,000 American soldiers died in that conflict, which should have permanently vaccinated the nation against the folly and evil of foreign intervention. Instead, the war was retroactively redefined. As president Barack Obama declared in 2013, ‘That war was no tie. Korea was a victory.’

When politicians or generals appear itching to pull the United States into another foreign war, remember that truth is routinely the first casualty.

The war began with what president Harry Truman claimed was a surprise invasion on June 25, 1950, by the North Korean army across the dividing line with South Korea that was devised after World War II. But the US government had ample warnings of the pending invasion. According to the late Justin Raimondo, founder of antiwar.com, the conflict actually started with a series of attacks by South Korean forces, aided by the US military:

‘From 1945–1948, American forces aided [South Korean president Syngman] Rhee in a killing spree that claimed tens of thousands of victims: the counterinsurgency campaign took a high toll in Kwangju, and on the island of Cheju-do — where as many as 60,000 people were murdered by Rhee’s US-backed forces.’

The North Korean army quickly routed both South Korean and US forces. A complete debacle was averted after general Douglas MacArthur masterminded a landing of US troops at Inchon. After he routed the North Korean forces, MacArthur was determined to continue pushing northward regardless of the danger of provoking a much broader war.

By the time the US forces drove the North Korean army back across the border between the two Koreas, roughly 5,000 American troops had been killed. The Pentagon had plenty of warning that the Chinese would intervene if the US army pushed too close to the Chinese border. But the euphoria that erupted after Inchon blew away all common sense and drowned out the military voices who warned of a catastrophe. One US army colonel responded to a briefing on the Korea situation in Tokyo in 1950 by storming out and declaring, ‘They’re living in a goddamn dream land.’

The Chinese military attack resulted in the longest retreat in the history of the US’s armed forces — a debacle that was valourised by allusion in the 1986 Clint Eastwood movie, Heartbreak Ridge. By 1951, the Korean War had become intensely unpopular in the United States — more unpopular than the Vietnam War ever was. At least the war, which president Harry Truman insisted on mislabelling as a ‘police action,’ destroyed the presidency of the man who launched it. By the time a ceasefire was signed in mid-1953, almost 40,000 Americans had been killed in a conflict that ended with borders similar to those at the start of the war.

PERHAPS the biggest disaster of the Korean War was that intellectuals and foreign-policy experts succeeded in redefining the Korean conflict as an American victory. As Georgetown University professor Derek Leebaert noted in his book Magic and Mayhem, ‘What had been regarded as a bloody stalemate transformed itself in Washington’s eyes; ten years later it had become an example of a successful limited war. Already by the mid-1950s, elite opinion began to surmise that it had been a victory.’ Leebaert explained, ‘Images of victory in Korea shaped the decision to escalate in 1964–1965 helping to explain why America pursued a war of attrition.’

Even worse, the notion that ‘“America has never lost a war” remained part of the national myth, and the notion of having ‘prevailed’ in Korea became a justification for going big in Vietnam.’ But as Leebaert noted, ‘in Vietnam, [the US army] had forgotten everything it had learned about counterinsurgency in Korea as well.’

When the American media noted the 70th anniversary of the start of the war this past June, they paid little or no attention to the war’s dark side. The media ignored perhaps the war’s most important lesson: the US government has almost unlimited sway to hide its own war crimes.

During the Korean War, Americans were deluged with official pronouncements that the US military was taking all possible steps to protect innocent civilians. Because the evils of communism were self-evident, few questions arose about how the United States was thwarting Red aggression. When a US Senate subcommittee appointed in 1953 by senator Joseph McCarthy investigated Korean War atrocities, the committee explicitly declared that ‘war crimes were defined as those acts committed by enemy nations.’

In 1999, 46 years after the cease fire in Korea, the Associated Press exposed a 1950 massacre of Korean refugees at No Gun Ri. US troops drove Koreans out of their village and forced them to remain on a railroad embankment. Beginning on July 25, 1950, the refugees were strafed by US planes and machine guns over the following three days. Hundreds of people, mostly women and children, were killed. The 1999 AP story was widely denounced by American politicians and some media outlets as a slander on American troops.

The Pentagon promised an exhaustive investigation. In January 2001, the Pentagon released a 300-page report purporting to prove that the No Gun Ri killings were merely ‘an unfortunate tragedy’ caused by trigger-happy soldiers frightened by approaching refugees.

President Bill Clinton announced his ‘regret that Korean civilians lost their lives at No Gun Ri.’ In an interview, he was asked why he used ‘regret’ instead of ‘apology.’ He declared, ‘I believe that the people who looked into it could not conclude that there was a deliberate act, decided at a high-enough level in the military hierarchy, to acknowledge that, in effect, the government had participated in something that was terrible.’ Clinton specified that there was no evidence of ‘wrongdoing high-enough in the chain of command in the army to say that, in effect, the government was responsible.’

But the atrocities against civilians had been common knowledge among US troops 50 years earlier. As Charles Hanley, Sang-Hun Choe and Martha Mendoza noted in their 2001 book, The Bridge at No Gun Ri, the Pentagon in 1952 ‘withdrew official endorsement from RKO’s One Minute to Zero, a Korean War movie in which an army colonel played by actor Robert Mitchum orders artillery fire on a column of refugees.’ The Pentagon fretted that ‘this sequence could be utilised for anti-American propaganda’ and banned the film from being shown on US military bases.

In 2005, Sahr Conway-Lanz, a Harvard University doctoral student, discovered a letter in the National Archives from the US ambassador to Korea, John Muccio, sent to assistant secretary of state Dean Rusk on the day the No Gun Ri massacre commenced. Muccio summarised a new policy from a meeting between US military and South Korean officials: ‘If refugees do appear from north of US lines they will receive warning shots, and if they then persist in advancing they will be shot.’ The new policy was radioed to army units around Korea on the morning the No Gun Ri massacre began. The US military feared that North Korean troops might be hiding amidst the refugees. The Pentagon initially claimed that its investigators never saw Muccio’s letter but it was in the specific research file used for its report.

CONWAY-LANZ’S 2006 book Collateral Damage: Americans, Noncombatant Immunity, and Atrocity after World War II quoted an official US navy history of the first six months of the Korean War stating that the policy of strafing civilians was ‘wholly defensible.’ An official army history noted, ‘Eventually, it was decided to shoot anyone who moved at night.’ A report for the aircraft carrier USS Valley Forge justified attacking civilians because the army insisted that ‘groups of more than eight to ten people were to be considered troops, and were to be attacked.’

In 2007, the army recited its original denial: ‘No policy purporting to authorise soldiers to shoot refugees was ever promulgated to soldiers in the field.’ But the Associated Press exposed more dirt from the US archives: ‘More than a dozen documents — in which high-ranking US officers tell troops that refugees are “fair game,” for example, and order them to “shoot all refugees coming across river” — were found by the AP in the investigators’ own archived files after the 2001 inquiry. None of those documents was disclosed in the army’s 300-page public report.’ A former air force pilot told investigators that his plane and three others strafed refugees at the same time of the No Gun Ri massacre; the official report claimed that ‘all pilots interviewed… knew nothing about such orders.’ Evidence also surfaced of massacres like No Gun Ri. On September 1, 1950, the destroyer USS DeHaven, at the army’s insistence, ‘fired on a seaside refugee encampment at Pohang, South Korea. Survivors say 100 to 200 people were killed.’

Slaughtering civilians en masse became routine procedure after the Chinese army intervened in the Korean War in late 1950. MacArthur spoke of turning North Korean-held territory into a ‘desert.’ The US military eventually ‘expanded its definition of a military target to any structure that could shelter enemy troops or supplies.’ General Curtis LeMay summarised the achievements: ‘We burned down every town in North Korea… and some in South Korea, too.’ A million civilians may have been killed during the war. A South Korean government Truth and Reconciliation Commission uncovered many previously unreported atrocities and concluded that ‘American troops killed groups of South Korean civilians on 138 separate occasions during the Korean War,’ The New York Times reported.

Truth delayed is truth defused. The Pentagon strategy on Korean War atrocities succeeded because it left facts to the historians, not the policymakers. The truth about No Gun Ri finally slipped out — 10 presidencies later. Even more damaging, the rules of engagement for killing Korean civilians were covered up for four more US wars. If US policy for slaying Korean refugees had been exposed during that war, it might have curtailed similar killings in Vietnam (many of which were not revealed until decades after the war).

The same shenanigans permeate other US wars. The secrecy and deceit surrounding US warring has had catastrophic consequences in this century. The Bush administration exploited the 9/11 attacks to justify attacking Iraq in 2003, and it was not until 2016 that the US government revealed documents exposing the Saudi government’s role in financing the 9/11 hijackers (15 of 19 were Saudi citizens). The Pentagon covered up the vast majority of US killings of Iraqi civilians until Bradley Manning and WikiLeaks exposed them in 2010. There are very likely reams of evidence of duplicity and intentional slaughter of civilians in US government files on its endlessly confused and contradictory Syrian intervention.

When politicians or generals appear to be itching to pull the United States into another foreign war, remember that truth is routinely the first casualty. It is naive to expect a government that recklessly slays masses of civilians to honestly investigate itself and announce its guilt to the world. Self-government is a mirage if Americans do not receive enough information to judge killings committed in their name.

Consortiumnews.com, November 20. James Bovard, a USA Today columnist, is a policy adviser to the Future of Freedom Foundation.