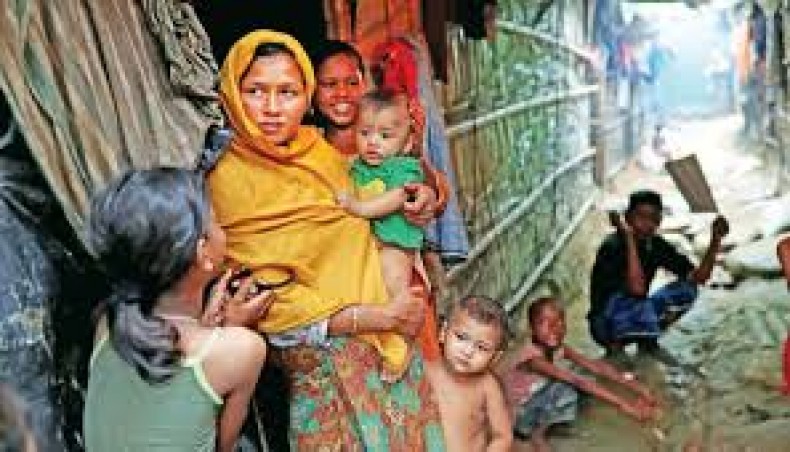 Rohingya refugees are seen outside of their makeshift tent in the Kutupalong camp in Cox’s Bazar on Friday. — Reuters photo

The Bangladesh side described it as ‘a major achievement’ while experts believe that there is little significance of the resolution.

Cambodia, Laos, Vietnam, Philippines, Belarus, Zimbabwe and Myanmar also voted against the resolution which was adopted with support from 131 member-countries at the 75th session of the Third Committee of the global body.

The 31 countries that did not back the resolution also include Bhutan, Nepal, Sri Lanka, Singapore, Thailand, Kenya and Zimbabwe, according to UN documents.

Bangladesh permanent representative to the UN in New York headquarters Rabab Fatima described the adoption as ‘a very strong mandate’.

‘The adoption of the resolution was a major achievement given its timing and constraints of the pandemic situation,’ she told New Age.

However, former foreign secretary Touhid Hossain said that the adoption of this resolution brought no substantive progress as the voting took place following an old pattern as China and Russia opposed identical resolutions in the past too.

‘This pattern may continue unless any broad engagement is made,’ he told New Age over phone.

Foreign minister AK Abdul Momen has recently said that the government was in a process of engaging China, India, Japan, Australia and ASEAN countries for a permanent solution to the Rohingya crisis with sending them back to Rakhine of Myanmar.

Australia and only three of the 10 ASEAN member countries — Brunei, Indonesia and Malaysia — supported the resolution, UN documents show.

Member-states of the OIC and the EU co-tabled the resolution that received sponsorship from 104 member-states, demonstrating strong and unified support in favour of the persecuted Rohingya Muslims and other minorities, who continue to suffer from human rights violations in Myanmar, the Bangladesh permanent mission at the UN headquarters said in a press release.

The resolution asked  Myanmar to take specific actions, including granting the minority Rohingya people citizenship, ensuring safe and sustainable return of the Rohingyas to their homes by creating a conducive environment, including through confidence-building measures such as addressing justice and accountability.

They hoped that the resolution would help address the longstanding plight of the Rohingya Muslims and other minorities by ensuring their basic human rights to return to their homes in safety, security and dignity, and would also help Myanmar overcome the challenges it faces in its democratic transition.

They called on Myanmar to take urgent actions to address the citizenship issue of the Rohingya minorities.

Two attempts for launching the repatriation of Rohingya people failed in 2019 as not a single member of the community showed up  to return to Rakhine citing absence of conducive environment and unwillingness of the military-controlled Myanmar to address the root causes of their forced displacement from the country.

Some 8,60,000 Rohingyas, mostly women, children and aged people, entered Bangladesh fleeing unbridled murder, arson and rape during ‘security operations’ by the Myanmar military in Rakhine, what the United Nations denounced as ethnic cleansing and genocide, beginning from August 25, 2017.

The latest Rohingya influx has taken the number of undocumented Myanmar nationals and registered refugees from that country in Bangladesh to over 1.1 million, according to estimates by UN agencies and Bangladesh foreign ministry.

A lawsuit is pending with the International Court of Justice at The Hague on the allegations that the military-controlled Myanmar government was responsible for genocide against the minority Rohingya people.

Bangladesh would continue to seek a peaceful solution to this crisis with safe and dignified return of the Rohingya people to Myanmar, Rabab Fatima added.