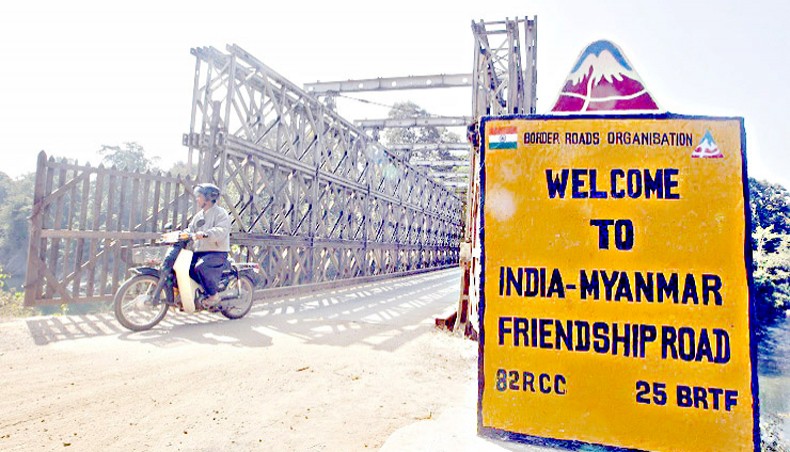 CHINESE Belt and Road Initiative, a global transport and economic project, is well known worldwide. While some countries endorse it, many others consider it a form of Chinese expansion designed to subordinate the economies of other countries to China. India, for one, shares this opinion towards the initiative. In order to minimise China’s influence on neighbouring countries, including its long-standing economic and political partners, India is now forced to propose an alternative to the BRI in the form of its own international transport routes and beneficial trade agreements. In addition to opposing the BRI and China, this is also required to develop India’s economy.

India is known for its poor geographical location for trade with its neighbouring countries, given the Himalayan Mountains stretching along the entire north side of the country. On the one hand, they create a barrier between India and China, whose relationships can hardly be considered free of issues. On the other hand, India’s trade relations are primarily represented by countries that can be reached over the sea (the USA being the main trade partner for 2019–2020, for example). Countries that border India overland, with the exception of the hostile Pakistan and China, are Nepal, Bhutan, Myanmar, Bangladesh and Afghanistan, all of which have relatively poor purchasing power. The economy of the landlocked northern Indian states is particularly affected by this situation. And generally, it is difficult to realise the full trade potential of such a huge country by means of sea transport alone.

In order to overcome the geographical limitations, India decided to establish overland trade routes to the east, Myanmar, for instance, so as to gain access to the countries of the Indochinese Peninsula through it, and afterwards to the entire Southeast Asia. As a result, a strategy of foreign policy called Look East was formed, whose main goal is to expand economic and political cooperation between India and the nations of Southeast Asia. Naturally, this cooperation was supposed to be based on developing trade routes. It should be noted that this development, among other things, was aimed at strengthening communication between India and Singapore, which is ranked among the most economically developed countries not only in Southeast Asia, but also worldwide. India officially launched the Look East policy in 1991.

According to popular belief, the key purpose of the Look East policy was to develop a partnership with the USA: allegedly, the US, already preoccupied with restraining the rapidly developing China at that time, sought to create its own axis of influence, running from US allied India to Southeast Asia, where at that time at least Thailand and Philippines were already among the US partners. Indeed, from the perspective of Indian-American interaction, Look East has proved to be greatly beneficial, but it is hard to say whether this immediate benefit was more important for India than the fact of developing cooperation, including trade, with countries sharing land borders with it. In the end, an alliance that includes India and countries of the Association of Southeast Asian Nations, in terms of both population and economic strength, is quite capable of competing with both China and the United States. It is also quite clear that India will play the key role in this association, and this fits perfectly in line with its economic, political, geopolitical and other objectives. As for the ASEAN countries, it is also very profitable for them to have such a strong ally as India in the face of the ever increasing power of China. Additionally, just like India, they needed to develop their economic relations and trade routes, and India was a very important area for them in this regard.

Generally, both sides were interested in cooperation, and from 1993 to 2003 the trade turnover between India and ASEAN increased from $2.9 billion to $12.1 billion. The most economically developed countries of this region — Malaysia, Singapore and Thailand — became India’s main trading partners in Southeast Asia.

In August 2009, despite opposition from some experts who believed that the trade balance would not benefit India, an agreement on a Free Trade Area between India and ASEAN countries was signed and became effective in early 2010.

In 2018, the volume of mutual trade turnover between India and ASEAN reached $81.3 billion, primarily composed of Indian imports from ASEAN.

However, a mutually beneficial trade between distant regions, apart from wise agreements, also requires basic physical support, such as convenient and reliable transportation routes. An important part of the Look East policy was creating a modern and extensive highway connecting India with countries of Southeast Asia.

It started in 2001 with the project of India-Myanmar Friendship Road. The starting point of the route was chosen to be the city of Moreh on the border between India and Myanmar. Over time, the project evolved and the newly constructed road extended to the Thai city of Masot on the Thai-Myanmar border. The road between Moreh and Masot has become the Myanmar part of the highway, which connected Impal, the capital of the northern Indian state of Manipur, Neipyido, the capital of Myanmar, and Bangkok, the capital of Thailand. At present time the road is almost finished, with some sections already being reconstructed. Now the project is known as the India-Myanmar-Thailand Trilateral Highway. However, following the Look East policy, the Indian side proposed to extend and branch the highway to Cambodia, Laos and Vietnam by connecting it to the East-West Economic Corridor running from Thailand through Cambodia to Vietnam.

Nowadays, the project is often talked about in the plural form: India-Myanmar-Thailand Trilateral Highways, as the road is constantly branching off.

The construction was and continues to be carried out under considerable difficulties: among other things, the Indian party had to take upon itself the reconstruction of 69 Myanmar bridges. India has already invested tens of billions of dollars in this project. Nevertheless, New Delhi, Neypyido, Bangkok and other regional capitals expect a great return in the near future. It is hard to say whether the ongoing road network project will be able to compete with a vast variety of similar planned objects within the Belt and Road Initiative, but according to the project participants, implementing it will give a significant boost to trade and other forms of economic cooperation both within the ASEAN-Indian Free Trade Zone and throughout Southeast Asia.