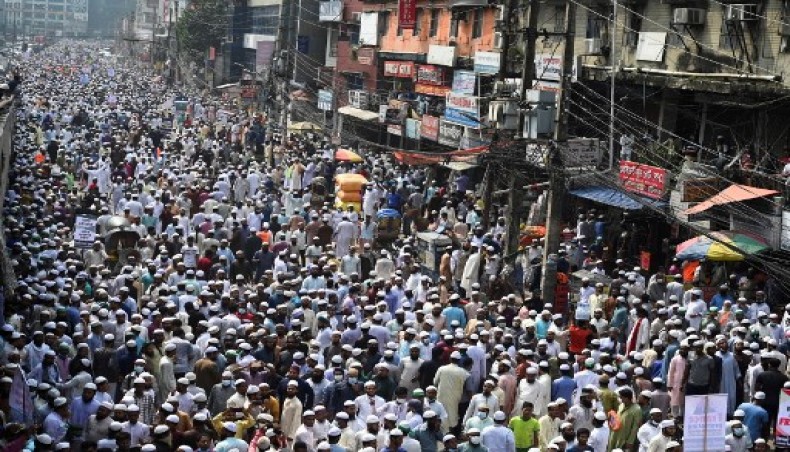 Activists and supporters of the Islami Andolon Bangladesh, a Islamist political party, hold a protest march calling for the boycott of French products and denouncing French president Emmanuel Macron for his comments over Prophet Mohammed caricatures, in Dhaka on October 27, 2020.-AFP photo

Thousands of supporters of Islami Andolon Bangladesh held a demonstration in the capital on Tuesday protesting at French president Emmanuel Macron’s recent criticism of Islam.

Macron spoke out after a Chechen extremist beheaded a French teacher near Paris after he had shown cartoons of the Prophet during a class he was leading on free speech.

Atiqur Rahman, a spokesman of the party, said the protest began at the north gate of the national mosque Baitul Mukarram in the morning.

The protesters demanded an unconditional apology from the French president and the ouster of French ambassador from Bangladesh.

The protesters marched towards the French Embassy after their demonstration.

Police barricaded the protesters near Shantinagar Crossing, where they held a gathering before ending their programme.

Islami Andolon Bangladesh leader Atiqur said they ended the protest by announcing more demonstration on Thursday and demonstration in all mosques across the country on Friday.