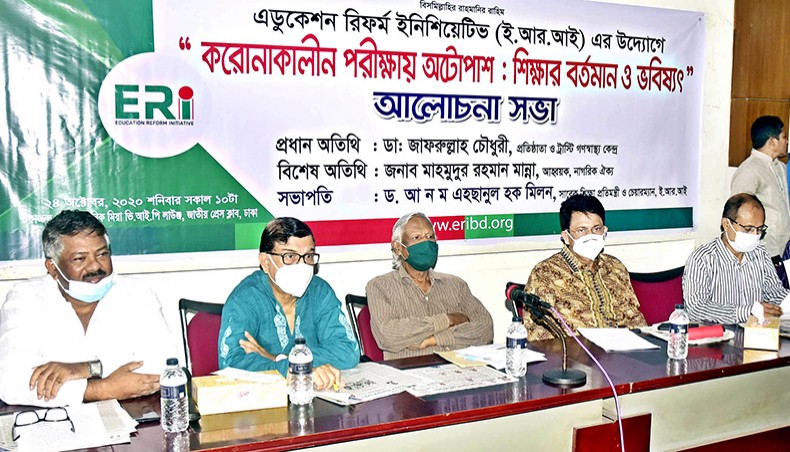 Guests attend a discussion on ‘Auto-Pass in the Exams during Corona and the Present and Future of Education’ organised by Education Reform Initiative at the National Press Club on Saturday. — New Age photo

The government’s decision to give auto-pass to candidates of Higher Secondary Certificate and equivalent examinations based on their secondary school certificate and junior schools certificate results would have adverse impacts on their lives in future and the education system.

Discussants at a roundtable organised on Saturday by Education Reform Initiative said that students who would get auto-pass would face criticism throughout their lives and would face problems while taking admissions at higher educational institutions as brilliant and average students would get similar grades.

They said that usually, around 70,000 students got GPA5 in HSC exams and the total number of seats in higher education institutions in the country was 64,182.

The government will not be able to do justice to the students who changed their groups after passing the SSC and to irregular students who failed last year in one or more subjects, they said.

‘The government should have taken the HSC exams maintaining the health guidelines and increasing the number of centres as it opened all other sectors,’ Gonoshasthaya Kendra founder Zafrullah Chowdhury said.

‘But, the government was not opening the educational institutions not just because of the health safety issue but in fear of student movements amid so many injustices, rapes and other problems,’ said Zafrullah.

In his speech as the chief guest, Zafrullah also said that the government took the decision of giving auto-pass in the HSC as it had won the national elections without the votes of the citizens.

He said that not only the ruling party Awami League, but all major political parties like the Bangladesh Nationalist Party, the Communist Party of Bangladesh and Gano Forum leaderships preferred to secure their positions without contests or examinations but through the ‘auto-pass’ system, which destroyed the democratic organs.

Nagarik Oikya convenor Mahmudur Rahman Manna expressed his surprise at seeing no protests from the students at the government’s decision of giving auto-pass.

‘This has happened as everybody wants benefits without efforts. The trend is very common, even in the political parties, for which the whole nation is suffering from the rule of an autocratic party that assumed power without fair elections,’ Manna said.

BNP organising secretary Ruhul Quddus Talukder Dulu said that the dedicated workers in his party did not get their due positions in the party.

‘Some leaders who are very active on Facebook campaigns are getting importance in the party for which BNP is unable to play an effective role despite its huge popularity,’ he said.

Education Reform Initiative chairman and former state minister for education ANM Ehsanul Haque Milan said that the government had no right to destroy the future generation by giving them auto-passes and auto-promotions.

‘There must be assessment systems for evaluating the talents of the students,’ Milan said.