Govt embarks on tuna mission in Bay of Bengal 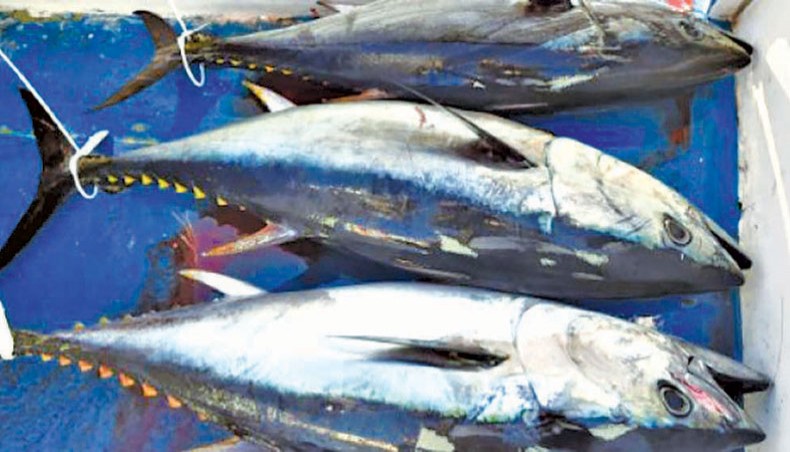 Failing to woo the private sector, the government has taken a project to catch costly and migratory tuna fish as the country eyes to make a debut in deep-water fishing in the Bay of Bengal. — AFP photo

Failing to woo the private sector, the government has taken a project to catch costly and migratory tuna fish as the country eyes to make a debut in deep-water fishing in the Bay of Bengal.

Under the project worth Tk 61.06 crore, three long liners will be procured by the Department of Fisheries to catch tuna and pelagic fish in the exclusive economic zone in the bay located 200 nautical miles away off the shore.

The experimental project scheduled to be concluded in 2023 also aims at building expertise with the aid of overseas training in tuna fishing and encouraging the tentative private sector to get involved in the muchneeded venture.

Marine Fisheries Office director in Chattogram Md Latifur Rahman explained the necessity of tuna fishing while taking to New Age a week after the Executive Committee of the National Economic Council approved the project titled ‘Exploring Tuna and Pelagic Fishes from the Deep Sea in the Bay of Bengal’ on August 18.

In 2015, Bangladesh became a member of the Indian Ocean Tuna Commission, an inter-governmental organisation responsible for management, conservation and appropriate utilisation of tuna and tune-like fish, he said.

As a member of the Indian Ocean Tuna Commission, the country has to provide information on tuna stocks in its water boundary.

‘Without catching tuna, you cannot know about the tuna stock,’ said Latifur.

He suspected that the county’s membership in the 31member group, also connected with the UN Council of the Food and Agriculture Organisation, would become redundant in future without research about the most expensive fish in the oceans.

According to a Reuters report run from Tokyo on January 5, 2019, a bluefin tuna was auctioned at $3 million, almost double the previous record price fetched in 2013. The 278-kg fish was caught off the coast of northern Japan.

There are at least six other types of tuna, including yellowfin, albacore, bigeye, skipjack, available in deep sea with the size of the global tuna market reaching $11.38 billion in 2017.

According to the ResearchAndMarkets.com, the global market of tuna enjoyed worldwide fresh cooked, frozen, canned and in sushi is expected to be worth $13.75 billion by 2023.

The local fisheries department officials are sure about the presence of all types of tuna, including the prized bluefin, in the country’s deep sea as neighbours India, Sri Lanka and Maldives catch tuna.

In 2019, Maldives’ total export stood at $361 million and 95 per cent of it came from the export of fish with skipjack tuna accounting for 29 per cent of it, followed by frozen yellowfin tuna at 27 per cent and canned tuna at 23 per cent.

But local salt water fishermen based mainly in Chattogram and Khulna hardly venture deep in the bay due to a lack of expertise in the area, although fishermen in India and Sri Lanka are often found to be intruding in each other’s maritime territories for the prized catches.

Planning minister MA Mannan said that the government was forced to take the project as the private sector businesses had not responded to repeated calls from the government to catch tuna in the bay.

The country settled its maritime boundary row with Myanmar in 2012 and with India in 2014, establishing its rights over living and non-living resources within 200 nautical miles of the EEZ.

The Department of Fisheries has made at least half a dozen attempts to send private sector fishermen to the deep sea where only tuna and other pelagic fish are available.

But the attempts were fruitless, said Mannan.

Bangladesh Marine Fisheries Boat Owners Association secretary Aminul Haq Babul Sarker said that there were many reasons why local fishing companies did not try tuna fishing despite the fact that the fisheries department at one point wanted to supply vessels.

He said that the vessels used for tuna fishing were completely different and bigger in size from the wooden trawlers used by Chattogram-based fishermen, who were mainly engaged in hilsa catching within 100 kilometres of the sea known as the continental shelf.

The expertise needed in catching tuna was also completely different, he said.

But the most discouraging fact that caused the local fishing community to shy away from tuna fishing was the need for huge investment.

First of all, the fishing boats need to cross double the distance in sea from what they usually are used to covering now to reach the deep water where tuna is available.

Second, the amount of fuel and other materials needed for the fishermen on board will also double.

The fishermen assessed that they would incur losses if they failed to catch the expected amount of tuna.

At present, a wooden trawler with 50 fishermen on board on a trip of 26-days within 100 kilometres in the bay costs Tk 80-90 lakh and is arranged from bank loans, said Aminul Haq.

He informed that not a single bank branch at Parthargatha in Chattogram had agreed to bankroll the tuna venture by private companies.

According to the fisheries department officials, an interested private company contacted a Chinese fishing company to establish a joint venture initiative.

But the Chinese firm rejected the proposal since tuna is not found all year round as it keeps travelling from sea to sea.

But the stock of bluefin tuna has suffered a catastrophic decline of more than 96 per cent in the Northern Pacific Ocean with the advent of industrial fishing methods.

Bangladesh is also suffering from over-fishing in shallow water in the bay which has forced the government to impose a 65-day ban every year since 2019 to boost the depleted fish stocks.

The ban which lasts from May 20 to July 23 is timed to coincide with the breeding season.

According to the fisheries department, 42.76 lakh tonnes of fish were produced in the 2017-18 fiscal, of which 16 per cent was netted from the bay by around 270 trawlers.