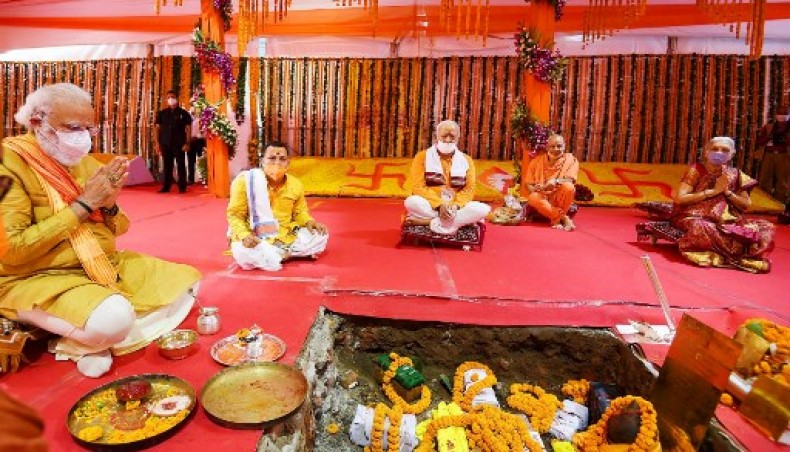 In this handout photograph taken on August 5, 2020, and released by the Indian Press Information Bureau India's prime minister Narendra Modi (L) performs a religious ritual during the groundbreaking ceremony of a grand Hindu temple in Ayodhya.- AFP photo

The head of Ram Temple trust in Ayodhya, who shared stage with India prime minister Narendra Modi and several other VIPs during the groundbreaking ceremony for a Ram Temple last week, has tested positive for coronavirus, reports NDTV.

Mahant Nritya Gopal Das, 82, was among the five people on the stage at the grand ceremony at Ayodhya in Uttar Pradesh on August 5.

The others on the stage were Uttar Pradesh chief minister Yogi Adityanath, governor Anandiben Patel and Mohan Bhagwat, chief of the Rashtriya Swayamsevak Sangh, the BJP's ideological mentor.

‘We were informed that Maharaj-ji has some fever, so we sent a team of doctors and they investigated and gave medicines . The fever is normal. He has mild breathlessness and we checked his oxygen level. It is saturated. There is nothing serious. We checked for coronavirus, did antigen test and there is positivity,’ Sarvagya Ram Mishra, District Magistrate of Mathura, told reporters on Thursday.

He added that the process to identify those who had come in contact with Das in the recent past has started.

Modi laid the first brick for the Ram Temple at Ayodhya at the mega ceremony last Wednesday. He returned to the holy city after 29 years to participate in the ‘Bhoomi Pujan’ or the groundbreaking ceremony for the temple, which meets a core promise of the ruling BJP.

Days before the ceremony, a priest, Pradeep Das, and 14 policemen on duty in the Ram Janambhoomi complex had also tested positive for coronavirus.