Disparity widens in Bangladesh as per capita income goes up 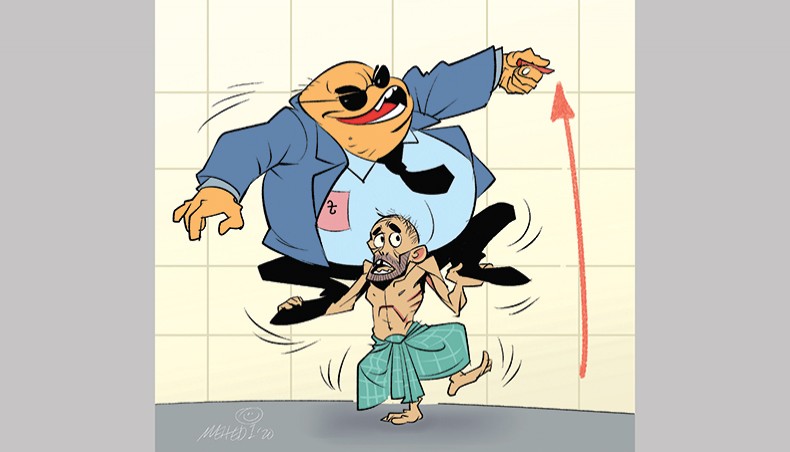 The BBS on Monday in its compilation of the provisional data on the gross domestic product growth said that the per capita income increased by $155 in the just-concluded FY20 with the GDP growth rate at 5.24 per cent.

Experts and economists, however, observed that the per capita income doubled in last eight years without the rising inequality addressed, the major concern accompanying the country’s economic growth.

The per capita income grew several times from $330 in 1994–95 while the disparity between the rich and the poor widened as the rich became richer and the poor poorer over time amid an unequal distribution of growth.

The country’s inequality situation has been further exacerbated as a large portion of the country’s population has experienced income and job losses and became poor due to the COVID-19 fallout.

Experts said that the lion’s share of the increased per capita income went to the rich group of society as the poor and middle-income people felt the biggest shock of the coronavirus outbreak due to the shutdown and restricted economic activities during the last quarter (April-June) of the fiscal year.

The higher GDP growth could not minimise the income inequality which now stands near the danger point.

Gini coefficient, used to measure a country’s income distribution, was 0.48 in 2016, just .02 points away from the danger mark of .50, experts said.

According to a study of the Centre for Policy Dialogue, the income inequality may increase to 0.52 within this year.

CPD distinguished fellow Mustafizur Rahaman on Tuesday told New Age that the per capita income increased due to the increase in GDP growth the estimation of which was under question.

The rise in per capita income will exacerbate the existing disparity between the rich and the poor without a proper distribution of the GDP gain, he said.

The government should take steps to ensure a fairer distribution of income by expanding the social safety net programmes, increasing tax on the rich and providing decent jobs to people, he added.

The state-run Bangladesh Institute of Development Studies also estimated that about 1.64 crore people already became new poor in the country due the ongoing COVID-19 pandemic.

SANEM executive director Selim Raihan said that the rate of inequality usually increased in situations like coronavirus outbreak in any country.

The per capita income increased at a time when a huge number of people fell below the poverty line, lost their income and were forced to return to villages and surviving on their savings, he said.

In is evident that income has increased for rich people though they have also been affected by the outbreak, he added.

It seems that the BBS has estimated the GDP growth and the per capita income based on its pre-determined framework, he observed.

Former World Bank Dhaka office lead economist Zahid Hussain declined to comment on the rise of per capita income saying that the estimate was arrived at based on the GDP growth rate, the reliability of which was under serious question.

It is clear that which groups have had increased income when most of the small traders, informal sector employees, urban poor and middle-income groups have experienced income fall, he said.

There is no debate about the rising inequality in the country as there has been the trend since 2010.

Power and Participation Research Centre (PPRC) executive chairman Hossain Zillur Rahman said that the level of development could not be understood with only the growth in GDP and per capita income when inequality was rising in the country.

Disparity between the rich and the poor should be removed by improving the quality of employment, education, health and the living standard of people, he said.

There is no recent study on inequality but the CPD in a 2019 report showed that inequality in terms of income, consumption and wealth was rising in the country.