US Withdrawal from Afghanistan 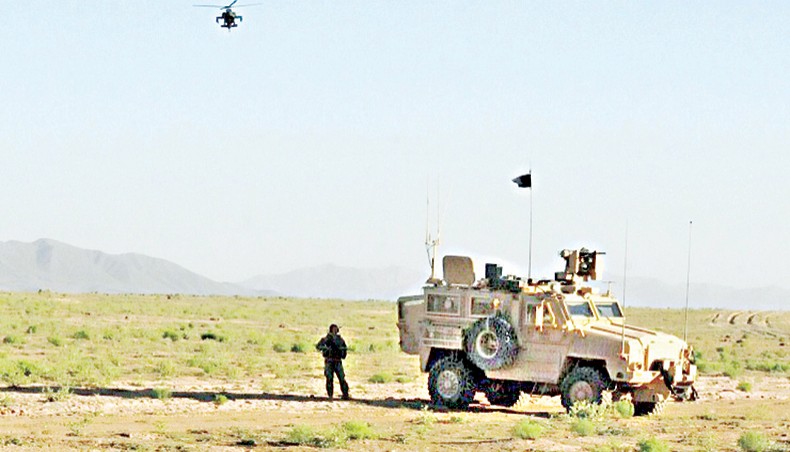 IT IS widely acknowledged that from a geopolitical point of view, India is caught between a rock and a hard place. It shares its land borders with China, its most powerful competitor in Asia, as well as Pakistan, and although Pakistan may not be as powerful as China, it is a country with which India has an extremely complex relationship. In addition to these two neighbours, India is surrounded by smaller states with underdeveloped economies, including Nepal, Bangladesh and Sri Lanka, where China is constantly trying to increase its influence, attempting to close in on India. This means that India has to devote a great deal of attention to its neighbours in the interests of its domestic security.

One of the states that India has to focus much of its attention on is the Islamic Republic of Afghanistan. Various illegal armed groups have been operating in Afghanistan since the civil war began in 1979, including groups with links to the dark underground of global Islamist terrorism. Some have taken advantage of the lawlessness that prevails across large swathes of Afghan territory, and have turned the country into a springboard to launch operations in other countries. This is also a threat for India. Its long-standing conflicts with the Islamic Republic of Pakistan as well as conflicts between Muslims and Hindus within India itself that go back even further make India a target for Islamist terrorist groups. One of the best ways to combat terrorism is by supporting the socio-economic development of the countries that serve as a springboard for terrorism and a terrorist labour market for recruiting new fighters. Therefore, India has to devote a great deal of attention to Afghanistan’s problems for the sake of its own security, and provide assistance to Afghan citizens and the democratically elected government.

Between 1978 and 1992, India supported the pro-Soviet government of the Democratic Republic of Afghanistan and its fight against the Islamist Mujahideen fighters.

One of the many projects India has implemented in Afghanistan which is worth mentioning is the Afghan-India Friendship Dam on the Hari River in Herat Province. Originally the Salma Dam, the hydroelectric facility which serves as a power plant and also provides irrigation for the country cost India $300 million, and was renamed the Afghan-India Friendship Dam. India also built the Chimtala power plant in the Afghan capital of Kabul, donated several hundred buses to the city, and contributed to the modernisation of communications systems, etc.

Although the Indian and Afghan governments engage in active cooperation and share the common interest of peace in Afghanistan, the future of relations between the two countries now looks uncertain.

The trouble is that despite almost 20 years of war in Afghanistan, the US has never been able to fully defeat the Afghan terrorists, especially the Taliban, who still remain one of the most powerful forces in the country, supported by a substantial proportion of the population, and they control large swathes of the country. After paying for this escapade with the deaths of thousands of civilians and having lost trillions of dollars in this war, the US decided to withdraw its troops from Afghanistan, leaving the Afghan government and neighbouring countries on their own to pick up the pieces and deal with the Taliban themselves. If the Afghan authorities failed to defeat the Taliban by force, even with the support of NATO troops, their chances of defeating the Taliban in a military confrontation will be even lower once the Americans have pulled out. The negotiation table is all they have left in their arsenal.

Back when the US and its allies were still prepared to continue the war, the international community categorically perceived the Taliban as a terrorist group which must be fought, yet the opinion has been expressed more and more frequently in the media over the past few years that given this organisation is supported by a huge number of Afghan citizens, it should be considered a political force worthy of recognition and welcome to participate in negotiations. It seems advocates of this view are even willing to turn a blind eye to the fact that the Taliban’s activities and ideology are hardly compatible with modern concepts of human rights, and the fact that it has many crimes against humanity to answer for.

In February 2017, Afghan president Ashraf Ghani Ahmadzai announced that the Afghan government is prepared to acknowledge the Taliban as a political party, and allow them to take part in elections. Given that the current government would not be what it is today had American troops not influenced its formation, president Ghani could hardly have made this statement without running it by Washington for approval in advance. In January 2019, the US was the country that initiated negotiations with the Taliban. These talks continued throughout the year. The culmination of these talks was on February 29, 2020, when the United States and the Taliban signed an agreement on the withdrawal of American troops from Afghanistan in exchange for the Taliban ceasing its terrorist activities and its fighting against the Afghan authorities.

On the face of it, this appeared to be a step towards a long-awaited peace. In practice however, agreements are only honoured when both parties have enough power to punish each other for failing to honour their commitments. The US does not appear to have much weight in its negotiations with the Taliban. With the world’s wealthiest army, the United States fought against illegal armed groups for almost 20 years in Afghanistan, and never achieved its goals. America’s talks with the Taliban now look like less of an attempt to achieve what they had gone into Afghanistan for through diplomatic means, but more of an attempt to leave Afghanistan with as little shame as possible. The Taliban have carried out multiple terrorist attacks since the agreement was signed that have killed hundreds of Afghan citizens. However, the US began withdrawing its troops in March 2020, pretending it had not noticed what was going on.

Once the Americans have left, the question of whether the Taliban will honour their side of the agreement — to end terrorist activities and begin a peaceful integration into Afghan political life — will depend on the Taliban themselves. The Afghan military will not have the capacity to force them to do so. The Taliban may uphold their guarantees. Given the amount of support they have among the Afghan population, the Taliban could also rise to power through peaceful and democratic means in Afghanistan. However, another possible scenario, where the Taliban overthrow the Afghan government, seize power by force, and turn Afghanistan into a global Islamist stronghold once the American troops have been withdrawn, is one that cannot be ruled out.

Neither of these scenarios would be desirable for India. As has already been mentioned, relations between India and Pakistan are particularity complex. Not only that, but terrorist groups associated with the Taliban or part of it operate on Pakistani territory. These groups control areas of Pakistan bordering Afghanistan, it is where the Afghan Taliban receive their supplies and recruits from, and they use these areas as a safe haven when necessary. According to some reports, senior Pakistani officials have acted as patrons, sponsoring the Pakistani Taliban and their allies.

You could say that during the fighting with American and Afghan troops, Pakistan was like a backdoor for the Afghan Taliban. If the Taliban does eventually seize power in Afghanistan, it may then become the backdoor for the Pakistani Islamists, and their main front line could be in Kashmir, a disputed region between India and Pakistan, over which three Indo-Pakistani wars have been fought. In addition to the Pakistani troops themselves, there are also a number of Islamist terrorist groups in Kashmir that have been plotting attacks against India for several decades. Many of their fighters come from Afghanistan. It is very likely that there is a link between Pakistani terrorists in Kashmir and the Afghan Taliban, and the strengthening of the Taliban’s position in Afghanistan is likely to lead to an increase in terrorist activity in India.

It should not be forgotten that India is America’s most important regional partner, who America needs to work together with to constrain China, which is strengthening its position in the Indo-Pacific. Given the troubles that India might be left with once the US armed forces have pulled out of Afghanistan and as a result of the agreement America concluded with the Taliban, one might expect to see a noticeable deterioration in Indo-American relations. However, this has not been seen. On the contrary, US president Donald Trump paid a visit to India in February 2020, just a few days before the American agreement with the Taliban was signed. During a joint press conference, the American president and his Indian counterpart Narendra Modi said that they intend to increase the level of cooperation between their countries and develop a Comprehensive Global Strategic Partnership. Perhaps America’s withdrawal from Afghanistan was precisely what forced India to move towards a closer cooperation with the United States, and in fear of the growing threat of terrorism, New Delhi decided to enlist American military support. This could be seen as a success for the United States. After losing Afghanistan, America is strengthening its influence in India and thus its position in the fight against China. The ability to capitalise on everything, even defeat, is an essential quality in politics, and Washington seems to adhere to this principle.

It is even conceivable that the US could have kept troops deployed in Afghanistan for many more years, but took the deliberate decision to hand over the country to the Taliban in order to gain an advantage in the fight against China. After all, the confrontation with China has become a key issue in American foreign policy over recent years, which could even prompt America to put their interests in the Muslim world on the back burner. It is also worth remembering that if the Taliban does strengthen its position in Afghanistan, this may not only lead to an increase in terrorist activity in India, but could also trigger an increase in the turbulent Muslim-majority Xinjiang Uighur Autonomous Region in China, where an Islamist sentiment could take hold. However, let’s not forget that without proof, this is just an interesting theory. This would be excessive opportunism, even for Washington.