Fighting over Kashmir could blow up planet 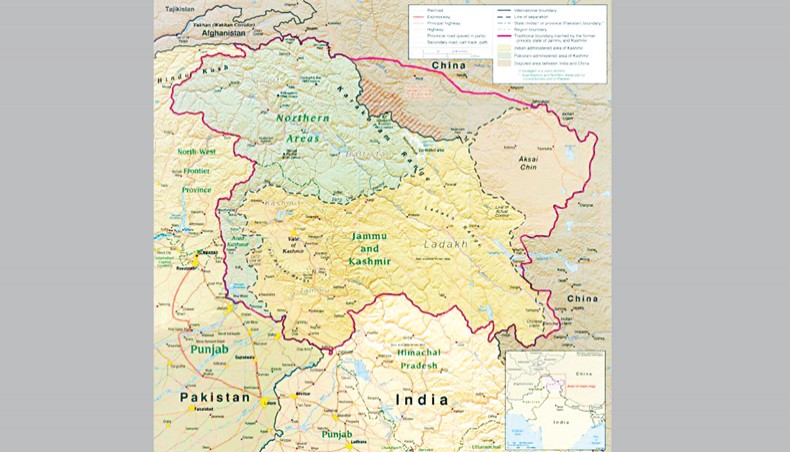 JAMMU and Kashmir, widely referred to as Kashmir, has had many designations since India and Pakistan were partitioned by Britain and gained their respective independence from the empire: a princely state, a state, a union territory. The 86,000 mile, Muslim-majority region sits in the Himalayas on the border with China. It is of strategic significance to both India and Pakistan, primarily because of the Siachen Glacier which brings freshwater the drought-ridden nations. India and Pakistan have nuclear weapons: armaments of such destruction that even a ‘minor’ regional war would cause more than a decade of global nuclear winter.

Both countries have already fought several times over Kashmir. With India going down the route of Hindu fanaticism and Pakistan gripped by Islamism, both nations compound their irrationalities with a different form of religious extremism exported from the west, namely neoliberal economics. The chances of global survival diminish. The question is what we in the West can do to pressure our governments to de-escalate the conflict and cease exacerbating it.

THE princely state of Kashmir was ruled by a Hindu Maharaja, Hari Singh. Following independence from Britain in 1947, Pakistani fighters invaded Kashmir. Singh signed the Instrument of Accession to India, igniting war between India and Pakistan, which lasted for two years. Two-thirds of Kashmir fell under Indian control. Both states violated UN Security Council Resolution 47: India refused to hold an election, which would have allowed the Muslim-majority population to decide their future, and Pakistan never withdrew its troops. India subsequently opposed UN involvement in the dispute.

In 1965, Pakistan infiltrated troops into the Indian zones in an apparent effort to incite a counter-India insurgency. Around 6,000 people were killed during the 17-day Indian counter-offensive. The war ended with the so-called Line of Control, created by the Simla Agreement of 1972, which followed another conflict in Kashmir and basically existed until India’s annexation of Kashmir in 2019. Following a growing independence movement among Kashmiris, India passed the Jammu and Kashmir Public Safety Act 1978, which led to the disappearances of around 8,000 Kashmiris and the indefinite detention of hundreds more.

In a repeat of 1965, India tried to seize the high ground of Kargil in 1999. A few years later, two Kashmiri groups based in Pakistan, Lashkar-e-Taiba and Jaish-e-Mohammad, attacked the Indian Parliament, nearly triggering war. A so-called Composite Dialogue was established, seeking to bring the more moderate independence groups into negotiations. This led to a ceasefire.

In 2007, a bilateral peace plan was nearly finalised, but collapsed due to Pakistan’s internal problems. Pro-independence demonstrations ended in violence in 2010. Tensions rose again in 2016, with India’s murder of Burhan Wani, the leader of the group Hizbul Mujahedin. Hundreds were detained and dozens killed, following more protests. In 2017, the Indian government declared its lack of interest in peace talks as curfews were imposed. However, India employed the ex-intelligence officer, intelligence official, Dineshwar Sharma, to seek a consensus for peace. This was scuppered by Pakistan’s decision to release from house arrest, Hafiz Saaed of Lashkar-e-Taiba.

In 2019, India bombed Pakistan in retaliation for an SUV attack in Kashmir, attributed to the Pakistan-based Jaish-e-Mohammad. In August, India’s ultra-Hindu nationalist BJP party revoked Article 370 of the Constitution, effectively ending Jammu and Kashmir’s formal autonomy and leading to its de facto annexation.

India has had the atomic bomb since 1974, when it conducted an underground test (‘Smiling Buddha’). In1998, India began testing again, allegedly prompting Pakistan to test and formally declare possession. Like Israel, neither country is party to the Nuclear Non-Proliferation Treaty. During the 1980s, the US Reagan administration allowed Pakistan’s dictator Zia ul-Haq to develop nuclear weapons, partly in exchange for using Pakistan as a base to recruit and transport anti-Soviet Mujahiddeen, later rebranded ‘al-Qaeda’ by the CIA. In 2006, the US lifted sanctions on India, enabling it to import nuclear materials.

In July, shortly before India’s unilateral annexation, Trump told India’s prime minister Modi that the US would be willing to act as a moderator between the two states over Kashmir. This gave Modi leverage to annex: the logic being that India seizes the main prize and ‘negotiates’ smaller ones. This tactic is modelled on Israel’s theft of Palestine and its sham ‘peace process.’ Indeed, these events occurred around the time that Israeli prime minister Netanyahu was green-lighted by Trump to formally annex parts of Palestine. India is mimicking Israel in other ways. Just as Israel holds 1.8m Gazans hostage behind a wall, India is keeping Bangladeshis locked into their poverty by constructing a ‘security fence’ on the border. Just as Israel cries ‘anti-Semitism’ whenever pressure is put upon it to treat Palestinians with minimal decency, BJP apologists accuse Modi opponents of ‘Hinduphobia.’

As Britain’s Lord Desai signed a letter denouncing alleged anti-Semitism within the UK Labour Party under the lefty leader and anti-occupation activist, Jeremy Corbyn, Desai appeared on television in praise of India’s lockdown Kashmir. Labour’s new leader, Keir Starmer, seems to be to the left of the party on social issues (at the moment), thanks to pressure from the grassroots. But Starmer is a Blarite in his approach to foreign policy. A lawyer and former head of the Crown Prosecution Service, Sir Keir said: ‘Any constitutional issues in India are a matter for the Indian Parliament, and Kashmir is a bilateral issue for India and Pakistan to resolve peacefully.’

EVERY few years, scientists model nuclear winter. Recently, climatologists modelled ‘the potential effects’ of nuclear powers detonating ‘50 Hiroshima-size bombs — less than 1 per cent of the estimated world arsenal.’ They found that at least five million tonnes of soot would block out the Sun for fifteen years and reduce global crop production by 11 per cent. In 2015, Pakistan declared that it had developed tactical nukes, which are usually of a small yield and therefore more dangerous because they increase the likelihood of being used. India’s nukes are more advanced and capable of being delivered from sea, on land, and dropped from the air.

Nearly three decades ago, Hindus razed a mosque in Ayodhya, India, said to have been built on the site of the Hindu god, Ram. Today, Modi is back at the site to inaugurate the construction of a Hindu temple. Zafaryab Jilani, General Secretary of the All India Muslim Personal Law Board, says: ‘It is against the letter and spirit of India’s secular constitution for the prime minister in his official capacity to attend such a religious event.’

With these underlying cultural tensions creating a psychology of illogicality, a war sparked in Kashmir over, for instance, access to water from the Siachen Glacier, could prove fatal for us all. We will have ourselves to blame, in part, for not pressuring our leaders to forge peace: if there’s anyone left to blame after the atoms are split.

CounterPunch.org, August 7. TJ Coles is director of the Plymouth Institute for Peace Research and the author of several books, including Voices for Peace (with Noam Chomsky and others) and Fire and Fury: How the US Isolates North Korea, Encircles China and Risks Nuclear War in Asia (both Clairview Books).